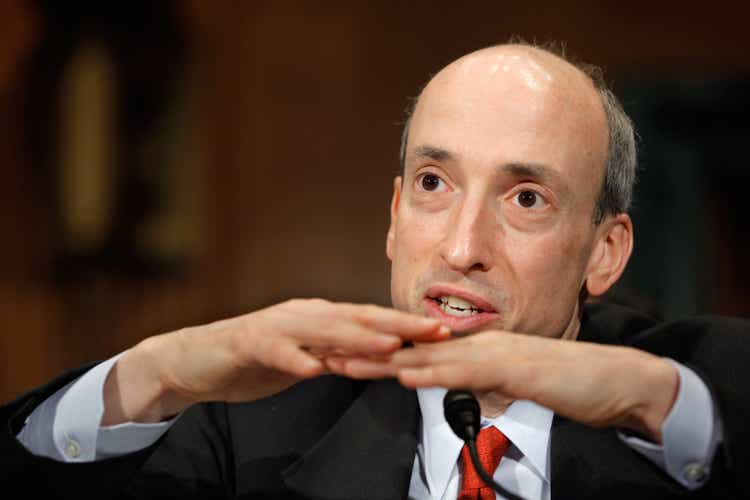 From the perspective of crypto proponents, the initial information on President Biden’s executive order on digital assets was encouraging and appeared thoughtful and balanced. Importantly, the detailed treatment tended to further legitimize, entrench and normalize the assets. There were numerous positive points on which to build going forward. And not unexpectedly, there was a positive price reaction among the major coins and tokens, led by Bitcoin (BTC-USD).

But as additional information rolled out, including an embargoed call between senior officials and the press from the day prior to the EO release, a number of sticking points and a meaningfully different focus emerged. For example, legacy regulatory goals and thinking around identity, sanctions screening, and revocability of transactions were stressed. Of course, these concepts are inherently hard to reconcile with crypto assets designed to be permissionless, decentralized, and trustless.

The EO called for measures in seven areas of emphasis. Simplified and paraphrased below, the occasionally overlapping measures instruct the executive branch agencies to develop or suggest policies over the coming months with the following goals:

It is useful to game out a few of the implications of these measures, both positive and negative. And the discussion that follows looks to provide a perspective and partial overview of the regulatory environment to help inform investments in the crypto space. The article primarily looks at the first goal, protecting investors, where the majority of the adverse regulatory risks reside.

This is not to say the near-term action on stablecoins to address some of the systemic risks inherent to the structure of crypto asset trading won’t have a meaningful negative impact on the space. This is especially true if market leader Tether (USDT-USD) is adversely affected by the Treasury department’s coming recommendations. For an interesting view on Tether here at Seeking Alpha, consider reading Tether: A Nearly $70 Billion Time Bomb.

Also, the particular areas of focus below are not meant to marginalize the possible impacts of any energy and climate initiatives in the EO. The Bitcoin network, which uses a proof-of-work consensus mechanism, faces strong scrutiny for its energy usage. The following directive is from the end of Section 5 in the EO (link above).

…address the effect of cryptocurrencies’ consensus mechanisms on energy usage, including research into potential mitigating measures and alternative mechanisms of consensus and the design tradeoffs those may entail.

…[and address] implications for energy policy, including as it relates to grid management and reliability, energy efficiency incentives and standards, and sources of energy supply.

The second portion above is interesting in its balance, as it mentions grid management and sources of energy supply. For a pro-crypto perspective of this topic, consider Ark Invest’s How Bitcoin mining could yield more renewable energy providing more reliable power.

…why wasn’t anybody worried there was going to be a need for cleanup in aisle three.

For investor protection in the crypto space, a major way this principle is being applied is by looking at whether or not the various coins and tokens are securities. This is important because if determined to be a security, a crypto project should, under the “same rules” doctrine, face similar regulatory supervision in areas like disclosure. And an issuer would be required to provide all material information to investors that is needed to make sound decisions about the project.

Two other related areas of consumer protection the EO directs regulators to address are protection of sensitive financial data and adequate custodial arrangements. And it is worth noting that the SEC has already been working with industry participants to prepare guidelines and best practices for custodians of digital assets.

So are these crypto instruments actually securities? The basics of what now defines a security come from the court case of SEC v. Howey. Put simply, the case determined a security exists when:

However, this Howey “test” is limited by other cases such as Reves v. Ernst & Young, where there are carve-outs for particular situations, especially where the situation is regulated by another framework, such as commodities law. And finally, there is the factually complicated Marine Bank vs. Weaver case. It said a particular certificate of deposit, and certificates of deposit generally, would not always qualify as a security, though they may have the indicia of securities incorporated in the Howey Test and could even be securities in some contexts.

Weaver instructs that each case “must be analyzed and evaluated on the basis of the content of the instruments in question, the purposes intended to be served and the factual setting as a whole.” This brings us to the practical application of these descriptions and principles to the varied instruments in the crypto space.

A growing view is that these U.S. precedents will allow blockchains and tokens to escape harsh retroactive regulatory sanctions. This is because they inherently defy easy categorization and bear only partial resemblance to traditional securities. Importantly, often they have evolved a decentralized structure that is similar, though not as absolute, to the Bitcoin network or Ethereum platform. And time and circumstance have not provided a fair notice of any clear regulatory requirements, a norm in U.S. regulatory principles.

And we know from court cases like SEC v. Ripple (XRP-USD) that both regulators and the courts are now considering arguments around decentralization, fair notice, and how to define crypto assets. A settlement in the case is expected in the coming months.

The settlement, which those in the crypto space media are expecting to be a “light touch” enforcement, could set a positive precedent for similar cases. This outcome would also provide a sentiment boost for the entire space by removing some of the perceived regulatory risks. And it would likely be price-supportive to platforms like Ethereum and the Bitcoin network even though they were not directly implicated in the case. Further, the Ripple case outcome likely informs the various agencies working under the EO as to a framework to present in their reports.

The task of building the framework by the different agencies will be complex. Just as one example of the differences in circumstance and structure for each crypto asset, consider the tweet Ethereum (ETH-USD) co-founder Vitalik Buterin highlighted in a post last July. The graphic in the tweet shows initial token allocations for various public blockchains. Note that Ethereum had a large public sale, Polkadot (DOT-USD) tokens went to “foundations” in large part, while Solana (SOL-USD) allocations primarily went to insiders.

So interestingly, some of the larger-cap, more commodity-structured coins, that are similar to Bitcoin, likely fall outside of what Chair Gensler has called the SEC’s “broad remit” and are not implicated in the securities laws. However, this is not to say these larger platforms will not see price pressure from regulatory action against new initial coin offerings or against digital asset marketplaces that choose to offer trading in the smaller, more security-structured coins or tokens.

Also causing trouble as far as categorization for regulation is the somewhat new concept of proof-of-stake consensus which was first used in 2012. Last September during an interview with The Block Chair Gensler again talked about the idea that staking has indicia of securities.

And that platform might be saying, as many of them do, we’ll give you a four percent or seven percent return if you stake your coins with us or you actually transfer ownership and we the platform will stake your tokens. That takes on all the indicia of what Congress is trying to protect under the securities laws.

For me, proof-of-stake consensus was hard to fully appreciate at first look. By staking, one is showing an investment in a platform which demonstrates they have an incentive to act in good faith for the platform. In the aggregate, these incentives secure the network. Holders offer various amounts of coins as collateral for a proportionate piece of the block validation rewards. Stakes are organized in pools with the pool organizer acting as a node to verify, vote on, and record transactions.

But it is important to note that holders who stake their coins may, and generally do, retain control of the assets. The coins are not used or consumed in the “business of validating”. One can stake or not stake over various different time periods using the same coins. So the primary risk to the purchaser of a stakeable crypto asset is independent of if the purchaser chooses to stake.

Because of the above, the proof-of-stake regime is hard to reconcile with the basics of the Howey Test concerning an investment of money. Staking also has arguments that are similar to a part of what proved decisive in the Weaver case, such as the de facto assurance or guarantee of the return of the asset. So staking may deserve a Reves type exemption and listing.

This determination is important because, for example, there are some KYC requirements involved in the sale of securities. A pool operator would not have the means, wherewithal or inclination to obtain and report stakeholders’ information such as income from rewards.

This is basically the same or similar discussion to that which dominated the digital asset portion of the infrastructure bill last year. As it stands, the law could be construed by the courts and regulators to implicate stakers, miners and wallet creators in the current regime to gather and report certain information under KYC rules. The bill added the text below to the definition of what is a “broker”, but failed to lay out any exemptions from its broad language.

However, it should be noted that following the bill’s passage in the Senate there was a colloquy among Senators, unbinding legally, that stressed and agreed that stakers, miners and wallet creators would not be considered brokers. Such is how the sausage is made on the legislative side.

In various speeches and discussions, Chair Gensler has unofficially laid out a possible framework for crypto regulation. The framework is not comprehensive and does not cover all the areas and agencies under the mandate from the EO. However, it does capture a lot of what is involved in the first two prongs, protecting investors and mitigating systemic risks. Below are five areas of focus for the regulators that Chair Gensler has raised and are likely at the center of the policy recommendation from the agencies working under the EO.

As discussed above, the recommendations will flow from a “same business, same risks, same rules” perspective. Crypto space participants will push back and lobby for a “light touch” on a case-by-case basis. This pushback may be predicated on arguments that crypto does not constitute a “same business”, as was discussed at length above concerning the proof-of-stake consensus mechanisms.

We have already heard calls for a crypto-specific agency from participants like Coinbase (COIN). While the EO definitely calls for what eventually constitutes a new policy framework, legislators and the agencies in Washington may prefer to house the process under existing institutions.

In either case, the detailed treatment seen in the EO signals growing acceptance of digital assets more broadly and further legitimized the crypto space. But conflict with legacy regulatory goals will persist due to crypto assets being designed to be permissionless, decentralized, and trustless. Despite these conflicts, fear, uncertainty and doubt are moderating as the regulatory path forward sorts out. As this clarity increases, broader institutional and retail participation in the space will increase demand for Bitcoin and the other large-cap coins like Ethereum.