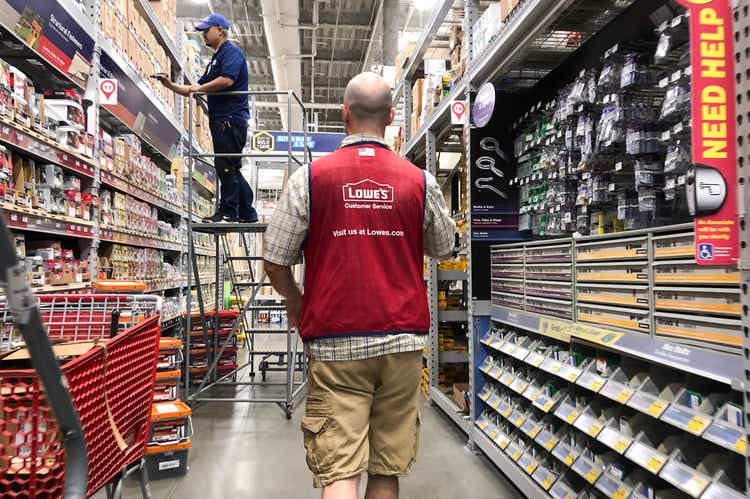 The market action in 2022 thus far has been transformative in terms of which sectors have led and which sectors have lagged. Home improvement was all the rage from the early stages of the pandemic, and the constituents largely soared as a result of otherworldly consumer spending. However, the group has been pummeled this year, which I believe is Wall Street saying there’s a decent likelihood of a consumer-led recession on the horizon. Whether that ends up being the case or not is very much in the air, but for now, I think there are some strong bargains available in the sector.

One such bargain is Dividend King Lowe’s (NYSE:LOW), a company that has a truly outstanding history of not only growing earnings, but returning billions and billions of dollars to shareholders via dividends and share repurchases.

We’ll begin with the chart, as always, to get a look at the recent price action and give us levels at which the stock could be a buy.

Firstly, the stock blew right through the first support level, which was ~$210. That was initially an area where the stock bounced last week but was quickly lost later in the week. That’s not a good sign. However, there’s another major support level at ~$200, followed by the prior relative bottoms made in the area of $180.

I initially thought the support level at $210 was going to hold and that the stock could rally from there. That didn’t happen, and unfortunately, the look of the stock makes it seem like it is entirely possible that we see $180, or something close to it, before it ultimately bottoms.

The accumulation/distribution line is still quite ugly, and I’m not seeing a lot of signs the stock is being bought on dips. The momentum indicators are showing some signs of life as they continue to bottom in the same area. That argues for at least a bounce from the $200 support area, but we’ll have to see what happens after that. After all, we had an initial bounce from $210, but it didn’t stick, so the bounce itself is only part of the equation; what happens after is critically important.

The good news is that Lowe’s is very oversold by these measures, and if we look in the bottom panel at the 10-day rate of change, Lowe’s is as oversold as it has been on that measure at any point in the past year. It’s down more than 14% in the space of 10 trading days, which is a huge move to the downside for this stock. That doesn’t guarantee it has to bounce, but it helps.

Finally, let’s take a look at relative strength, which is a mixed bag for Lowe’s.

The company has vastly outperformed its peer group, but as we can see in the bottom panel, the peer group has been awful. Lowe’s is a “best house in a bad neighborhood” sort of thing at the moment, so I’m not sure we’ll get much support here either.

I do think the home improvement retailers have been punished too much, and will eventually rally strongly. However, right now, Wall Street is voting with its money and is going elsewhere, so it may be a lengthy process.

The good news is that if you have a longer holding period, Lowe’s looks like an outstanding bargain at the moment.

Long-term growth for a reasonable price

Lowe’s and rival Home Depot (HD) have been engaged in a never-ending battle for supremacy in what amounts to a duopoly in home improvement retailing. That’s great for consumers because we get competitive pricing and service enhancements as the two competitors try and out-innovate each other in what is a very lucrative market.

Lowe’s has been in a years-long transformation where it has focused heavily on bringing in Pro customers, which are defined essentially as anyone that is not a DIYer. That market has grown exponentially since the Great Recession ended and things like construction and home renovations have soared. Lowe’s is very much still focused on growing that segment, catering to those customers with dedicated parking spaces, a special cashier/helpdesk in the store, and even sizing lots of inventory for Pro customers. That is working, but Home Depot is doing the same sort of thing. That makes focusing on Pro customers a price of entry rather than a competitive advantage for Lowe’s, so it’s not a differentiator.

What Lowe’s is trying to do to differentiate – and therefore take share from Home Depot – is switch to a model where it spends less time moving inventory around from warehouses to stores to shelves to consumers and instead streamlines its delivery model.

The idea here is that Lowe’s could see lower SG&A and freight costs for its inventory, meaning it can drive operating margin improvements, and spend less time holding inventory. These things drive tangible improvements in margins, cash conversion, and free cash flow, all of which help drive incremental shareholder value. These improvements won’t be fully in place until next year, but I really like this initiative to help Lowe’s boost its bottom line at a time when top line growth is harder to come by.

The other part of the strategy is making it easier for customers to pick up their orders, which has required investments in technology and storage space to facilitate that.

Again, these improvements don’t necessarily mark Lowe’s aside from the competition, but it does mean that Lowe’s is remaining at the edge of competitiveness and not falling behind. The company’s robust free cash flow affords it the ability to do this, and that’s something I think is important for the long-term health of the company’s growth trajectory.

Speaking of growth, let’s take a look at Lowe’s revenue revision schedule to get an idea of what’s to come on the top line.

Top line growth is expected to be rather modest in the years to come, but we know that home improvement exploded to the upside in 2020/2021, so some years of moderate growth wouldn’t be undue. I’m not concerned with this modest top line growth, because Lowe’s has other ways to boost earnings. In addition, you can see the revisions have been higher over time, which is what you need to see from stocks you own.

Now, let’s take a look at the other ways Lowe’s can boost EPS, and why I still think this stock is one that is worth owning.

We can see the outstanding sales growth that took place in 2020/2021 on the left, with comparable sales absolutely flying higher. I mentioned moderating sales growth this year and at least into next year, and after seeing this chart, it’s easy to understand why that’s the case.

Operating margin has followed suit, and Lowe’s has managed to boost operating profitability by about half since 2018. That’s an amazing accomplishment, and a record level of operating profits, so we should expect margin growth to be slower in the years to come.

However, the initiatives we looked at earlier, as well as some additional headwinds and tailwinds, are set to drive operating margins to a new record this year.

The things that are outside of Lowe’s control include supply chain inflation and cost of product inflation, but it is helping to offset that with continued focus on private label brands, among others. The bottom line on this is that Lowe’s is extremely focused on operating margins, which is what any shareholder should demand from a management team, and in the case of Lowe’s, it looks to me like there’s plenty of upsides here in the years to come.

I mentioned capital returns in the open, and Lowe’s has one of the best dividend streaks of any company, anywhere. That’s fantastic, but I’m much more interested in share repurchases, which Lowe’s has also done a very nice job of executing in its recent past. I love share repurchases because they juice EPS growth over the long term when executed prudently.

Lowe’s reckons it will return $40 billion to shareholders from 2022 to 2024, through a combination of FCF and higher net debt. The current market cap is $134 billion, so we’re talking big numbers here. The dividend is going to be a small part of this overall spending, so let’s focus on repurchases.

Below, we can see the company’s diluted average shares outstanding each quarter for the past several years (blue bars), as well as the YoY rate of change (black line).

Lowe’s has been very aggressively buying back stock in recent quarters, and given the move down in the share price, as well as record earnings putting plenty of cash in the coffers, I suspect 2022 will be a banner year for share repurchases. The company has told us it is going to spend tens of billions of dollars returning capital to shareholders, and I have to imagine management is out there buying right now with the price near $200.

That will help drive incremental EPS improvements, which we can see are already slated to be quite strong this year and in the near future.

We can see that not only are EPS estimates set to rise in the low-double digits for the foreseeable future – which is ~1,000bps better than revenue growth – but estimates continue to rise as well. If you just looked at this table of EPS estimates, you’d be forgiven for thinking the stock price of this company was making new highs. That’s the divergence I think presents an opportunity today; the share price and the company’s fundamentals are on two completely separate paths, and I’m not willing to bet Lowe’s has suddenly forgotten how to be a strong home improvement retailer.

Finally, let’s take a look at the forward P/E, which shows Lowe’s is as cheap as it has been for the past five years, barring the initial panic selling of the pandemic.

In addition, the longer that Lowe’s remains beaten down while EPS estimates rise, the better the valuation gets, and the better the risk/reward proposition becomes.

While I don’t think Lowe’s has necessarily made its ultimate bottom now that support at $210 was lost, I don’t think it has much further to go unless we get a full-on recession later this year. No one knows if that will happen but if it does, Lowe’s recovery may take more time.

But for now, if you have a longer holding period, you can begin to layer into your position in Lowe’s understanding that we could see a trip to $180 before the ultimate bottom is made. Over a long period, however, buying Lowe’s at 15X forward earnings has always worked out, and I don’t see why this time is any different.