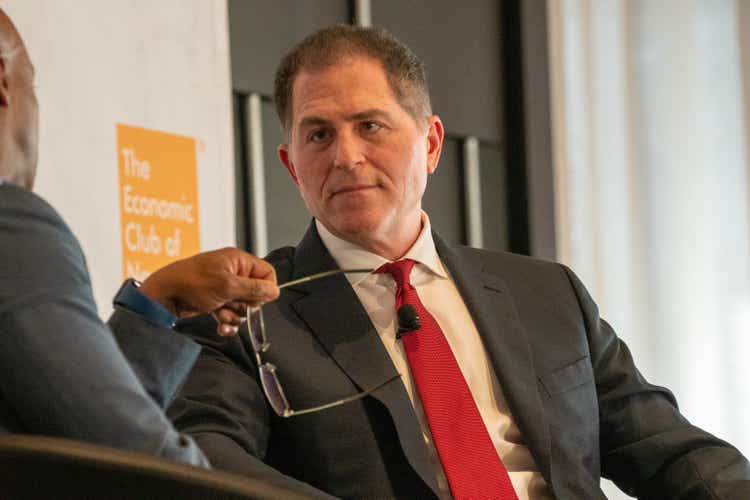 Dell (NYSE:DELL) isn’t your typical tech stock. The company isn’t growing rapidly, generates plenty of cash flow, and has a considerable debt load. Moreover, the stock trades at a single-digit multiple of earnings, not revenues, making DELL a legitimate value stock. The stock remains higher than its opening price of a couple years ago, but those gains look justified in light of the stronger fundamental position. In this report, I discuss where DELL stock might be in five years and why I view the stock as highly buyable at current levels.

When the stock came public, there was a lukewarm reception. This was understandable considering not only the heavy debt load, but also the fact that the company had previously been taken private by CEO Dell just several years earlier. That transaction was highly controversial because investors like Carl Icahn viewed the takeout price to be too low – CEO Dell paid $25 billion for a company that had generated $3.5 billion in net income in 2012. After several years of being a public company for a second time, it is high time to take a deeper look into the stock.

When you look through DELL’s financial statements, one thing stands out: this is no ordinary tech company. DELL grew revenue by 17% year over year – boosted by easy comparables. Over the past three years, revenue has grown at a 6% compounded annual growth rate.

Many tech companies nowadays have net cash positions. DELL has net leverage of 1.8x debt to EBITDA, which represents substantial improvement from the 4.2x debt to EBITDA position it had when it came public in 2018. Over the past three years, DELL has paid down $16.2 billion of debt.

Looking forward, DELL expects to grow revenue by 11% and earnings by 2% in the next quarter.

I note that operating income has not kept up with revenue growth because margins have compressed – largely due to supply chain constraints and overall pricing pressures.

What Is Dell’s Price Target?

Wall Street analysts are overall bullish on the stock with an average rating of 4.05 out of 5.

The average price target of $62.58 per share represents 29% potential upside.

Is Dell A Good Investment?

DELL isn’t growing that fast, but it has built a strong leadership position in multiple markets.

That leadership position is a double-edged sword. On the one hand it shows the company’s strong execution, but on the other hand, these are markets with modest growth rates, and being the top dog does not necessarily lend to accelerated growth.

In exchange for the slower growth, DELL has a more mature capital allocation framework. The company pays a dividend which as of recent stock prices yielded around 2.8%. The company has also repurchased stock, totaling $1.8 billion last year. The company aims to return 40% to 60% of free cash flow back to shareholders as it works toward bringing leverage down to 1.5x debt to EBITDA.

Over the long term, the company believes that it could grow revenues by 3% to 4% and grow earnings by 6%. That kind of growth isn’t going to excite many growth investors, but the ongoing shareholder cash returns are likely to boost the stock price.

Where Will Dell Stock Be In 5 Years?

Over the next three years, DELL is expected to grow earnings per share to $7.80.

That outlook may prove conservative considering that the company expects 6% annual growth and is buying back stock. I can see the company reaching at least $8.76 in earnings per share by fiscal 2027. The dividend might total $1.77 per share by then as well. At recent prices, the stock trades at 5.6x 2026e earnings and at a 3.6% yield (based on my projected 2026 payout). If the company keeps up its policy of buying back stock and paying out the dividend, then I doubt the stock continues to trade at these low multiples. I could see the stock trading up to 8x earnings in a base case, 12x earnings in a more bullish case, and 15x earnings in the most bullish case.

Is DELL Stock A Buy, Sell, or Hold?

7 Stocks to Own Until 2032 and Beyond
3 Safest Dividend-Paying ETFs to Buy Now
7 Safe Dividend Stocks to Buy for a Bear Market
Stock futures rise as Wall Street looks to snap losing streak
Will This Recession Be the Financial Crisis All Over Again?