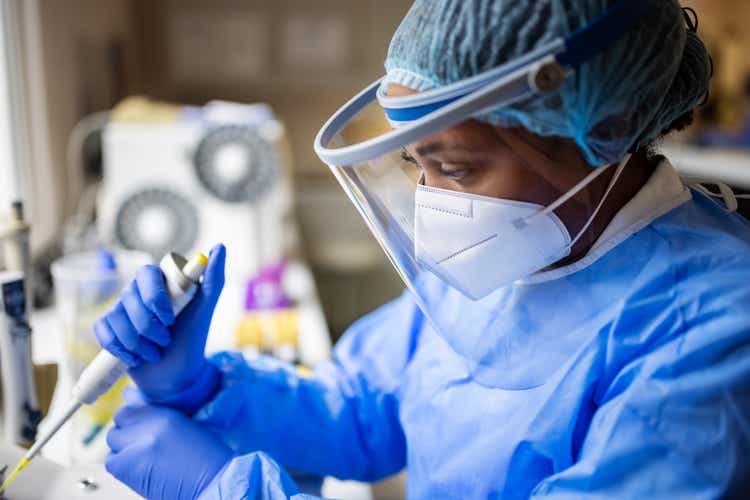 Harbour BioMed (HK:02142) out-licensed global rights for a pre-clinical bispecific candidate to AstraZeneca (AZN) in a $350 million agreement (see story). HBM7022 targets a tumor-associated antigen (Claudin18.2) and CD3, a combination that HBM believes will activate T cells and eliminate tumors. AZ will test the candidate in gastric and pancreatic cancers. HBM will receive $25 million upfront and as much as $325 million in milestones, plus royalties. It said the agreement for HBN7022 is a significant validation of its drug discovery technology. HBM is headquartered in Cambridge, MA, with facilities in Suzhou and Rotterdam.

Shanghai GenFleet Therapeutics out-licensed global rights (ex-Greater China) for a small molecule cyclin-dependent kinase 9 (CDK9) inhibitor to New York’s Sellas Life Sciences (SLS) in a $150 million deal (see story). GFH009, currently in Phase I trials in the US and China, has a unique mechanism of action that leads to lower toxicity and more potent efficacy, according to GenFleet’s read of the initial pharmacokinetic data in the Phase I trial. In 2014, Sellas was formed to develop an inhibitor of the WT1 protein, which is present in many cancers. Sellas in-licensed the drug from Memorial Sloan Kettering Hospital.

Boston’s ENSEM Therapeutics closed a Series A2 financing that brings its total Series A to $67 million. Incubated by CBC group since 2021, ENSEM is a biotech focused on difficult-to-drug oncology targets, using its Kinetic EnsembleTM platform to develop small molecule precision medicines for oncology. ENSEM integrates computational and AI deep learning technology with experimental validation to identify novel binding pockets and accelerate structure-based drug design. The A2 round was led by GGV Capital, with participation from Pavilion Capital, Cenova Capital, Mitsui and CBC Group.

Shenzhen Pregene Biopharma out-licensed US-EU rights for its anti-BCMA CAR-T candidate to CellPoint, a Dutch cell therapy company. CellPoint will make $22 million in upfront and near-term milestones, plus other unspecified milestones and royalties. CellPoint is developing CAR-T therapeutics for point-of-care use based on a Lonza device, Cocoon, which facilitates automated manufacturing of the CAR-T in one week. CellPoint has also started two clinical trials of its own CAR-T candidate that targets CD19 CAR for NHL and CLL.

LTZ Therapeutics, a Palo Alto-Shenzhen immunotherapy company, raised $17 million in a pre-Series A financing led by K2 Venture Partners, with Qiming Venture Partners and Tigermed participating. The company says its drug program is based on three goals: reduce immunosuppression, re-program innate immunity and modulate adaptive immunity. The proceeds from the financing will be used to develop the company’s three-pronged platform, establish its initial pipeline and build-out an operations team. LTZ (Life to Zenith) says its approach is based on reverse translational science and tumor biology combined with machine learning.

Shanghai Everest Medicines (HK: 1952) signed a memorandum of understanding with China Resources Pharmaceutical Group (HK: 3320) to form a partnered mRNA company. In September 2021, Everest announced a $500 million deal with Providence Pharma, a Canadian mRNA company, to develop Providence’s mRNA products in China including a clinical stage mRNA COVID-19 vaccine. The new mRNA partnership with CR Pharma will be built on Everest’s Providence-based portfolio, which includes several COVID vaccines and mRNA oncology candidates. Everest, which will be the controlling shareholder of the mRNA Co., did not disclose financial details.

Suzhou Kintor Pharma (HK: 9939) reported proxalutamide was 100% effective as a COVID-19 therapy in a US Phase III trial in preventing hospitalization and death (see story). The drug was 100% effective after seven days of treatment, but showed efficacy after only one dose. The trial, which enrolled all patients, no matter their vaccination history, was especially effective in middle-aged and elderly patients with high-risk factors. Proxalutamide is an ACE2 and TMPRSS2 inhibitor that prevents the entry of the SARS-CoV-2 virus into host cells. Kintor says it will file for Emergency Use Approvals in the US, China and elsewhere.

Suzhou Innovent Biologics (HK: 01801) reported its anti-PCSK-9 mAb successfully lowered cholesterol levels in a China Phase III trial that enrolled people with hypercholesterolemia. Innovent said IBI306 was similar in efficacy to western PCSK-9 therapies but with less-frequent dosings. After 12 weeks, IBI306 reduced LDL-C levels by up to 62% on a 450 mg dose administered every four weeks. Enrolled patients had non-familial hypercholesterolemia (hypercholesterolemia with cardiovascular risk) (HeFH). Innovent plans to file an NDA in China for the drug this year.

Sirnaomics (HK: 2257), a Suzhou-Maryland siRNA company, dosed the first subject in a US Phase I trial of STP707, a systemic small interfering RNA therapeutic to treat liver fibrosis in primary sclerosing cholangitis. The drug is administered by IV. STP707 is composed of two siRNA oligonucleotides targeting TGF-β1 and COX-2 mRNA. Over-expressions of TGF-β1 and COX-2 are thought to play regulatory roles in tumorigenesis. In preclinical studies, IV administration of STP707 caused knock-down of TGF-β1 and COX-2 gene expression in the liver and lung.

China plans to furnish US auditors with full access to the financial records of China companies that have US listings. The change seems to solve a looming crisis between the two countries, as the US is currently threatening to de-list all China companies that closed their financial documents to US auditors. The revised regulation will allow scrutiny of China-based companies’ books, while detailing how to handle national security information, which will remain protected. The new policy was announced over the weekend in a draft published on the website of the China Securities Regulatory Commission.

Editor’s Note: The summary bullets for this article were chosen by Seeking Alpha editors.

7 Blue-Chip Stocks to Avoid in a Bear Market
How to Read the Ticker Symbols for Stock Options
3 Undervalued Dividend Stocks to Buy Before Wall Street Catches On
Stocks making the biggest moves midday: Carnival, FedEx, Zendesk and more
HEXO Remains a Sell at 20 Cents