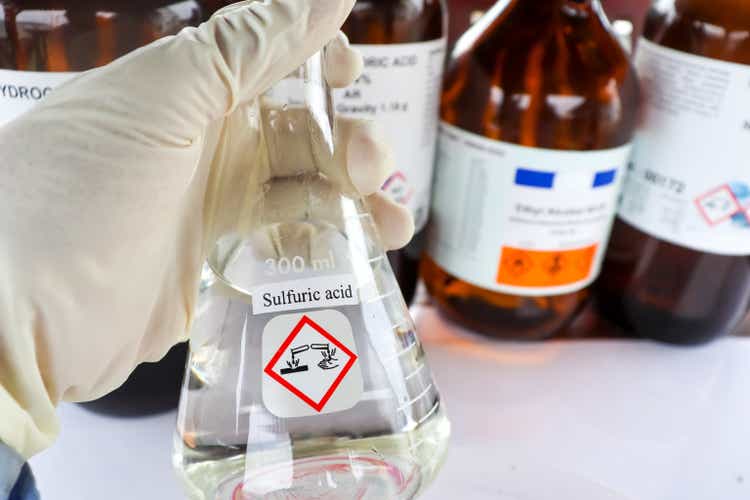 Olin Corporation (NYSE:OLN) is a company I’ve been requested to take a look at. I’m happy to do so, and following some research, I’ve come to the conclusion that Olin is an interesting company to take a look at and establish coverage on.

In this article, we’ll establish a basic thesis on Olin, explain what the company does, and what to expect with the company.

If you’re interested in basic materials investments, this company might be for you – read the article and fight out!

Olin Corporation – What does the company do?

Olin is an interesting business. This is a company that’s in the business of producing chemicals and ammunition. Olin isn’t investment-grade rated, but holds a BB+ credit rating – so it’s getting close. It also doesn’t have a great yield, giving us little more than 1.45% at current valuation, which is the same dividend amount it’s been giving us for years and years. The company hasn’t shifted this dividend in a very long time.

The company has a very long history – over 120 years and counting, and it’s currently based out of Niagara Falls, New York.

Olin employs 6,400 people across the world, and manages revenues in the billions.

It’s primary areas of business are the production of basic chemicals. This includes specifically, the chemicals of chlorine, sodium hydroxide, copper alloys, epoxies, vinyls, and ammunition. Many of the chemical business segments are actually additions, relatively late ones. The company has been involved in Chlor Alkali for going on 120+ years and is one of the world’s leading producers of Chlor alkali and derivatives.

The company produces Chlorine, Caustic Soda and hydrogen, which are co-produced commercially through the electrolysis of salt. Chlorine is a basic commodity used in the production of vinyls, urethanes, epoxy, water treatment and organic/inorganic chemicals. A major appliance for Chlorine is the production of Ethylene Dichloride, or EDC, and Vinyl Chloride Monomer, or VCM. The company is one of the largest global sources of EDC, marketing its own produced output and also buying secondary EDC for reselling. EDC and VCM are so-called chemical precursors for Polyvinyl Chloride, or PVC, a material which you’re familiar with and is one of the most common applications in pipe fittings, automotive parts, and other sources.

Its historical area was to supply nearby coal mines and quarries with explosives, and it’s been in the gunpowder and ammunition business since its inception. It’s fair to say that Olin’s business has a fair amount of ties to the wars that the United States is involved in. The company’s business was strong during Iraq and Afghanistan, and similar times.

This company has seen massive growth for its business segments since the drawdown in earnings in 2020, which saw EPS go close to negative.

Production for the company is global. Its facilities are in the USA, as well as Canada and Germany. For a full review of the company’s production and services in the Chlor Alkali and Vinyls segment, we can look at the following overview.

Aside from the company’s Chlorine and Alkali products, the company also produces epoxies for a variety of applications in the USA, Germany, China and Brazil as well as other nations.

The third product segment as well as reporting segment is known as Winchester. The company researches and manufactures sporting ammunition, such as shotshells, small caliber centerfire, rimfire ammunition, military ammunition, and industrial products.

All of this production is domestic. The company’s customers are domestic as well as international. It involves both private corporations as well as governments. 4% of company sales are to the U.S. government in 2021 – this was far higher during times of active military conflict.

In fact, Olin’s manufacturing capacity in all segments failed to meet the demand growth across the world. There is a massive demand spike for epoxies due to EV, Ship and Reefer/container fabrication, wind power, and infrastructure spending, all of which are Olin end markets. There’s also solid demand for the company’s legacy chemical products.

The company’s primary focus is the breaking of its cyclical behavior. Despite market demand, the company has no intention of increasing production capacity but will continue to grow by using existing and external capacity while lifting the value of its products, This will, according to the company’s targets, flatten out earnings but making them more predictable. The company forecasts a 2022 EBITDA above the 2021 level. The drivers for the company’s markets are almost universally positive.

The bullish case for Olin is based on a shift from a cyclical thematic to a structural thematic, which the company is currently trying to achieve. The mix with which it’s attempting this is solid fundamentals, solid execution of capital, and executing on what the company considers its contrarian model.

This hasn’t been an easy development for the company. It’s been a process of several years, with the company moving through various phases.

The company is successfully growing the Winchester brand, seeing record amounts of recreational shooters, up to 57 million participants, and addressing 220 million adults and youths for future growth. The company has also started licensing the brand.

In short, this company is doing well – and its earnings are showing excellent improvements after a truly horrible COVID-19 impacted in 2020. The question, of course, is if the company can maintain the upside and earnings level once demand normalizes. It’s easy for a company to work things out when literally every customer is clamoring for more products than you’re able to produce and sell.

Things are very different when things turn around.

Olin’s valuation has reached interesting levels. The company has already announced that it now targets $10/share EPS levels, which would imply a vastly different valuation from the EPS levels we’ve seen in the company for the past 10 years.

The key question when it comes for the valuation of Olin, is if the company has the fundamentals and forward earnings to actually maintain this in the long term. Forecasts say yes, but these forecasts are problematic, to say the very least.

There’s a lot of historical ambiguity and uncertainty to these results. Let’s make sure to understand that analysts usually overestimate Olin by between 20-60%, and results in the long term haven’t been favorable for investors at all times here.

While the current trend certainly is good, there’s no telling how far or how long this will go on. Company fundamentals, including a low yield and a substandard, junk-rated credit rating don’t give a whole lot of confidence here.

The bullish scenario in the case of a 12-14X P/e normalization on the basis of new earnings is an annualized RoR of more than 25%, with around 100% 3-4 year RoR. This is, of course, a great return if it does materialize. The question is how likely it is.

I’m considering the visibility for earnings low, despite forecasts. Even maintaining half of the forecasted EPS once things normalize would be excellent. The target based on the bullish thesis goes up to $108/share. S&P Global analysts give the company a range of $57-$95/share – so even the most bullish of analysts disagree with the forecast EPS that would align with a $8-$9 EPS – let alone a $10 EPS.

The lowest forecast level essentially looks at today’s valuation, while expecting things to normalize to lower levels, resulting in a relatively flat RoR over time.

Which way you take isn’t the easiest thesis or path to decide on. My take is the following.

While fundamentals exist that speak in favor of a positive pricing development for Olin and for the company to fully realize that 20-30% annualized RoR, as an investor I am unwilling to put my faith in or “bet” on this happening. Olin has BB+ credit, below 2% yield and a volatile history. The fact is, I can get 20-30% annually safer and more conservative and with a better yield than with Olin.

This does not make Olin unattractive – only less attractive. I would approach Olin with a different tact and perhaps expect a normalized EPS level of around $6-$7 for the long-term based on demand normalization in context with the company’s plan not to increase its capacity. This would imply a valuation closer to $60-$70 per share. I normalize this at around $65/share, which becomes my initial PT for the company.

This might be lower than some analysts shoot for – but I believe it fairly reflects the company’s current position in the market, including the upside and more importantly, including the conservative considerations needed for a junk-rated chemical company.

It’s not my intention to make light of the company’s recent successes. Olin has successfully pivoted its business model and delivered earnings growth at an astounding level. I wish that I’d bought Olin far earlier – as I invest heavily in chemicals and various commodities in a variety of ways.

However, the very cold-hearted fact is that there are investment opportunities that, to my mind have an upside that is:

These simple points direct myself to choosing other investments above Olin – at least until I’m fully exposed/diversified into those investments. Because while we do work with a market of stocks and not a stock market, Company A is legitimately better than Company B despite similar RoR, if company A has better overall safeties and securities to fall back on, and offers an objectively better upside based on simple yield with a historical coverage/DGR.

So based on this, and while I do view Olin as a “BUY”, it comes with a big disclaimer that you need to compare it to other businesses that share some of the upsides and better fundamentals that are available to them today. They exist – I know because I write about them every week.

Remember, I’m all about:

This process has allowed me to triple my net worth in less than 7 years – and that is all I intend to continue doing (even if I don’t expect the same rates of return for the next few years).

If you, however, want to grow your money conservatively, safely, and harvest well-covered dividends while doing so, and your timeframe is 5-30 years, then I might be for you.

Olin is a “BUY” with a decent upside here.

Thank you for reading.

Don’t Chase After the Latest Surge in Nio Stock
4 Energy Stocks With Dividends to Add to Your Buy List
7 Bargain Income Stocks to Buy and Hold Forever
Stocks making the biggest moves premarket: Kellogg, Lennar, Spirit Airlines and others
Crispr Therapeutics: Use The Rally To Cut