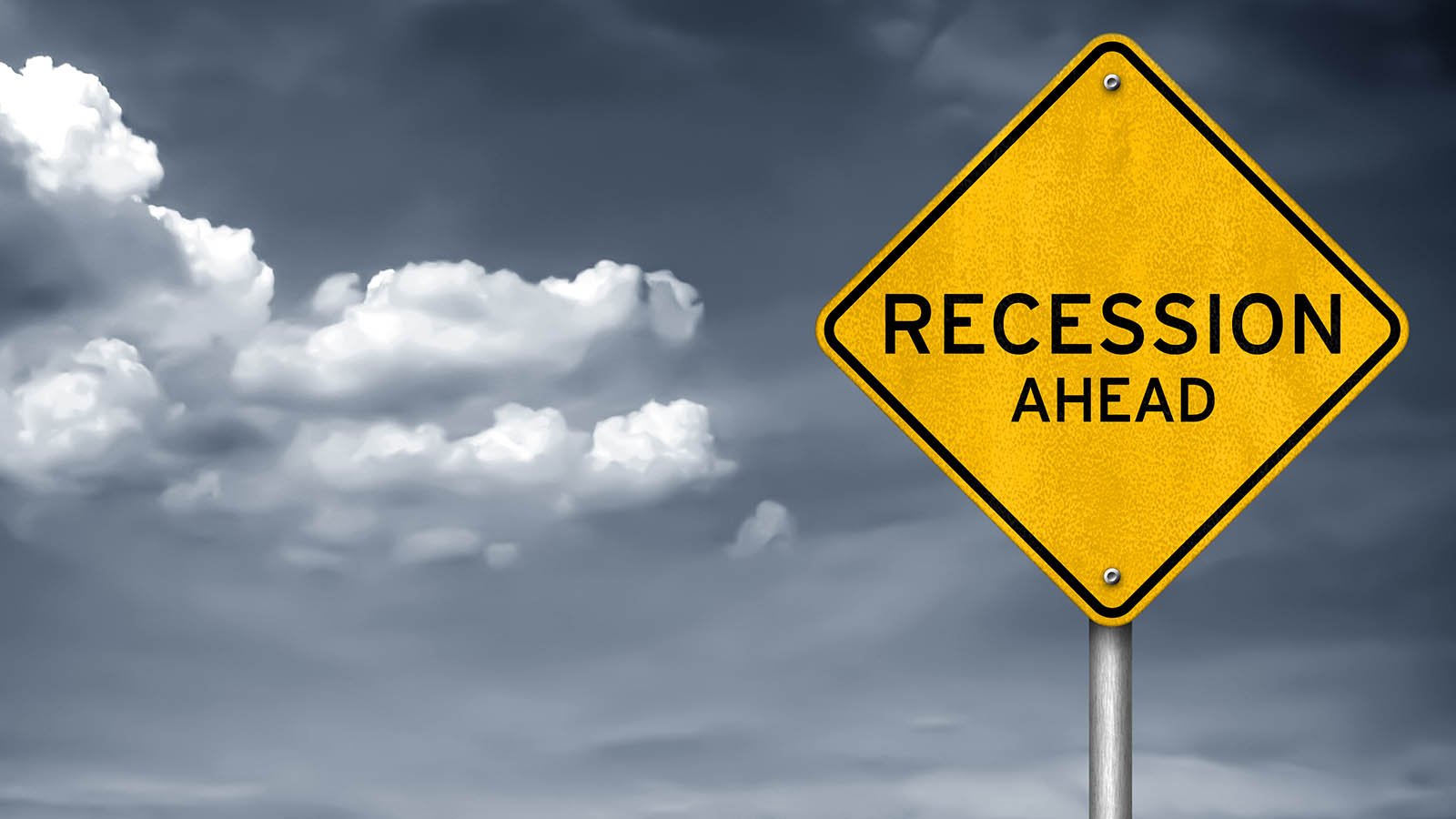 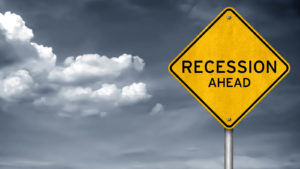 Deutsch Bank (DB) is calling for a recession by late 2023, as is hedge fund manager Leon Cooperman. And so is “bond king” Jeffrey Gundlach. Indeed, according to a survey from the Wall Street Journal, 28% of economists expect a recession within the next year.

So is it time to sell everything and run for the hills? No.

While everyone is fearing an incoming recession, my team and I have identified a once-in-a-decade market phenomenon emerging right now. And it only emerges when folks are concerned about a recession.

By capitalizing on it today, you can not only survive a 2023 recession. You can thrive — and make generational amounts of money.

So what’s this phenomenon all about? How is it going to help you thrive during a recession? Let’s find out.

To understand what my team and I have identified, we first need to understand stocks’ behavior patterns.

In the short term, stocks are driven by myriad factors. Geopolitics, interest rates,  inflation, elections, recession fears — so on and so forth.

Long-term, however, stocks are driven by one thing only: fundamentals.

That may sound like an oversimplification. But honestly, it’s not. 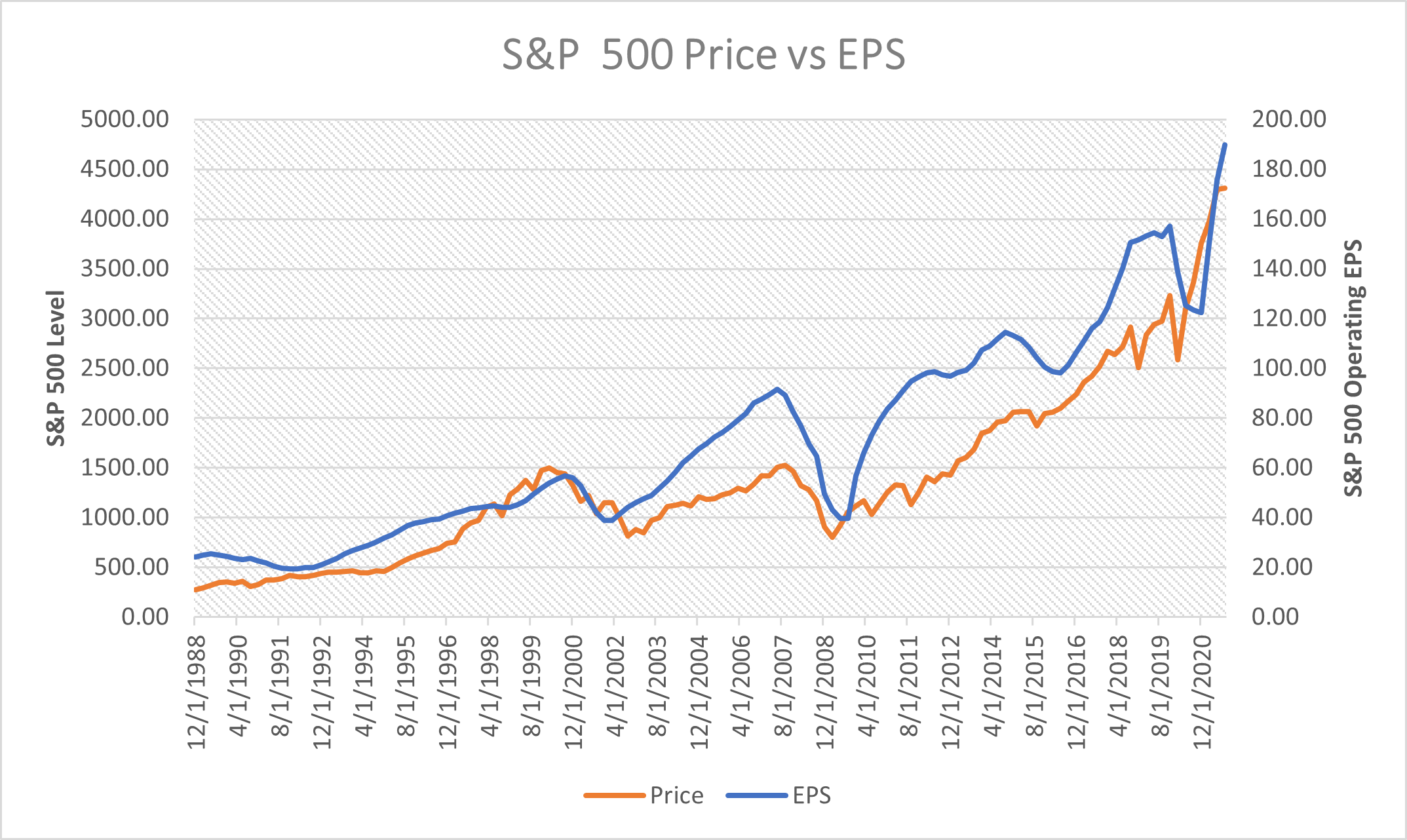 As you can see, the blue line (earnings per share) aligns almost perfectly with the orange line (price). The two could not be more strongly correlated. Indeed, the mathematical correlation between them is 0.93. That’s incredibly strong. A perfect correlation is 1. A perfect anti-correlation is -1.

Therefore, the historical correlation between earnings and stock prices is about as perfectly correlated as anything can get.

In other words, you can forget the Fed. You can forget inflation. Forget geopolitics, trade wars, recessions, depressions and financial crises.

We’ve seen all that over the past 35 years. And through it all, the correlation between earnings and stock prices never broke or even faltered.

At the end of the day, earnings drive stock prices. History is clear on that. In fact, mathematically speaking, history is as clear on that as it is on anything.

And the phenomenon my team and I have identified has to do with this correlation. In fact, it’s centered on a “break” in this correlation — which only arises when recession fears are peaking. And it has produced the greatest stock market buying opportunities in history.

About once a decade, a rare anomaly emerges in the market wherein earnings and revenues temporarily stop driving stock prices.

We call this anomaly a “divergence.”

During divergences, companies tend to see their revenues and earnings continue to rise. Yet their stock prices temporarily collapse due to macroeconomic fears. As a result, a company’s stock price deviates from its fundamental growth trend.

Every time these rare divergences emerge, they become generational buying opportunities, where stock prices boomerang to their fundamental growth trends.

Let’s look at a few examples.

This phenomenon emerged in 1989, on the heels of the Savings and Loan Crisis. Investors assumed a large part of the American financial system was on the brink of collapse. Everyone was worried about a recession. World-changing computer stocks like Microsoft (MSFT) and Intel (INTC) collapsed 30% or more over the course of a few months.

But while fears caused those stock prices to drop, those companies saw revenues rise more than 10% over that same stretch. This created a divergence. Stock prices were down, and revenues were up.

Both stocks then rallied 70%-plus over the subsequent year and surged more than 500% over the next five years.

Huge gains — some would even call them generational.

Making Cash During the Dot-Com Crash

Let’s fast-forward to 2000. During the Dot-Com Crash, another divergence window emerged. Yet again, everyone was worried about a recession. Those fears caused internet stocks to collapse, with e-commerce giant Amazon (AMZN) tanking 94% in the early 2000s.

But over that same stretch, the company’s revenues rose 145%. Ultimately, this divergence ended with Amazon stock rising 185% over the subsequent year. And it soared 433% over the following five years.

Starting to see a pattern? Well, this phenomenon emerged again in 2008, during the Great Financial Crisis.

Amid that, Salesforce (CRM) stock dropped 70% while its revenues rose 20%. What happened over the following year? Salesforce stock snapped back, rallying 185%. Over the next five years, the stock gained a jaw-dropping 861%. 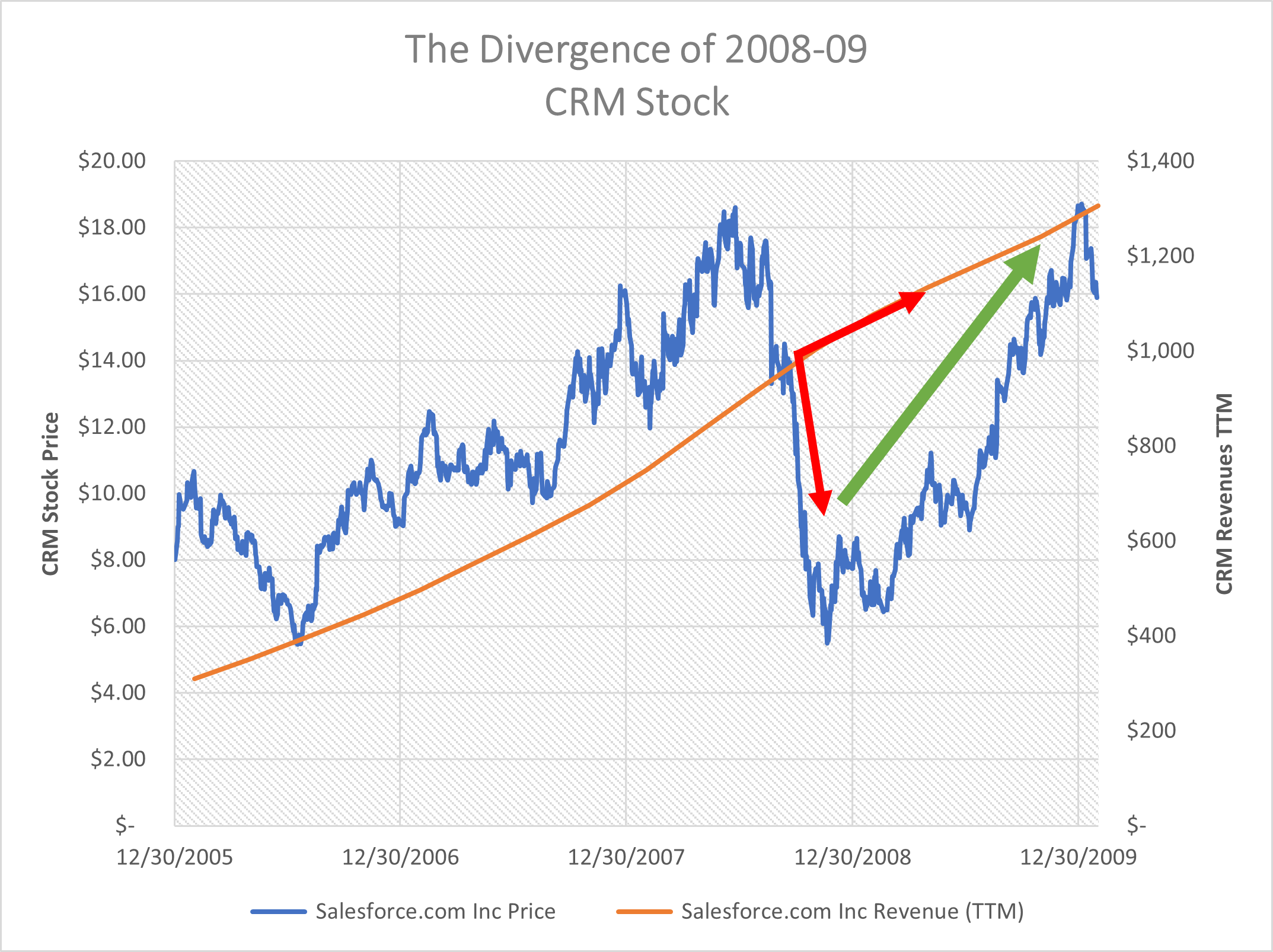 You get the point. Divergences between stock prices and fundamentals create exceptional and rare buying opportunities. Investors can triple their money in a year and make nearly 10X returns in five years.

The funny thing about history is that it tends to repeat itself.

And right now, my team and I are observing another great divergence emerging today within a specific group of stocks. Buying those today could be like buying Microsoft in the late 1980s, Amazon in the early 2000s, or Salesforce in 2008.

The Final Word on Recession Prepping

You don’t need to follow markets closely to know there’s a lot of macroeconomic fear out there today.

There’s a war in Europe. Inflation is running at multi-decade highs. The U.S. Federal Reserve is aggressively tightening monetary policy. The yield curve has inverted. Gas prices are running to record highs, and recession fears are rampant.

Across the market, companies are seeing their stock prices fall sharply while revenues keep growing.

Previous divergences created excellent (even life-changing) buying opportunities. This one will be no different. In fact, per our analysis, the divergence we’re seeing today is the biggest one yet. This means the upside potential over the next 12 months is bigger than anything we’ve ever seen.

So, while everyone is worrying about a recession, we’re going to capitalize on the biggest market phenomenon of the decade. And we’ll survive and thrive if a recession comes our way.

But this research is exclusive. So, if you’re hoping to get your hands on it when it’s ready, you’ll need to join our flagship advisories.

Interested? You should be. We’ll keep you updated on how to capitalize on the investment opportunity of a lifetime.