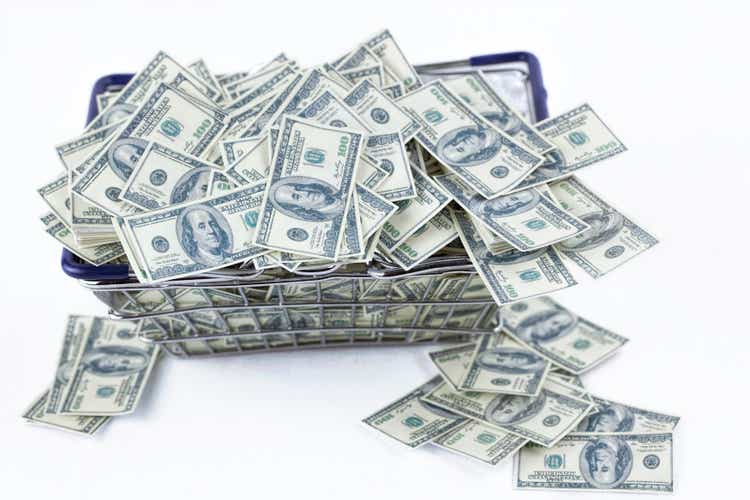 We find it surprising that Informatica’s (NYSE:INFA) story is still not understood by the markets despite remaining a leader in multiple data-management related areas.

The only possible reason for the stock price to lag is the lack of a large subscription revenue base, which appears to be changing.

Along with the growth in cloud revenue, we expect Informatica’s free cash flows to significantly expand (even ahead of what the management is projecting), making the stock a multi-bagger.

A bit of history

Informatica was a publicly-traded company before going private in 2015, with CPPIB as a significant shareholder (who continues to date). At the time, the concepts of cloud and subscription were gaining traction amongst the investor community. Along with the Canadian Pension giant (CPPIB), Microsoft and Salesforce had also invested in Informatica, possibly trying to stay ahead in the data-driven world.

The erstwhile board had backed the $5.3 billion deal, which was expected to allow Informatica to experiment with its technology stack without coming under the glare of the markets.

Informatica relisted on NYSE in October last year, reaching a peak valuation of over $10.7 billion in December 2021 and currently is around $6 billion.

Informatica has been a long-standing leader in the enterprise data space.

The company has been a pioneer in big data and has adapted its technologies to create IDMC, or the Intelligent Data Management Cloud.

IDMC helps collate, curate and correlate data across an organization’s data assets. This data and analysis can then be used to manage user experiences, develop automation strategies, and build out analytics to infer behavioural trends better. This strategy is similar to that of Adobe’s:

Adobe was collecting user behaviour data of paying customers to understand their needs and building an analytical engine on top to help serve more, all with the knowledge of employers and while complying with every data and privacy law there exists.

Source: Adobe: Do Not Mistake This Cash Flow King To Be A Fallen Star

Notably, when Informatica had gone private, Bruce Chizen, former CEO of Adobe, had joined its board.

We further note, from Informatica’s filings:

To leverage these transactions, at the heart of the IDMC sits Claire or Informatica’s artificial intelligence engine.

Our cloud-native platform leverages over 50,000 metadata-aware connections that continuously scan our customers’ data to create rich and highly contextualized metadata to create and manage a metadata system of record that acts as a single source of truth about their data. This allows our AI engine, CLAIRE, to help customers access better data faster, make contextual recommendations about data relationships, uncover novel insights about their business and automate previously manual tasks. As more customers adopt our platform, CLAIRE continuously analyzes new transactions, configurations, rules, and decisions and uses this increased intelligence to drive further automation and deliver better insights to our customers, which in turn we believe will continue to accelerate the adoption of our platform.

The IDMC leads to a simple bifurcation of revenues: subscription (cloud), non-subscription (software, but non-cloud) and support.

While cloud software should continue to grow on increasing transactions, non-cloud (on-prem) revenues will soon be subsumed in the subscription business model.

Non-software revenue has been on a downward trajectory and is expected to decline further. The fall in professional and services revenue is a planned move, occurring due to Informatica’s growing cloud focus (and thus ARR).

Using this data, we arrive at the expected pricing per transaction of cloud revenue.

Despite expectations of pricing continuing to remain weak, the volume growth should give a significant impetus to cloud revenues.

As the high-margin cloud revenue begins to dictate the trajectory of the overall revenues, we think FCF should also see a similar growth trend.

Informatica’s 2022 free cash flows make it relatively cheap at 18x. Looking out to 2023, the company trades at an inexpensive P/FCF of 10x.

Informatica’s business can be considered a ‘utility-type’ business in the tech space, given the data-centricity in the business model. While most of the cloud plays are at the application layer and the hyperscalers, Informatica is one of the few at the data layer.

The major risks that we envisage are:

Considering Informatica’s integrations with the hyperscalers, we think a re-rating in the company’s valuation is imminent. In addition, Informatica’s industry leadership in deep data management capabilities and strong institutional backing (CPPIB still holds c.30%) will further help sustain and build upon the valuation re-rating. As a result, we think the stock is significantly undervalued and can become one of the best picks for 2022.