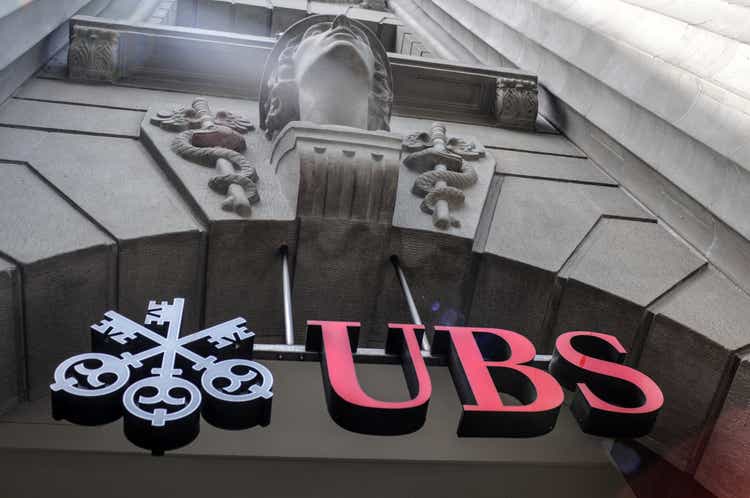 UBS Group (NYSE:UBS) stock price fell low enough in the beginning of March. It was mainly due to geopolitics. Since then it has started its rebound but the stock price is nowhere near its February highs. The bank will report its 1Q2022 earnings results on 26 of April. The sanctions against Russia will not have a major direct effect on the bank’s revenue and profits, I think. At the same time, high volatility is usually favorable for the banking sector’s revenue. I am bullish on the stock if nothing extraordinary happens to the global economy in the near future. But let me dig into some more detail.

To start with, many European banks’ stocks corrected in the beginning of March following the news of the sanctions against Russia. That is not surprising since the banking industry is quite sensitive to all kinds of negative political and economic news due to its cyclicality. I composed a graph of the largest European banks’ stock prices. These are BNP Paribas (OTCQX:BNPQY), HSBC Holdings (HSBC), Credit Agricole (OTCPK:CRARF) and UBS Group, of course. We can clearly see that BNP and Credit Agricole share prices reacted dramatically to this political event. However, HSBC and UBS stock prices did not change that much.

This is not surprising, given the fundamentals of UBS. The thing is that large companies and stable banks have quite low betas. That means their shares are less volatile than these of not so stable businesses. Although these other banks are bigger than UBS, UBS is more stable than the other banks.

Europe’s financial sector has also recently suffered from a selloff since Capital Group (OTCPK:CGHC), one of America’s largest investors sold its stakes at Deutsche Bank (DB) and Commerzbank (CBK.DE). This made the stock market worry about the general financial sector. So, even UBS shares got cheaper. But in this article I will explain why UBS shares are worth considering for a conservative investment portfolio.

At short, UBS is a bank for the rich. 50% of all the billionaires in the world are clients of this largest Swiss bank. In fact, UBS is the largest private bank in the world. In 2021 it was the third largest bank in Europe by the market capitalization. Much of the bank’s market cap is due to these high-net-worth clients.

A lion’s share of the bank’s profits is due to global wealth management. From the $10 billion pre-tax profits 48% is due to the global wealth management department. So, we can safely say this area is the bank’s main specialization. Managing wealth involves meeting individual clients’ specific financial needs. As I have mentioned before, UBS mostly manages wealthy private individuals’ money since it is a “bank for the rich”.

Impact of sanctions against Russia

Rich clients’ main needs include stability, privacy, conservatism but most importantly reliability. That is what Swiss banks are famous for. However, as the Swiss government said in an official statement, Switzerland broke with its tradition of remaining neutral in geopolitical conflicts by adopting EU sanctions against Russia. This might inspire certain worries not from the side of the bank’s Russian clients but from its other customers. In fact, they should doubt the stability and privacy of their savings because if another political situation comes up, their money might well be affected too.

However, in 2014 Switzerland imposed a ban on imports, exports and investments concerning Crimea and Sevastopol. So, it is not the first time Switzerland broke with its tradition of remaining neutral in geopolitical conflicts. That is why there is nothing extraordinary here.

UBS is not particularly exposed to Russia. That is why the impact of the sanctions should be minimal. The Swiss bank announced in its annual report it had around $200 million of exposure to Russian collateral assets. The bank’s direct risk exposure to Russia was $634 million at the end of 2021, that is just a small portion of its $20.9 billion exposure to emerging countries.

We can compare this to Austria’s Raiffeisen with a direct exposure to Russia of €22.9 billion ($24.9 billion). Société Générale, Crédit Agricole and ING reported €18.6 billion, €4.9 billion and €6.7 billion exposure, respectively.

So, we can safely say UBS is not particularly exposed to any secured funding and other assets linked to Russian companies and citizens. That is very important for the bank, given the current circumstances.

Recent news from the bank and the outlook

There was also no bad news related to UBS. In fact, on 30 March the Swiss bank announced it expected to buy back shares worth up to $5 billion under both the now-concluded 2021 and the new 2022 repurchase programmes by the end of this year. The new $6 billion repurchase plan began on 31 March 2022. So, in fact quite recently positive news was announced.

The bank is going to report its results on 26 April 2022. In my view, high volatility is actually a great positive for financial institutions, their revenues and profits. We clearly witnessed volatility in February-March. When the prices of various asset classes fluctuate, it means banks’ customers buy and sell securities. This means they have to pay their bankers higher fees, which, of course, allows them to earn higher profits. So, in that respect we see lots of positive news here. The only downside, in my view, is the chance we might have a recession in the near future.

In spite of its stock rally in the last two years, we can clearly see the bank’s stock is not overvalued at all.

Here I have compared the bank’s price-to-earnings (P/E) ratio to this of other major European banks.

Generally, if a bank’s P/E ratio is 10 or below, this bank’s stock is quite undervalued. The ratio of UBS is less than 9. That is why the stock of UBS is not overvalued compared to that of its peers’.

What is more, this indicator is not at its all-time highs, which means there is some potential growth for the stock.

The price-to-book (P/B) ratio is even below 1, which means it is quite good value for money. That is because a ratio between 1 and 3 is reasonable, whereas an indicator below 1 is considered to be very good.

What makes UBS stock particularly attractive is its return-on-equity (ROE). If we look at the history, we will see that the bank’s ROE is at its all-time highs, whereas its stock price is somewhat below the levels reached in 2015 and 2018.

All that means the stock is not overvalued.

We see here that UBS is a strong Swiss bank which is hardly affected by geopolitical tensions resulting from sanctions against Russia. The stock is nowhere near overvalued compared to its peers’, whereas the recent selloff could be used as an opportunity to invest in this bank’s shares. The stock is less volatile, whilst its return-on-equity is high. The only risk I personally see is that of a global recession.

What Is a W-9 Form and How Is It Used? A Guide
6 Dividend Income Stocks With Better Yields Than the S&P 500
Should You Buy Apple Stock? Two Key Issues to Consider
7 Meme Coins to Avoid no Matter What Your Friends Say
Gamestop Won’t Make You Rich Here, But It Could Break You