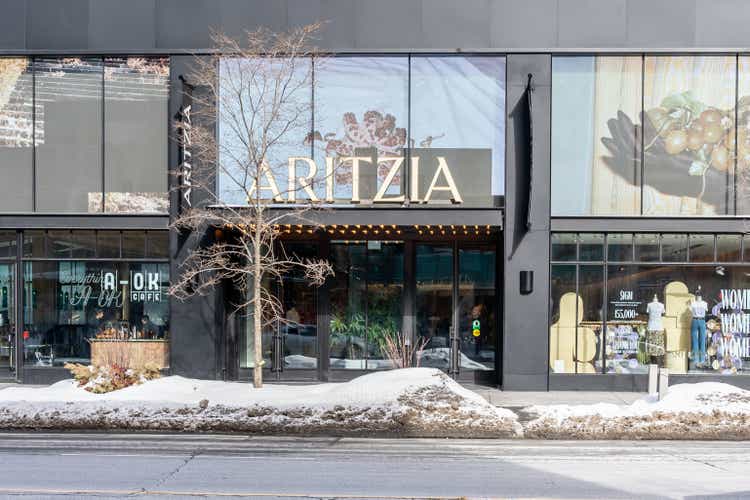 While their stock price has fallen with the broader market, Aritzia Inc. (OTCPK:ATZAF) is a buy today, given their strong growth prospects and their robust sales strategy – the fundamentals support a $60 ($46 USD) price target. Aritzia Inc. is based in Vancouver, B.C., and sells apparel and accessories for women in North America. The company offers a multitude of lines through boutique locations across North America and online. ATZAF sells the majority of their products under three key brands: the Wilfred, Babaton and TNA. ATZAF also now sells men’s apparel, with a recent acquisition of Reigning Champ. The company was founded in 1984 in Vancouver and has expanded to now have retail presence in Canada and the U.S. As of May 8, 2022, the company operates 108 boutiques and sells product online in over 200 countries.

While COVID slowed ATZAF’s momentum plans when both the U.S. and Canadian governments closed malls and retail stores, their digital presence stemmed the bleeding. The company grew their sales to an all-time high $443M in Q4 – notably with $181M digitally, which was 41% of their sales mix. The company has focused on U.S. growth as their primary driver into the near future, and they have proved to be penetrating the market well, notching record net income of $157M last year, a 29% CAGR over 5 years. Q4 U.S. revenue increased by 108.8% to $216.8M from Q4, and now comprises 49% of their geographic sales mix. ATZAF has historically had a geographic sales mix that focused in Canada, with 67/108 boutiques located there. With the strong customer retention and expansion in select U.S. states that mirror the demographics in their Canadian locations, brand penetration has started to pay dividends. The company’s focus in Canada has started to shift to distribution and warehousing, as the brand has been popular and remains a cash cow. ATZAF expects to spend over $35M in CAPEX for warehousing in Ontario and B.C. as they look to control more of the supply chain. The company has historically had a stable capital structure, with just 110M shares outstanding and no debt.

While ATZAF brands themselves as everyday luxury, they are closer to the fast fashion industry within apparel when analyzing their top selling brands of Aritzia and TNA. Their key competitors include Lululemon (LULU), American Eagle (AEO), and Urban Outfitters (URBN). The global fast fashion market is projected to expand at a cumulative rate of approximately 7% for the next few years, which would constitute $40B in sales through 2025.

When comparing them to their competitors, ATZAF holds two key advantages. The first is their growth strategy. ATZAF is well known in Canada, and their model of few but large and interactive boutiques with diverse personnel help keep costs in line. ATZAF has focused their locations in strategic locations, focusing on walkability, the ability to showcase store inventory, and digital gift cards that maximize in-store engagement and digital sales. The second advantage has been their strong margins. Given volatile cycles and global supply chain woes, their gross margins of 40%+ should support their earnings targets. With the strongest growth among their peers, ensuring that their gross margin remains elevated is important, as chasing growth with low value is not sustainable. This has allowed them to receive a premium valuation from analysts on the street.

Additionally, the company has been slowly increasing their fleet, and they plan to open 10 new stores this year. Their phased approach to blitzing the U.S. market has been successful and is different from peers, with many reducing bloated store-front totals. ATZAF believes that boutiques serve an important purpose in driving brand awareness and customer retention, and given their futuristic designs, they should out-perform older stores from their competitors.

ATZAF announced that Brian Hill, founder and CEO, will step down from his perch and become executive chair. Jennifer Wong, the current COO and an Aritzia employee for over 30 years, will take over the CEO position. While there is execution risk with new leadership, considering Jennifer has been with the company and knows their core competencies, I see the company continuing to succeed into the future. However, when investigating any apparel brand, there are risks that are inherent to the business. There is unmitigable risk concerning the inability to get ahead of and respond to changing consumer preferences. There is also danger associated with race to the bottom pricing pressure for sales volume and inventory management. Another key risk is the potential impact from COVID-induced lockdowns. The company is still reliant on in-store sales, and large boutiques that are used for promotion, inventory testing and engagement can be at risk of closure for longer than smaller stores. While the company’s digital sales increased at a 52% clip vs. 2019, digital revenues cannot fully stem a revenue drop in physical retail locations. Although ATZAF’s stores are in Canada and the U.S., expansion in other high growth locales (notably China) would be tough to achieve given their revolving lockdowns.

Should ATZAF deliver on even close to their forecasted growth, its stock price is poised to bounce back and retain a premium valuation. With targeted improvement in both physical and digital sales, along with male apparel, ATZAF is primed to continue to increase its free cash flow and operate efficiently. Given their strong 2021 performance, their cost of debt shouldn’t dramatically rise above 5%, should they attempt to leverage in this environment. I provide a blended tax rate as revenues in both U.S. & Canada become material to future results.

I forecast the continuing value of over $3B, given a 22% blended revenue increase for three years, before increasing two future years to 24% growth as their U.S. penetration improves. I see gross margins being hit by 1% next year due to supply chain woes, before improving to historical levels soon after. I anticipate SG&A expenses increasing, but at a slower rate than revenues, within a 5-year period as ATZAF looks to capture market share. I hold other key ratios close to equal as a percentage of revenue from 2021 figures, as there are not many material differences in 2018 and 2019 inputs. A $63 share price can be supported with fundamentals. 2023 forward earnings of $1.58/share can also support $60 CAD with a 37 P/E multiple, which is high but in line with other analysts.

ATZAF is primed to continue its growth story as the darling of retail apparel. Their succession plan is solid and their proven growth makes this company look like the next Lululemon to explode in the U.S. The model supports about $63 CAD, but I take a $3 price cut for historical lack of support for the apparel industry by institutional investors, a tough environment for high multiples, and a lack of U.S. stock listing.

7 Hot Stocks to Buy on Any Dips in May
Stocks making the biggest moves premarket: Wendy’s, Krispy Kreme, Perrigo and more
Twitter Stock Has Risks After Deal With Elon Musk
Should You Buy Biotech ETFs Now?
The Top 10 Stocks Helping Warren Buffett Beat the Market