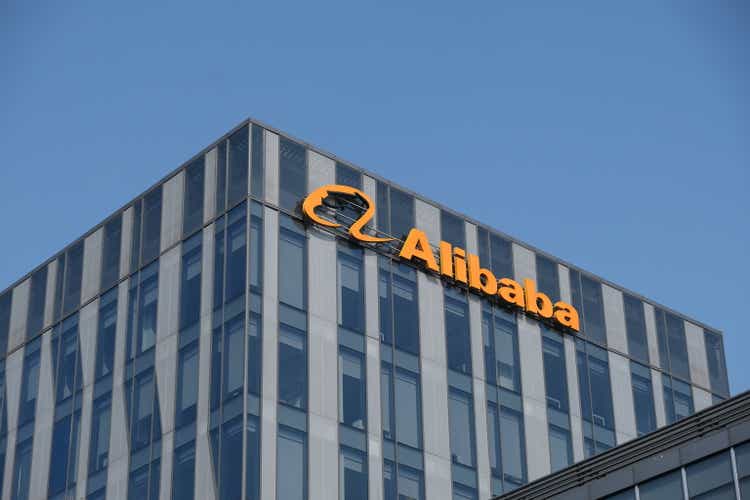 Alibaba Group Holding Limited (NYSE:BABA) is slated to report its FQ4’22 and FY22 earnings cards on May 26th. Its earnings release announcement also “coincided” with a Bloomberg report that the Shanghai state authorities could be moving ahead to easing its strict lockdowns from May 20.

Therefore, we believe the near-term catalysts are in play for management as the consensus estimates for Alibaba’s FY22-23 have been revised downwards since our previous article. Consequently, we think it sets Alibaba up nicely to deliver a better than expected guidance for FY23, putting the worst of the regulatory adjustments and the COVID lockdowns behind it.

As China’s bellwether stock, given its significant exposure to China’s consumer discretionary spending, the market would parse Alibaba’s guidance very carefully. However, we believe the market has also baked in a substantial level of negative sentiments into BABA stock.

Our price action analysis also suggests that BABA stock had already bottomed in March/April. It also corroborates our view that the bottoming process has begun to form.

Therefore, we are increasingly optimistic that the tide has decisively swung for BABA as the COVID lockdowns ease. Notwithstanding, we also understand that China’s easing has undergone significant uncertainty.

But, we need to remind investors that we don’t consider these lockdowns to have a structural impact. Furthermore, recent economic indicators also demonstrated that China’s industrial and consumer spending has plummeted, lifting the urgency of necessary policy action.

We are confident that Chinese President Xi Jinping remains committed to achieving his 5.5% GDP growth mandate. Therefore, the government would do all it can to lift/ease COVID restrictions while maintaining its zero-COVID strategy.

Given the extended lockdowns in China, the estimates for Alibaba’s FQ4’22 have been revised markedly downwards (again). The street has been reacting to the growing economic weakness in China, as industrial and consumer spending indicators have continued to disappoint. As a result, Alibaba is estimated to report revenue growth of 6.4% YoY in FQ4 before seeing a marked recovery in FQ2’23 (ending September 2022 quarter).

Bloomberg also reported that economists generally agree that “China will likely report the weakest monthly economic indicators since the pandemic started two years ago, putting pressure on the central bank to boost stimulus to support growth.” Furthermore, economists expect China’s jobless rate to surge to 6% in April, just below its two-year high of 6.2% reached in February 2020.

More negative commentary from Bloomberg Economics also validated our thesis that the market has been pricing in a “horrific” April report. It accentuated (edited):

China’s April activity data will probably make for a worrying read — driving home the extent of the damage to the economy from lockdowns in Shanghai and other parts of the country. Leading and high-frequency data are sounding alarms. Production and investment likely decelerated sharply and retail sales probably sank further. – Bloomberg Economics

In addition, Alibaba’s annualized estimates also suggest that the company’s revenue and profitability could reach a nadir in FY23 before reflecting. Notably, Alibaba’s solid profitability has helped it sustain robust FCF margins, despite being hampered by highly significant regulatory and economic headwinds. As a result, we believe it has been the most trying period for its business over the last ten years. Yet, Alibaba has proved the resilience of its business model, stress testing it to the limit.

Therefore, we believe that Alibaba’s FY23 estimates are highly credible, given the significant pessimism seen in the markets. Accordingly, investors can expect Alibaba’s revenue growth to bottom out in FY23 at 13% YoY. Notably, it’s expected to regain operating leverage, with GAAP EPS growth of 19.2% in FY23.

Upon closer inspection of BABA stock price action, we are increasingly confident that it has already bottomed in March/April, as seen above. Furthermore, its bull trap in late 2020 has been significantly digested by the distribution move and capitulation move over the past 18 months. Notably, it also formed a bear trap that has maintained its lows despite the recent lower lows observed in the US equity markets. Therefore, we are even more confident that BABA stock has likely bottomed.

Furthermore, our analysis of China’s CSI300 benchmark index also demonstrated similar digestion of its bull trap through its capitulation move seen above. As a result, it also seems to have bottomed in March/April.

Notwithstanding, there’s a slight risk that it could fall by another 7% to create a double-bottom bear trap before reversing eventually. However, we think the risk/reward profile has improved significantly despite the potential downside risk. Consequently, it seems increasingly likely that the bear market in China stocks is in its late stages.

Is BABA Stock A Buy, Sell, Or Hold?

BABA stock is a Strong Buy. As seen above, Alibaba’s underlying fundamentals and its price analysis have corroborated our thesis that its bottom had already formed.

Furthermore, its attractive valuation lends further credence to our thesis. BABA stock last traded at an NTM FCF yield of 8.1% and an NTM normalized P/E of 12.05x. We think such a bargain is a generational opportunity to own a highly profitable business with solid management and a highly defensible moat.

We upgrade our rating on BABA stock from Buy to Strong Buy. We believe its FQ4 earnings release on May 26 could be a massive near-term catalyst for its stock to re-rate moving forward.

Group 1 Automotive: Strong Performance Is Being Ignored
Athira Pharma: The Market Is Missing A Potential New Alzheimer’s Drug
7 Auto Stocks to Buy and Hold Forever
Crispr Therapeutics: Use The Rally To Cut
Old Dominion: An Old But Powerful Contender In The Trucking Industry