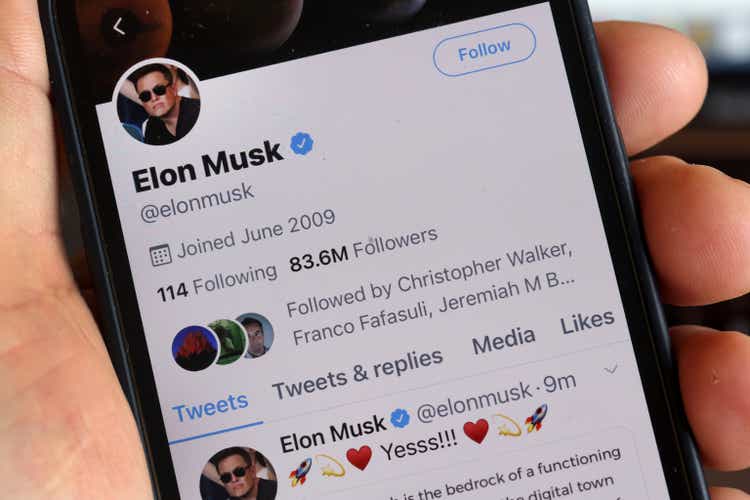 In no huge surprise, Twitter (NYSE:TWTR) has fallen materially since Elon Musk started making noise of not closing the deal for a price of $54.20. The stock has fallen from trading above $50 on multiple days back to levels before Musk disclosed his position in the social media company. My investment thesis remains ultra Bullish on the stock, especially below $40, with Musk highlighting the business weakness and forcing a restructuring of the management team.

Over the weekend, Elon Musk made it clear that questioned bot or spam accounts could prevent him from closing the deal at the current price. Despite his lack of due diligence and knowledge of a bot problem on Twitter, the richest man in the world now questions the level of bot accounts.

Musk has no basis to make such claims and Twitter has already documented the level of bot accounts as less than 5%. The company remains adamant at forcing Elon Musk to close the deal for the agreed to price of $54.20 by providing the proxy statement for the deal. If Musk would refuse to close the deal, the other option for Twitter is to sue Musk or possibly collect a $1 billion breakup fee.

My previous research has already highlighted how the recent user and revenue growth (topping 15% in Q1’22) provide a path to a much higher stock price. The Twitter management team should be able to build upon the plans of Elon Musk to boost revenues above $26 billion in 2028 and reach 931 million mDAUs by 2028.

The Musk plans are probably ambitious, but the 931 million user total by 2028 isn’t far off the Twitter plan for growing users at a 20% clip to reach 315 million in 2023. The social media site would achieve the following mDAUs with 20% annual growth:

Sure, the company only gets to 784 million mDAUs by 2028 under a scenario of 20% annualized growth, but the stock market would love a company with 20% user growth and the potential to vastly expand the business model. Twitter was already working on growing performance ads to 50% of the advertising revenues and building a subscription business.

A big part of growing the business is aggressively expanding the Twitter Blue subscription service. The social media company can do a lot more by raising subscriptions via utility fees from verifying human users and charging for the ability to DM users. These measures either increase the revenues of Twitter or increase the quality of the service with Twitter Blue subs able to focus interaction with verifiable human users, or those willing to pay for such interactions potentially reducing the willingness to spam other users.

In just the last week, new Twitter CEO Parag has apparently forced at least 5 executives to leave the company. The headlining departures were Periscope Founder Kayvon Beykpour and Revenue Head Bruce Falk. According to Kayvon, his departure was not voluntary and came while he was out on paternity leave.

A review of these executives departing the company highlights one of the major problems with Twitter. The last 3 executives listed by Bloomberg as departing weren’t active on the site.

Max Schmeiser, Head of Data Science, only has 81 tweets since joining Twitter in May 2011.

Katrina Lane, VP of Twitter Service, isn’t even visible on the site.

Twitter has a history of top executives not even being active on the platform questioning if maybe some of the product development struggles is related to not even understanding the social media site. The richest man in the world attempting to acquire Twitter has more tweets than these 3 executives combined. One has to question whether Twitter executives actually believe in the product they spend all day trying to improve.

The big question is whether the new CEO is just making changes to the business model or whether Parag is firing employees not on board with the free speech parameters desired by Elon Musk. The later would be a welcome outcome for Twitter shareholders under a scenario where Elon Musk doesn’t take over the company.

The stock has upside of 40% based on actually closing the deal at $54.20 using the current offer price of Musk. With a deal cancelled, a reinvigorated Twitter could see a far higher stock valuation based on the ability of the service to generate substantial revenue and user growth by expanding the business model to performance ads and subscriptions on one targeted at generating nearly $6 billion in revenues from just branded ads.

The stock only trades at reduced 2023 revenue targets of $7.25 billion. Twitter didn’t need Musk to achieve these goals and higher users from free speech policies and a strong focus on expanding the revenue model could help the company achieve even faster growth.