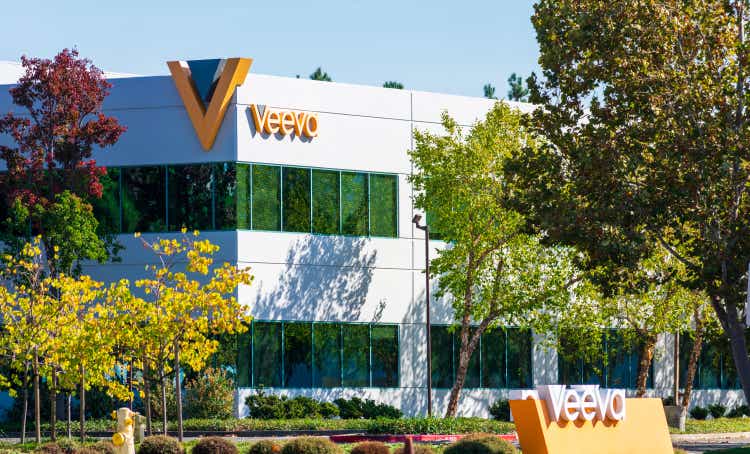 Veeva (NYSE:VEEV) is one of the higher quality SaaS companies available, with a unique combination of advantages that make it difficult to replace in a tech-focused portfolio. Veeva’s valuation has been significantly rerated lately, so now is a good time to buy shares after a solid earnings report.

Normally, I’m an advocate of the “buy what you know” strategy. I don’t know much about healthcare and I’ve never used Veeva’s software, so normally that would mean I wouldn’t want to own it. However, I do know SaaS, and when it comes to SaaS companies, Veeva looks like a great company from multiple angles.

The first angle is market share. Although Veeva has multiple products, one of its largest is customer relationship management software, similar to what Salesforce (CRM) and HubSpot (HUBS) offer. Veeva estimates that it has 80% market share of CRM in its target market of life science companies. 81% of new drugs approved were launched with Veeva CRM, which is an incredible number that in my view represents a virtual monopoly.

Because healthcare is a complex and highly regulated industry, its needs – especially as it relates to regulatory compliance – are different from generic CRM. Thanks to the data and experience obtained from Veeva’s market leadership and first mover advantage, no company has a better understanding of those needs than they do. This gives Veeva a wide moat, which is reinforced by Salesforce – the overall industry leader – having a standing 15-year partnership with Veeva that essentially amounts to a noncompete agreement.

While dominant market share is often a mixed bag because it can limit opportunities for future growth, that probably won’t be the case with Veeva. As shown above, Veeva has a relatively small share of the overall life sciences software market, which includes more than just CRM. This gives the company plenty of room to expand into more offerings.

That brings us to the second favorable angle, which is diversification of revenue. Although life sciences seems like a small and concentrated market, Veeva has over 1,000 customers and their top 10 customers accounted for a reasonable 31% of revenue. Veeva has already expanded meaningfully beyond CRM and offers over a dozen products through its commercial cloud, vault, and consulting segments, most of which are intended to help life sciences companies bring drugs to market in a safe and compliant way. According to Morningstar, the average Veeva customer subscribes to 2.5-4 products. So, investors don’t have to worry too much about Veeva being impacted by a slowdown in one product or customer.

The third favorable angle is the Rule of 40. This measure of a SaaS company’s ability to balance growth and profitability – i.e. its quality – puts Veeva in the top 15% of all SaaS companies I cover. They currently score 48 even as they experience some of their slowest growth ever. The other stocks that score over 40 are mostly newer companies that don’t do as well when it comes to diversification of revenue and dominant market share. The ones that do – like Microsoft (MSFT), Adobe (ADBE), Synopsys (SNPS), and VeriSign (VRSN) – are all mature companies that probably don’t have as much growth potential as Veeva and/or don’t sell to industries that are as defensive as healthcare.

Considering all of these points – in addition to other bonuses like Veeva being founder led and my portfolio being underexposed to healthcare – I found it difficult to pass on this company even though I’ve never used their software or known anyone who did.

Veeva recently released Q1 earnings, which were strong enough for shares to rebound slightly, but they’re still 47% off their highs. The earnings revealed a 2% revenue beat, 7% EPS beat, and slightly raised guidance, which are all respectable but not earth-shattering. It’s about what I’d expect from a steady performer like Veeva.

The fact that shares were up double digits the day after these results could indicate that investors got too pessimistic about Veeva, as the company continues to perform steadily without any major negative developments in its story.

One point that I found particularly encouraging is that Veeva is continuing to hire aggressively, meaning that they’re not expecting demand to weaken despite the difficult macro environment. Perhaps that’s an advantage of selling to the defensive healthcare sector.

Veeva is currently guiding for 18% revenue growth and a very respectable 38% non-GAAP operating margin in 2022. While I prefer to see GAAP guidance, Veeva’s current GAAP operating margin above 25% means that I’m not too worried about this company being highly profitable.

As with many high quality blue chip type companies, Veeva does well on most of Seeking Alpha’s factor grades but gets a lower score for growth and valuation. Of course, with a monopoly in one of its major products, Veeva’s growth will be slower than some peers’. But double digit growth is still meaningfully above the market average and enough to generate alpha considering that it comes alongside strong pricing power and A+ profitability.

The biggest risk with Veeva – and the biggest sticking point for many investors – is valuation.

Fortunately, as shown in the chart above, Veeva’s P/S has come down significantly after nearly reaching 40 in 2020. At nearly 16 P/S today, it’s easy to see why Veeva gets an F for valuation, but this is about the average P/S ratio for Veeva since it went public in 2013.

Unfortunately, the other aspect to consider is slowing growth. As the dotted blue line shows, Veeva’s revenue growth has slowed from nearly 60% after its IPO to just 17% today. Growth should be considered heavily in a valuation model, so substantially slower growth means that a lower P/S multiple is warranted.

Thanks to strong profitability, Veeva has a PEG ratio a bit above 2 even with its high P/S multiple and slowing growth. This is still high, but it’s about average among high quality healthcare stocks in today’s market.

Currently, I have a $191 price target on Veeva because I believe that would be a fair value that would allow shares to double in the coming decade. This is based on relatively conservative assumptions of 16% revenue CAGR in the coming decade, terminal profit margins of 28%, a terminal P/E of 25, and no dividends or buybacks. My price target is more conservative than the average analyst target of $224 and Morningstar’s target of $275. This is likely because I don’t account for a reduction in shares outstanding, mostly because I haven’t seen evidence of it yet; Veeva is certainly profitable enough to start returning some cash to shareholders through buybacks and that could lead to further upside.

Although Veeva currently trades near my price target, I still think it’s a buy today for investors looking for a stock with Veeva’s unique attributes. The healthcare sector is likely to hold up better than most during difficult economic times, and Veeva is a high quality company with no major questions surrounding its leadership, moat, market position, or growth potential. You’re probably not going to see stellar returns from Veeva, but from the current price I don’t expect major downside risk either. Although Veeva is still a young company, I already view it as a blue chip, and most investors should make space in their portfolios for high quality stocks like Veeva.

Cenovus: Buy The Dip
6 Dividend Income Stocks With Better Yields Than the S&P 500
Stocks making the biggest moves after hours: FedEx, Sarepta Therapeutics and more
Gamestop Won’t Make You Rich Here, But It Could Break You
3 Stocks to Buy and Hold for 2 Years