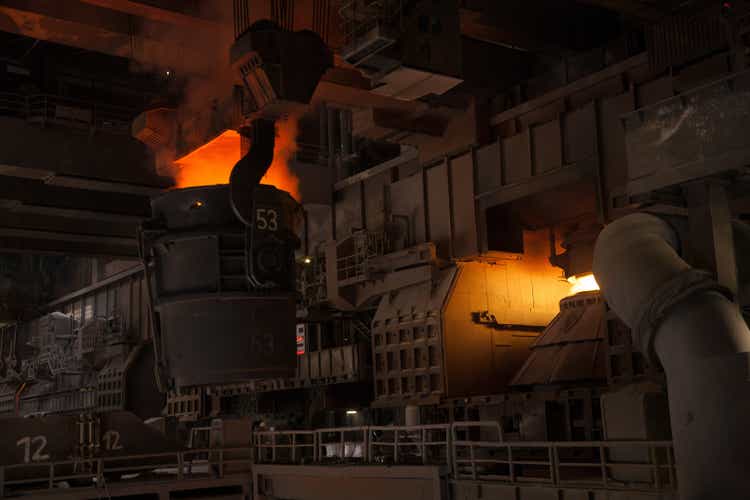 I have been keeping an eye on Algoma Steel (NASDAQ:ASTL) ever since it announced it plans to go public through a SPAC. While most SPAC deals are failures and despite the current share price trading below the $10 SPAC and capital raise price, I remain bullish on Algoma Steel, which is now trading at less than 1X its EBITDA. The Q4 results were excellent, the cash is pouring in and Algoma announced a C$400M share buyback plan while confirming its Q1 2023 EBITDA will remain stable compared to the most recent quarterly EBITDA. For a better overview and background information on Algoma Steel, I’d recommend reading my two previous articles here and here.

The Q4 Result Was Absolutely Excellent

The fourth quarter was excellent for Algoma Steel as the company reported a C$942M revenue, resulting in an EBITDA of C$334M for an adjusted EBITDA margin of just over 35%. Of course, steel has always been and will remain a very cyclical business, but I’ll be the first person to admit the cycle is lasting longer than I had expected. The average received price per tonne of steel sold was C$1721/t which compares favorably to the average prices earlier in the year as the average steel price received throughout FY 2022 (which ended in March) was ‘just’ C$1657/t. Divided by the average exchange rate through the year, the USD-equivalent of the received steel price was approximately US$1320/t.

For simplicity’s sake, let’s just use the company’s full-year results (we’ll have to use a lower steel price in our assumptions for the future anyway).

Of course, there were a bunch of non-recurring expenses related to the going-public transaction, but despite the ‘special’ year, Algoma Steel reported a net income of C$858M or C$8.53 per share. I would like to warn for the EPS used by the company, as that’s based on the average share count of Algoma Steel during the year. As of the end of the financial year, the share count had increased to 148M shares as the transaction was completed and earnout bonuses were paid (in stock). So if we would divide the net income by the current share count, the EPS would have been C$5.80 (or approximately US$4.40 per share).

The most interesting feature of Algoma Steel is its cash flow profile. After all, it will need the cash to fund its massive buyback program (see later). In FY 2022, the company generated C$1.288B in operating cash flow, but this includes a C$102M deferred tax charge and excludes the C$36M in interest payments. So on an adjusted basis, the operating cash flow was approximately C$1.14B.

The total capex was just C$166M (which is almost twice as high as the depreciation and amortization expenses, so Algoma clearly isn’t cutting any corners here) which results in an underlying normalized free cash flow result of C$980M. Divided over the current share count of 148 million shares, the free cash flow result in FY 2022 was C$6.62/share, or roughly US$5.

This obviously helped to get the balance sheet in what likely is the best shape it has ever been in. As of the end of March, Algoma Steel had C$95M in gross debt (owed to the government) while its balance sheet contained C$915M in cash. The math is pretty easy, and Algoma Steel ended its financial year with about C$820M in net cash on the balance sheet. That’s approximately C$5.55/share in net cash or US$4.25. Indeed, right before the earnings announcement, about half of the market cap consisted of net cash and Algoma Steel was trading at an EV/EBITDA of 0.5. I don’t think I have ever seen a multiple as low as Algoma’s. In all fairness, I excluded other liabilities like the pension deficit. But I also excluded all other current assets. In fact, the current assets on the Algoma balance sheet are almost twice as high as the total liabilities on the balance sheet.

As the steelmaking business is a very cyclical business, Algoma Steel will likely always remain cheap. But the question is how cheap is too cheap? I think that point has now clearly been reached.

Sure, the steel prices are dropping, and the futures are pointing in the direction of US$900-1000/t which would be around C$1300/t at the current exchange rate. So yes, Algoma Steel will likely see its performance deteriorate in the next few quarters. But before that will happen, the company will likely publish one final blow-out quarter as it is guiding for an EBITDA result of C$335-355M which is pretty much in line with the Q4 result. Given the lack of interest expenses and the low depreciation expenses, we can reasonably expect the company to generate C$225-250M in free cash flow in the current quarter. This will boost the net cash position to C$1.1B.

As the future looks great, Algoma Steel is now finally signalling it plans to reward its shareholders. Sure, the company already initiated a US$0.05 quarterly dividend, but that dividend is only costing the company less than C$40M per year, so that was merely a symbolic move.

When Algoma announced its full-year results, the company also announced a US$400M Dutch auction. The exact details of this share buyback program will be shared in the next few days but if I would assume an upper price range of US$12, the company could easily buy back over 30M shares to reduce the share count by 20% right away.

The main risk associated with this tender auction is the low take-up rate. Stelco Holdings (OTCPK:STZHF) for instance also organized a Dutch auction earlier this year, but was only able to spend about 2/3rd of the amount it had earmarked for the buyback. So if for instance only 10 million shares are tendered into the Dutch auction, Algoma will only be able to repurchase 10 million shares. This creates a little bit of a catch-22: for shareholders it is both advantageous to see a generous tender range as they can immediately book a big capital gain. However, it will also be more advantageous in the long run if the company can buy back a lot of stock at a lower price.

The details of the Dutch auction will be announced in the next few days, and we’ll get more clarity then. The main takeaway here is that Algoma Steel now appears to be more shareholder-friendly. We’ll see how many shares the company will actually be able to buy back, and we’ll likely also get more clarity on the steel prices in the remainder of this year.

But one thing is now quite certain. Thanks to the high steel price in the current quarter, Algoma Steel will likely still end up with a net cash position of in excess of C$500M even if it is able to spend the entire US$400M on buying back stock. The outlook for the next few quarters looks a bit worse and based on the futures market, it looks like the operating margin may be slashed by 30-50%. The company will still remain profitable and cash flowing, but the futures market seems to indicate the excellent times are over, and we are now entering the period of ‘good’ times. At US$1,000 steel, I anticipate Algoma still being able to generate about C$400M in net income.

I remain long despite seeing the steel price futures getting weaker. Algoma Steel has played the recent cyclical upturn perfectly and is fully armed to survive the downcycle and to build the electric arc furnace (thanks to the support of the Canadian government providing up to C$420M in funding for the C$700M project).

I have a long position in Algoma Steel, but I may tender shares into the Dutch Auction if the price is right. Meanwhile, I may be looking to add to my position.

Why Snap Investors Ought to be Skeptical
Huntington Ingalls: Diversity Continues
How Safe Is Venmo and What Are Its Fees?
FuboTV’s Latest Hires Point to Future Growth
Stocks making the biggest moves midday: Nike, La-Z-Boy, Altria Group, Coinbase, Dow & more