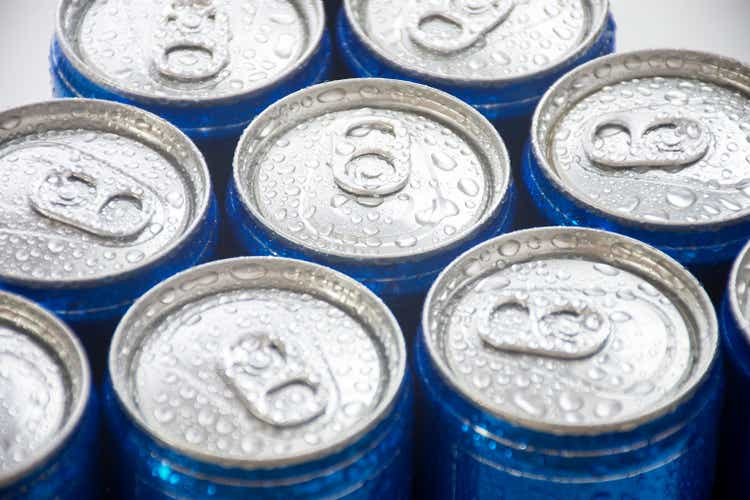 The beverage can industry has been performing exceptionally bad in the past three months, and Crown Holdings (NYSE:CCK) is no exception. After peaking at just over $130/share at the end of the first quarter, the share price has lost almost 30% and is now trading in the mid-nineties. I remain bullish on the entire sector as the demand is likely here to stay and, in this article, I will explain my thesis.

It’s All About The Cash Flow

First of all, I wanted to dig deeper in how Crown Holdings was actually performing before diving into the sector issues. The company’s total revenue in the first quarter of this year increased from less than $2.6B to in excess of $3.1B. This was partly caused by higher volumes but also by higher prices as the standard in the sector is that the can producers can immediately pass through certain higher operating expenses such as a higher aluminum price to the customers.

This also means Crown’s margins didn’t necessarily increase, as the COGS obviously also increased. Fortunately, pretty much every single other operating expense remained stable (or increased by a more moderate percentage) and this has helped Crown to show a 5.5% increase in the operating income, which increased to $344M. That’s perhaps slightly disappointing considering the 20% revenue, and yes, it’s a clear sign of margin deterioration, but at least Crown was able to prevent its operating income (and net income) from decreasing. The net interest expenses also decreased from $67M to $51M and this helped to boost the pre-tax income to $307M and after all the dust has settled the net income attributable to the shareholders of Crown Holdings was $216M for an EPS of $1.75. Keep in mind, the EPS is based on the average share count throughout the quarter. Based on the reverse calculation, the average share count was approximately 123.4M shares, but we also know, from the SEC filings, Crown had just 122.9M shares outstanding as of April 28 as the company spent quite a bit of cash on buying back its own shares. If these share repurchases continue, Crown’s EPS could increase substantially without generating a single dollar in additional net income. And keep in mind, Crown reiterated its full-year guidance to generate $8-8.20 in full-year net income.

As explained in my previous article, investors in this industry should focus on the free cash flow. More importantly, the sustaining free cash flow is what really matters as Crown is spending more money on expanding its current operations. Crown Holdings plans to spend $1.1B on capital expenditures this year and expects this will result in a free cash flow of $400M. That sounds disappointing, but as its peers spend on average 2.5% of the revenue on sustaining capital expenditures, I think running the numbers using just the maintenance capex makes more sense here.

Knowing the average sustaining capex used by its peers (Ardagh Metal Packaging (AMBP) and Ball (BALL), the two other beverage can producers that make up the top-3 in the world), we can figure out Crown’s underlying sustaining free cash flow.

We also see the total capex was just $117M. That’s very low considering the company is guiding for a full-year capex program of $1.1B, and this obviously means Crown will really ramp up its capital expenditures in the next few quarters. The $117M capex bill is already higher than the depreciation and amortization charges, but looking at the revenue in Q1, we should assume about $75-80M of the capital expenditures were sustaining capex.

Beverage Can Makers Have Been Under Severe Pressure Lately

The free cash flow result is great, the earnings are fine and the earnings guidance is excellent. So why is Crown’s share price sliding, then?

I think there are two reasons. First of all, although the companies can directly pass through certain higher input expenses like the aluminum price, there usually is no such clause for energy-related expenses. This means Crown will likely see its margins get worse in Q2 before it will be able to renegotiate and renew contracts, taking the higher energy costs into account. So I would agree higher energy expenses will be a (hopefully temporary) setback.

The sector also was rattled by a recent report from Wells Fargo turning negative on the sector as a whole. I’m not so sure about this point of view, as the new capacity Crown (and its peers) are investing in tends to be fully booked in the first few years. The beverage can producers are actually building new plants based on the demand and not the other way around (building a new plant and hoping the demand will follow). Although this report rattled the sector, it’s important to know that despite the bearish view, Wells Fargo established at $110 price target for Crown.

I’m not worried about the beverage can industry. The Wells Fargo analyst may have a point about slowing growth, but that’s fine, as I’m not assuming any additional growth beyond 2024 in any of my models and assumptions. The plants under construction (or heading to the construction phase) are providing additional capacity that usually already is spoken for. I expect Crown’s full-year EPS to come in below the $8 guidance on inflationary concerns, but I still expect the sustaining free cash flow per share to come in at around $9/share, making the current share price of less than $94 quite attractive.

I remain bullish on the entire sector and have recently been adding to my positions in all three beverage can producers. Crown will generate in excess of $2B in EBITDA this year, which also means the current net debt level of just over $5B is easy enough to handle.