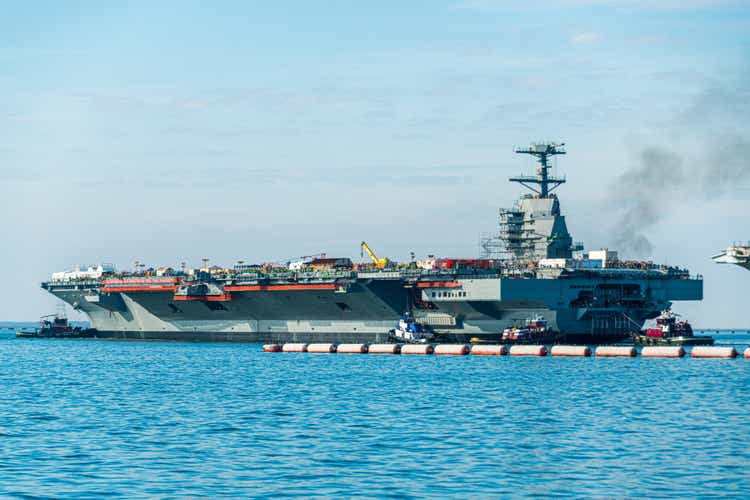 I have written nine previous Seeking Alpha articles about Huntington Ingalls Industries (NYSE:HII) and remain positive on the company. HII is the nation’s largest military shipbuilder. Building nuclear aircraft carriers and nuclear submarines is a complex and long-term program. As such the financial statements may be somewhat “lumpy”, that is, the finances do not always result in smooth, rapid growth that may be evident like in a fast growth software company. But HII is a premier national defense business.

The one-year stock does have its ups and downs.

HII will not be a 5 or 10 bagger, however, it can be classified as a great, steady value stock. The current forward P/E is 14. The dividend yield is 2.25%. The 5-year dividend CAGR is a fine 16.98%. There are a number of key reasons to consider HII if one is a value investor. HII is a business and a stock focused on the long term. It’s a value stock. Management expected a 3% revenue growth – “thus steady as she goes.” This article will look at a portion of the environment going forward. We’ll summarize and drill down on key attributes.

Management has a strategy of broadening the company through organic businesses and acquisitions that are not directly tied to large shipbuilding for the US Navy and Coast Guard. As such HII is setting in place a government business extending beyond shipbuilding.

The backlog of $48.5 Billion is the busiest the shipyards have been since it was spun out of Northrop Grumman (NOC) in 2011.

HII distributed 64% of FCF to shareholders in 2021 and dividends have been increasing since the formation of HII.

2021 return to shareholders was a combination of buybacks and dividends.

At first glance a budget increase to a proposed $773 billion in 2023 looks like an increase of 4%. But inflation is running greater than 4% so it is really a decrease in real dollars.

Nine battle force ships are requested for 2023 by the Navy at $27.9 billion. The ships include:

And very importantly the 2023 budget continues to include funding for the Columbia-class ballistic-missile submarine. While the lead is GD Electric Boat, HII has major portions, about 23% of the boat. The FY23 budget includes $6.3 billion. The long-term program is projected at $110 billion.

Regarding the Flight II San Antonio-class amphibious transport dock ship – LPD-32, this may be the last one. The program originally planned to build through LPD-42.

While in the US Coast Guard budget, not DoD, the USCG National Security Cutter program ship built by HII is coming to an end

While these are the administrations’ budget, Congress gets the deciding vote. We have many months until the budget is authorized and actual monies appropriated. This is the first step. Congress is in the lead from here, so it is not yet final. What this means to me is that the traditional shipbuilding by HII will continue. And there are new Navy ship designs on the horizon. There are new submarine and destroyer designs being developed but they are years away from cutting steel. An example is the Light Amphibious Warship projected to be initially procured in 2025.

According to an article in the May 5 Wall Street Journal the Navy plans to retire 24 ships beginning in 2023 and new procurement only makes up for a portion of the retirements. Our Navy will then have 285 – 300 ships.

Numbers don’t tell the entire story but China will have 450 ships in 2030.

Unmanned and lightly manned vessels will grow but they don’t have the financial payoff to a company like HII as those ships listed above. Further research and future procurement of unmanned vessels is planned by the Navy, which is a domain in which HII has developed expertise.

So, this all makes the strategic business case to diversify, which is what HII is doing.

With the recent acquisitions (e.g. Alion), HII is promulgating new messaging – from their website: “HII is a global engineering and defense technologies provider. With a 135-year history of trusted partnerships in advancing U.S. national security, HII delivers critical capabilities ranging from the most powerful and survivable naval ships ever built, to unmanned system, ISR and AI/ML analytics, HII leads industry in mission-driven solutions that support and enable a networked, all-domain force. Headquartered in Virginia, HII’s skilled workforce is 44,000 strong”

The Technical Solutions sector has been renamed Mission Technologies and consists of six business groups:

HII has capabilities in unmanned surface and underwater systems with the size ranging from small to large systems. Customers include the US Navy and international customers. International is about 30% of the unmanned business.

According to a GAO April 2022 report on Unmanned Maritime Systems”, the Navy plans to invest $4.3 billion on unmanned systems over the next 5 years. This includes 21 uncrewed vessels. This estimate includes Navy research and management effort, so it does not all go to a contractor.

In December 2020, the Navy released a 30-year ship building plan.

Unmanned is only 4% ($1.2 billion per year) of the 30-year shipbuilding budget. And keep in mind that the Federal DOD budget often contains less money for shipbuilding than the Navy wishes.

So, while unmanned is important the yearly budget is less than a large battle force ship such as a DDG destroyer. But unmanned is just one of six businesses in the Mission Technologies business area. At the June 2, Bernstein Strategic Business conference HII President and CEO Chris Kastner remarked the unmanned is currently not providing much revenue, but he expects it will soon.

ADM Michael Gilday, Chief of Naval Operations, speaking April 28 in a Maritime Security Dialogue event on the future of the U.S. Navy talked about unmanned experimentation that may yield integration into the fleet regarding timing and size of unmanned underwater vessels.

And unmanned extends HII’s foreign business. During the May 5, 2022 Q1 conference call, as noted above, it was stated that 30% of their unmanned business was to foreign NATO countries.

A typical mid-life refueling and repair is a $4 Billion and a four-year program.

The FY23 proposed DoD budget, does not create a harmful impact to HII. It continues a stable shipbuilding program.

New nuclear submarines, DDG destroyers and continuing nuclear carrier construction are in the cards for the near term that will have a positive impact on HII. The Ingalls shipbuilding facility has a high loading but eventually the end of USCG National Security Cutter (constructing the 11th) and the Navy Amphibious Transport Dock ships will occur in a few years. Future Navy designs are underway which Ingalls can compete for when needed. The Navy is developing new designs for submarines, surface combatants and a Marine Light Amphibious Warship (projected FY25 procurement) that may result in new procurements in this decade.

With excellent execution of these shipbuilding programs and growing the Mission Technologies business unit HII will continue to provide financial rewards to shareholders. (I emphasize the “excellent execution” is a must).

HII’s backlog and diversification provides the foundation for a positive path forward.

This will result in free cash flow and dividend growth. And will reward shareholders.