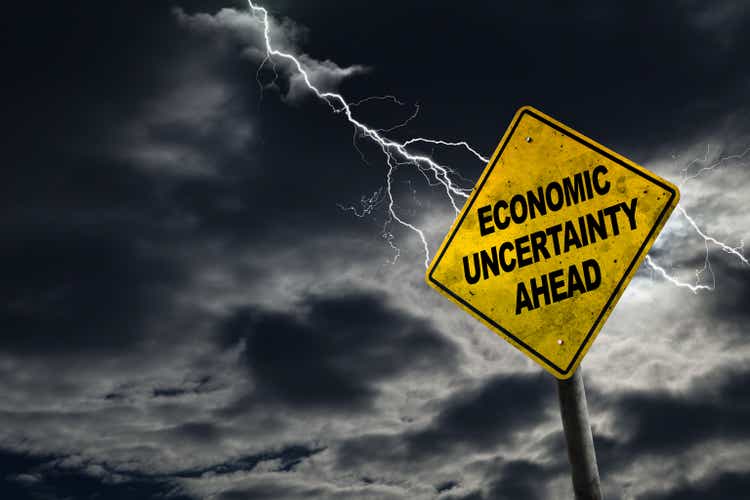 Back in early July, I made a bullish call on Advanced Micro Devices (NASDAQ:AMD) stock, citing strong business fundamentals, depressed valuation, and technical support in the low $70s. After a quick bounce to the $105 level by mid-August, AMD’s stock has been retreating faster than the fade-off in the summer rally seen in broader equity markets. And last week, AMD’s stock broke its key support level in the low $70s amid a broad rout in semiconductor stocks.

In fairness, AMD sliding through such a key support level like a hot knife through butter is worrisome and demands deliberation. But before we delve into the primary drivers of this bearish price action seen in AMD, I would like to share an excerpt from my previous note on the company:

In a matter of months, AMD’s stock has tanked by 55%, going from overbought territory to near-oversold territory on the weekly chart. Right now, AMD is sitting at a strong support zone (marked by a black horizontal line on the chart below), which also happens to intersect with AMD’s long-term bullish trend line (market by the green line on the chart below) and the 200DMA.

In recent weeks, the volume has been trending lower, which could be a sign of seller exhaustion. Considering the support zone and price-volume action, I think AMD is a good long-term buy here. The fundamental and quantitative data support a long position too. However, a break of this support at the ~$70 level could send the stock into a tailspin (down to the $40-$60 range marked by red dotted lines on the chart). I don’t think these levels will materialize, but the market could do crazy things when fear levels are elevated amid talk of an impending recession (heck, we might already be in one, I believe this to be the case). I guess the eventual bottom will depend on how deep the recession turns out to be; however, I don’t know where the bottom is, and I’m not going to try to find it.

Source: As AMD Stock Dips, Is It A Buy, Sell, Or Hold?

As per my reading of AMD’s technical charts, the stock is headed to the $40-60 range in the upcoming months. Unless we get some positive catalyst that lifts AMD back above $70 in quick order, this ominous forecast is very likely to materialize. That said, in my mind, AMD’s robust business fundamentals and depressed valuations render it a strong buy at current levels. For brevity, I will only discuss AMD’s valuations in this report, but more on that later. Please feel free to refer to the note linked above to learn more about my thoughts on AMD’s business fundamentals.

For now, let’s focus on understanding what’s happening with AMD and foreseeing what the potential path for AMD’s stock down to $50 per share ($80B in market cap) would look like.

As we discussed in my previous note, AMD’s business fundamentals are robust. On top of delivering best-in-class growth among its peers, AMD is showing margin profile improvements and winning market share. In recent weeks, analysts have been cutting forecasts for AMD’s H2 2022 and 2023, citing factors such as demand weakness in PC markets, the US government’s ban on the export of AMD’s MI250 GPUs to China, etc.

While these factors do support AMD’s price action to some extent, the single biggest driver for such a rapid decline in AMD’s stock is the FED. A tighter monetary policy is raising fears of recession, which in turn is impacting demand (even to the extent of causing a supply glut for some GPUs). Over the last few months, AMD’s stock was declining due to rising interest rates causing a valuation moderation. Today, AMD trades at a very reasonable forward P/E of ~15-16x, but now, market participants seem to be pricing in a drop-off in earnings from the impending economic recession. The semiconductor industry is notoriously cyclical, and all the talk of a secular demand environment for semiconductors is evaporating rapidly.

So far, AMD’s results have lived up to investor expectations, and Dr. Lisa Su (AMD’s CEO) reiterated H2 2022 guidance during the Q2 earnings call. Generally, I think we can take Lisa’s word and expect even more from AMD; however, the demand environment is shifting rapidly, and we may be in for a negative surprise in Q3.

Historically, AMD’s earnings have been tremendously volatile during down cycles, and while today’s AMD is a well-diversified, well-capitalized business, we may still see significant volatility in earnings during a recession. For AMD’s stock to slide down to ~$50 per share, all we would need is a 25-30% drop in earnings (from 2022E levels of ~$4.35) with a 2023 P/E multiple of ~15x.

With all of this being said, I think AMD’s stock is already priced for a recession, and investors buying here have a significant margin of safety.

As you can see, AMD is growing faster than its peers, and its margin profile is improving considerably as the revenue mix shifts towards the data center market. Based on a mix of future growth, margins, and forward Price-to-Earnings ratio, AMD is far more attractive compared to its rivals Intel (INTC), Qualcomm (QCOM), and Nvidia (NVDA). With a PEG ratio of <1.0, AMD is significantly undervalued on a relative basis.

To find the fair value and expected return of AMD, we will use the TQI Valuation Model with conservative assumptions.

In an economic recession, the demand for semiconductors is likely to contract; however, I think AMD can grow through a recessionary environment as it is winning market share from rivals in the PC and data center markets. Over the years, AMD has handsomely outperformed management guidance, but another way to look at this data is that AMD’s management tends to sandbag guidance. As you may know, AMD’s long-term financial model calls for CAGR growth of 20%+ with operating margins in the mid-30s. Hence, I believe that assuming a 20% growth rate for five years and a 25% optimized FCF margin implements an ample margin of safety into our model. The remaining assumptions are straightforward.

On an absolute basis, AMD is worth ~$108 per share ($170B in market cap), which means it is deeply undervalued at current levels.

After a breakdown of technical support at ~$70, AMD’s stock seems destined to head down to the $40-60 range in the near to medium term. As you may know, the semiconductor industry is very sensitive to the economic environment, and AMD is not immune from the macro. Corporate earnings may be the next shoe to drop in this ongoing bear market in equities. And I think the Q3 report will be pivotal in determining the next big move in AMD’s stock. While solid results could enable the stock to break back above the key $70 support level, a weak result or a weak guide could make the stock tumble to the $40-60 range.

Unlike in the past, AMD’s business is very well capitalized and far more diversified; hence, I think it should get through the impending downturn without much fuss. According to my analysis, AMD’s fair value is $108 per share, i.e., it is deeply undervalued at this time. With an expected CAGR of 26.85%, AMD is offering asymmetric risk/reward for long-term investors.

From a long-term investor’s perspective, AMD is a great buy right here. If you are worried about the possibility of another down leg (i.e., a deep recession), I would suggest the use of a 3-6 month DCA plan to accumulate a long position.

If you have any thoughts, questions, and/or concerns, please share them in the comments section below or DM me.