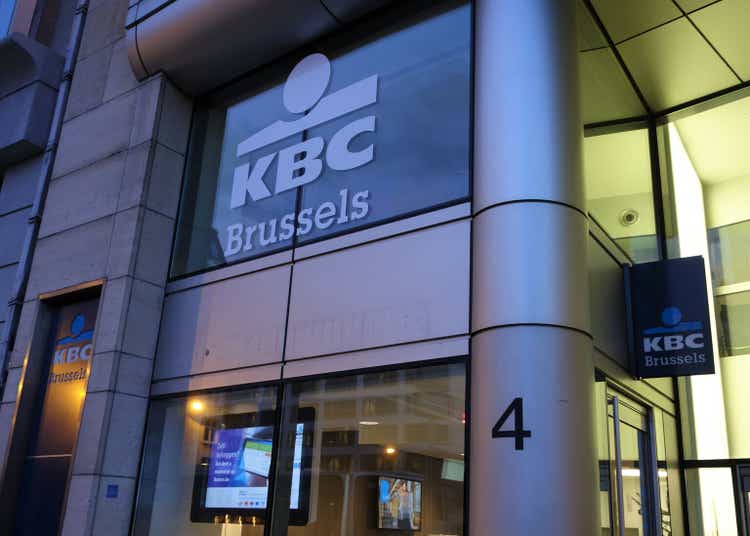 I have discussed the performance of Belgium-based KBC Group (OTCPK:KBCSY) (OTCPK:KBCSF) on Seeking Alpha before, and the bank remains one of my favorite bank/insurance companies in Europe. Not only does it have a very strong position in Belgium, the bank also was known to gain exposure to Eastern Europe with the Czech Republic as important market. This resulted in KBC trading at a relatively high multiple in the past but the recent turmoil on the European continent has brought down the share price and thus the valuation.

A strong result in the first half of the year, and capital ratios remain strong

The bank already is benefiting from an expanding net interest margin as KBC saw its net interest income increase by approximately 4% to almost 1.25B EUR compared to the 1.2B EUR in the first quarter of the year. The bank reported a total income of 2.12B EUR which is just marginally higher than the 2.12B EUR in the first quarter. The main culprit is the lower fee and commission income.

The bank barely had to record any loan loss provisions and the operating expenses normalized at around 1.1B EUR per quarter. That’s much lower than in the first quarter of this year when the total operating expenses exceeded 1.5B EUR but that is entirely related to the bank taxes owed and paid in the first quarter of every year. The majority of these taxes (354M EUR) are paid in Belgium and are still a “punishment” for the 2008 banking crisis.

This also immediately explains the sudden jump in the net income and EPS: The Q2 EPS came in at 1.92 EUR per share which is an increase of approximately 80% compared to the first quarter. But of course that’s almost entirely related to the seasonal bank tax. The total EPS in the first half of the year came in at 2.99 EUR per share, and this included approximately 50M EUR in impairment charges.

As I’ll explain later in this article, these impairment charges will increase in the second half of the year but the bank should still remain quite profitable, especially now the interest rates are increasing again.

According to the official communication of KBC Group, a 100 base point interest rate increase will have a gradual positive impact on the reported net interest income and it will take about three years for the entire impact to be noticeable.

As it’s starting to look like the interest rates are increasing at an even faster pace, the net interest income increase may be even more impressive.

The exposure to Eastern Europe has got the markets worried, but all should be fine

Although KBC is a Belgian bank and insurance company, it also has a strong presence in Eastern Europe. While this originally was a positive feature as those still are strong growth markets, the market is a bit worried about the political issues over there, and although KBC has no activities in Ukraine, Eastern European focused banking groups are under a bit more scrutiny.

And just to give you an idea of how exposed KBC is, about 55% of the loan portfolio of almost 200B EUR is related to borrowers in Belgium with a myriad of smaller Eastern European countries taking up the bulk of the rest (Ireland accounts for almost 5% and then there are a few smaller other portfolios including exposure to Asia, Western Europe and North America).

All things considered, I think the market is overly worried about the exposure to Eastern Europe considering approximately 66% of the loan book was issued to Western European borrowers.

KBC also has done an excellent job to reduce the percentage of loans that are classified as Stage 3 assets (where impairment is likely) as it has been actively managing this portfolio by selling off assets. That being said, there is an uptick in the Stage 2 category as approximately one sixth of the loan book is categorized as Stage 2. That’s not unreasonable, and a Stage 2 qualification does not mean the bank will most certainly lose money on the loans.

And why am I not too worried about the loan book? KBC has been very focused on mortgages. About 70B EUR of the loan book consists of mortgages and as you can see below, the average LTV ratio of these mortgages is pretty low.

And another reason why KBC earns my trust is the exceptionally low credit cost ratio it has experienced in the past few years. The bank really learned its lesson in 2008 and has since been focusing on balance sheet strength. The bank is guiding for an average credit cost ratio of 25-30 bps. On a 200B EUR loan book, this means the bank is expecting about 600M EUR in loan losses per year. The short-term target for this year is a credit cost ratio of 10-25 bps. And just as a reference: The average credit cost ratio from 1999 to 2021 was just 0.40% and as you know that 22-year time span includes the dotcom bubble, the global financial crisis in 2008 and several sovereign debt crises in the past decade including the crisis in Ireland where KBC was very active at the time.

While this does indicate the loan loss provisions will surely increase in the second half of the year but as I also expect the bank’s net interest margins to increase, I think the impact could be pretty benign.

And let’s also not forget the strong capital ratios of KBC. As of the end of June, KBC had a fully loaded Basel 3 CET1 ratio of 15.9%. Not only is that one of the highest ratios in Europe, it also handsomely exceeds the bank’s self-imposed 15% hurdle despite having paid a special dividend of 7.60 EUR in the first half of the year. This had a negative impact of approximately 283 base points on the CET1 ratio.

I have an indirect long position in the KBC Group and I have no problem to continue to add to my position on additional weakness as I do believe the bank has what it takes to get through the current uncertainty on the European continent. While I fully understand the market’s concerns as we are experiencing a major economic shock due to inflation, energy scarcity and a general lack of visibility, the bank is generating in excess of 3B EUR per year in pre-tax and pre-loan loss provision earnings (excluding the impact of a potential net interest income increase) which could act as a buffer. While one can obviously never rule out temporarily lower dividends or a suspension if the health of the bank is threatened, I prefer the short pain and wouldn’t mind that if that’s what’s needed to protect the balance sheet.

To be perfectly clear: That’s just a worst case scenario. The bank has already announced a 1 EUR interim dividend payable in November and has reiterated its dividend policy to pay out at least 50% of the consolidated net income as a dividend (but of course if the impairment charges will have an impact on the reported net income). Additionally, the board of directors will – at their discretion – decide to also return the surplus capital (defined as anything over a fully-loaded CET1 ratio of 15%) to the shareholders in the form of a dividend and/or share buyback.