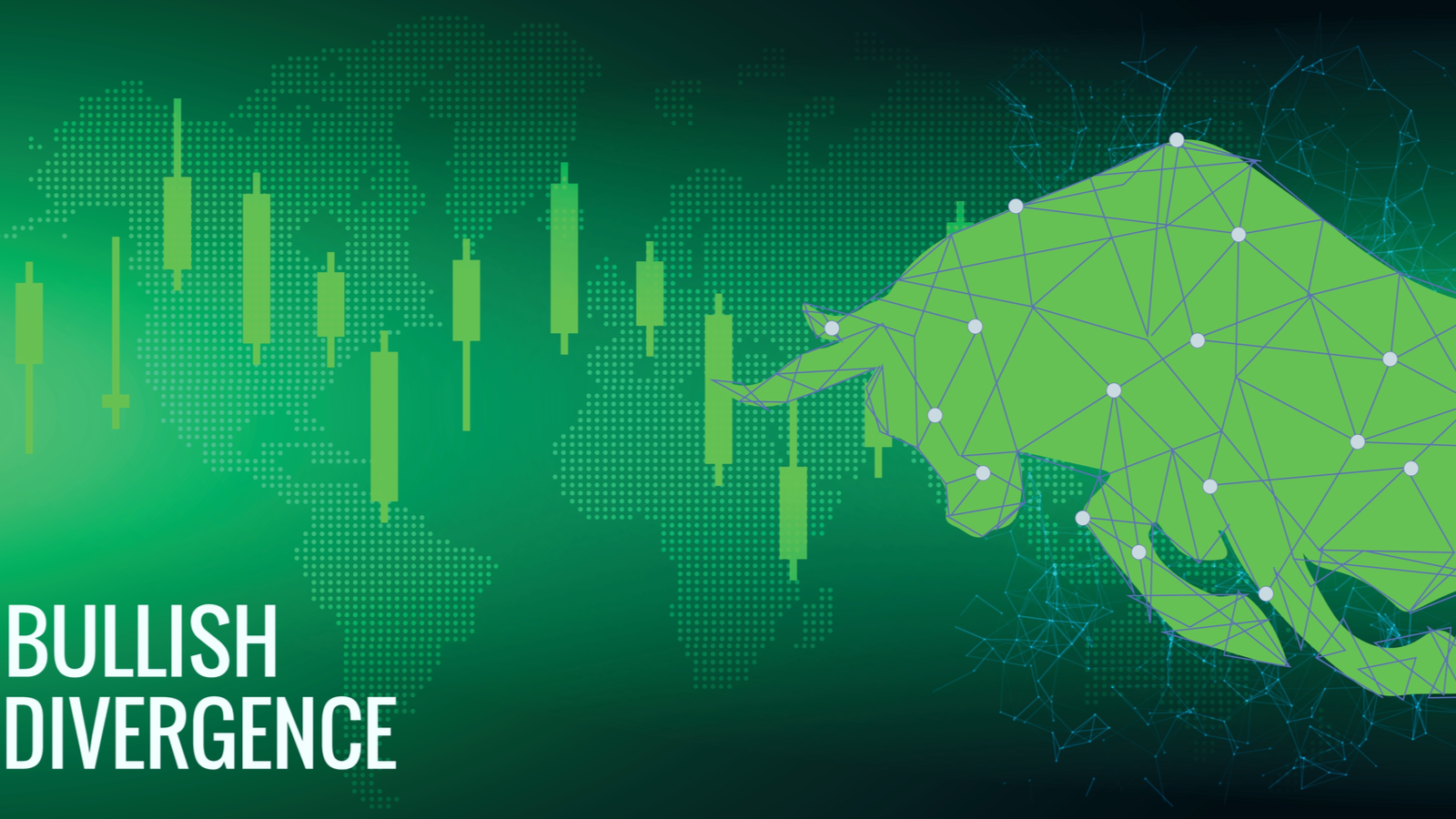 Investors have been inundated with bad news recently. So let me give you some good news: The bottom is close – and a generational buying opportunity is just around the corner.

Or consider this. The 2008 bear market ended when individual investor sentiment got so bad that the percentage of bears in the market outnumbered the percentage of bulls by more than 40%? That just happened last month, so we’re already there.

The technical, fundamental, and sentimental indicators all agree. This bear market is almost over. We’re in the final innings of this ball game. Up next? Nine innings of a new bull market. And investors who buy early in that new bull market will put themselves in a perfect position to make enormous sums of money over the next 12 months, three years, five years, and even 10 years and beyond.

The buying opportunity of the century is upon us. Will you capitalize on it?

The Rare Phenomenon That Will Help You Beat the Bear Market

Longtime readers are familiar with the ultra-rare divergence phenomenon that is emerging in the stock market right now. It is a phenomenon that, if you understand it fully, can help you capitalize on the upcoming buying opportunity of the century.

In short, divergence is all about stock prices diverging from their core fundamentals. This phenomenon only emerges during periods of peak market volatility. It happened in the late 1980s, the early 2000s, during 2008/09, and briefly in early 2020. Each time, it gave investors the chance to double or triple their money in 12 months and score 10X returns in five years.

It is, in short, the financial opportunity of a lifetime. And it is happening again right now for the first time in 14 years.

Better yet, our models indicate this is the biggest divergence yet.

You can forget doubling or tripling your money in 12 months. The opportunity in the 2022 Divergence could be much, much bigger.

To recap, divergences happen when stock prices diverge from their fundamentals. Perhaps the best way to illustrate this is by comparing a company’s stock price with its revenues.

Divergences occur when this very powerful relationship breaks. That is, revenues and earnings keep moving higher, but the stock price drops. And that creates a generational buying opportunity in the divergent stock.

Right now, we are seeing some huge divergences emerge in certain stocks across the market. In fact, these are some of the biggest divergences we’ve seen in the history of the stock market.

Shopify is a provider of e-commerce solutions to small- and medium-sized retailers. The company is riding the wave of online selling trends and the democratization of retail. Its revenues have been and are projected to keep growing very quickly. Yet, the stock has collapsed recently, creating an enormous divergence between fundamentals and price. By the numbers, this is one of the largest divergences we’ve ever seen.

See the chart below. Historically speaking, next, the purple line should rapidly snap back to the orange/blue line, setting the stage for quick triple-digit gains in the stock. Our numbers indicate that due to this divergence, Shopify stock could soar 4X or 5X in a hurry! 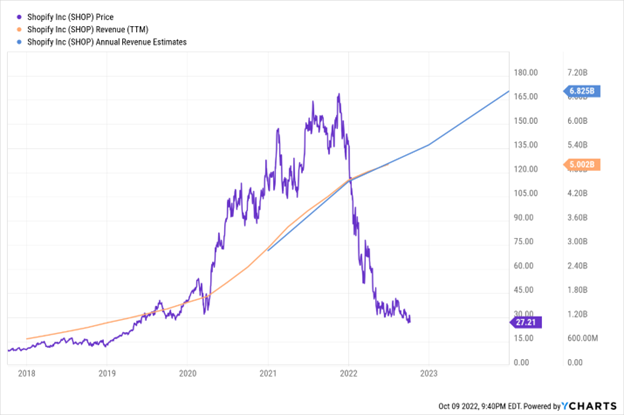 Roku is a streaming device maker that operates a TV software ecosystem that connects consumers to their favorite streaming services. It is basically the “cable box of streaming TV.” The company has always and will continue to grow like wildfire as more and more users, content, and ad dollars shift into the streaming TV space.

Yet, the stock price has collapsed recently – without a drop in revenues – creating an enormous divergence. Our numbers indicate that this is one of the largest divergences in history and will result in a fast 300%-plus rally in Roku stock. 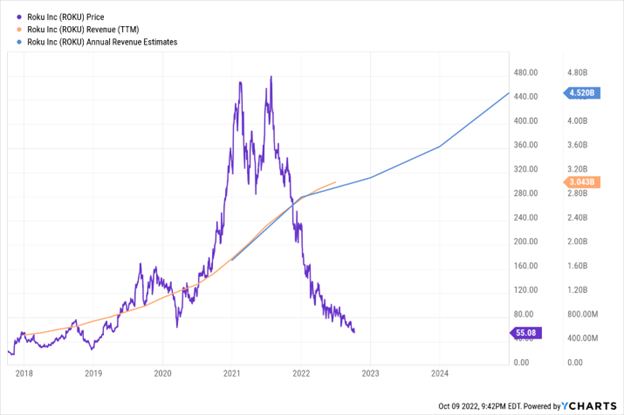 The list goes on and on. Across the stock market today, we are seeing some huge divergences emerge in individual stocks with enormous growth potential. This is creating an ultra-compelling investment opportunity, the likes of which we haven’t seen since 2008.

One of the more interesting discoveries we made about these divergence phenomena is that, in short, size matters.

Take a look at the following scatter plot. It graphs the size of various divergences (the X-axis) alongside the size of their12-month forward returns (the Y-axis) across multiple historical examples from 1988, 2001, and 2008. 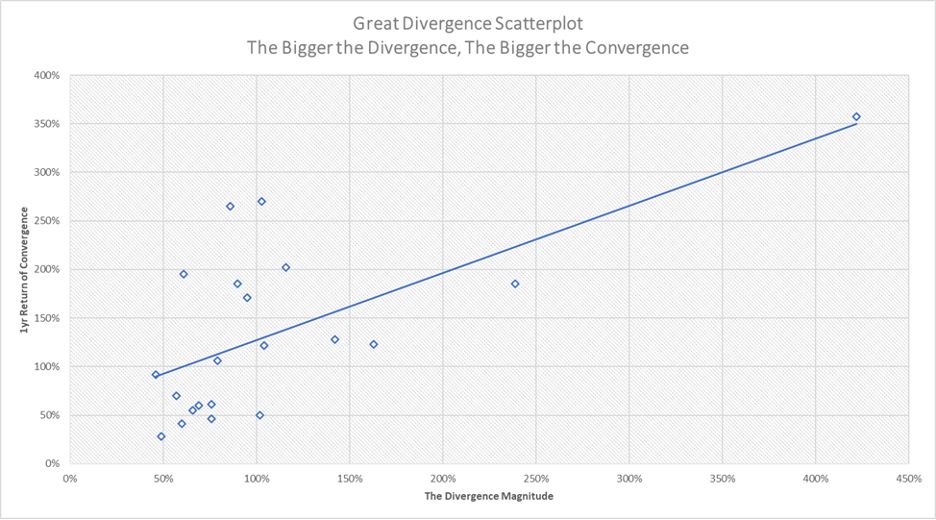 That’s important because as noted earlier, what we’re observing today are some of the biggest divergence examples we’ve ever seen.

Of course, there’s Shopify and Roku. But relative to some of the other divergences out there, those examples are actually small.

The Final Word on Divergence

Divergence, the greatest stock market phenomenon in capitalism’s history, has reemerged on Wall Street for the first time in 14 years.

That’s why I highly urge you to sign up for our Zero Hour Summit.

Tomorrow afternoon, at 4 p.m. EST, I will be releasing an emergency broadcast on the 2022 Divergence Window. I’ll unveil my top stock to buy to play this phenomenon right now, reveal a brand-new portfolio of ultra-high-upside divergence stocks, and make bold predictions about where these stocks will go over the next 12 months.

But this month – October 2022 – will be the last time you hear from me about this phenomenon….

Because the reality, folks, is that the 2022 Divergence Window is closing. The bear market has run its course, and the absolute bottom – the perfect buying opportunity – is close.

That’s why we’re calling this the Zero Hour Summit. It is the figurative final hour to capitalize on this opportunity.

We’ve hit peak fear in markets. We’ve hit capitulation. Indeed, we’ve hit that point in the bear market cycle where everyone throws in the towel, and the apocalypse becomes the base-case scenario.

And historically speaking, that’s when divergence windows close – and divergence stocks start to soar back to their “true price” lines.

We’re at that point now. This is the zero hour. It’s “now or never” time.

Don’t let this opportunity – maybe the best investment opportunity you’ll ever encounter – pass you by.