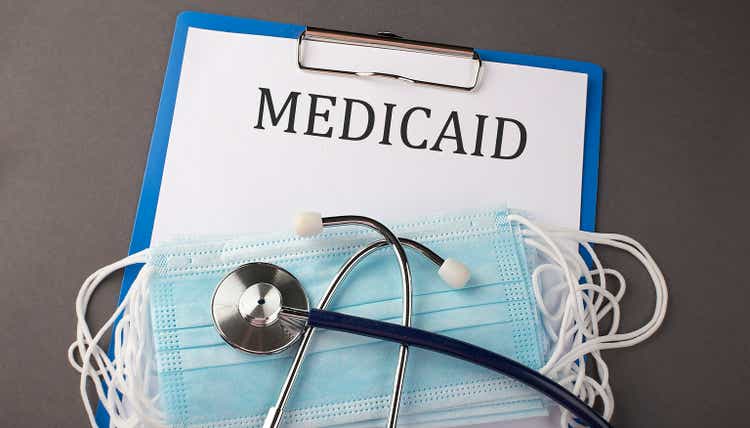 Centene (NYSE:CNC) has been crushed in the past two months being down over 20% despite not having any negative catalysts. The company has made many valuable M&A transactions and has plans in place to create short and long-term value to shareholders. This stock does not deserve to be this discounted and investors should buy Centene as a cornerstone of their portfolio.

Centene Corporation is a multinational healthcare enterprise that offers programs to underinsured and uninsured individuals in the US. They have two segments; managed care and specialty services. Of these two, managed care is by far the larger representing over 95% of the company’s revenue. They are the largest insurer of Medicaid in the US and are continuing add markets in Medicaid, Medicare, and individual plans. Based in St. Louis, MO, Centene is under the helm of a new CEO, Sarah London. London took over in March 2022 for the previous CEO Michael Neidorff, who led the company as CEO for over 25 years.

There are many reasons why I believe that the market is undervaluing Centene. Below I discuss my reasonings and thought process behind my conviction for Centene long-term.

Underestimating the impact of past M&A transactions

One of the main ways that Centene adds value to shareholders is through M&A. Management believes that using capital for M&A transactions is key to increasing market share, expanding margins, and outperforming its competitors. Naturally, Centene has historically been very active in the M&A market for many years. There are two main recent acquisitions that I would like to touch on.

In January 2020, Centene finalized the acquisition of WellCare Health Plans for over $17 billion. This move cemented Centene as a powerhouse in the Medicaid market while expanding its Medicare offerings to customers. It has already proved accretive to adjusted EPS by expanding the national network for Centene, adding more members to both Medicaid and Medicare programs, and creating cost synergies in the range of $500 million per year. I still think that the market is underestimating the impact of such a big transaction.

In January 2022, the company announced that it had finalized its acquisition of Magellan Health for about $2.2 billion. This move was also substantial given that it further expands what Centene can offer to customers and add more government plan members. Similar to the previous acquisition, this transaction has proved valuable and accretive to shareholders, mainly by the expansion of Centene’s specialty services segment. I see this acquisition as a move to diversify some of Centene’s operations and allow members to have more inclusive health plans.

Trading down 20%+ despite being fundamentally sound

One of the main reasons for writing this article was to bring to light how Centene has been battered by the market in the last two months despite have no negative catalysts and solid fundamentals. This drop in the stock price offers perspective investors an opportunity to jump into the stock while it is still trading at a discount. While nothing has changed with the company, it has still trading at a price over 20% higher than what it was about two months ago at about $95.

Company will increase margins on top of revenue growth

On top of the top line growth that the company will see in the future through their past and future M&A transactions and organically adding members, management is seeking to increase margins in a move that will add over $2 in adjusted EPS by 2024. Most of the top management team for Centene is relatively new to their roles. CEO Sarah London has made it clear that they are focussed on increasing EPS by almost 50% by expanding gross margin, lowering SG&A expense, and using capital to strategically add value to shareholders.

Centene has proven that they are a market leader when it comes to providing government provided health plans. Like I stated earlier, they are continuing to increase market share through M&A transactions as well as organically. They are the number 1 provider of Medicaid in the entire country representing about 16% of the market according to the Kaiser Family Foundation.

Not only do they have market share, but they are adding market share every single year. This company has shown that it can massively grow member base in many different ways and that will continue under new management.

I’ve told you about the company and how it is market leading, but I want to show you cold hard number to back up the evidence I have presented. I created financial models to assess the financial situation of the company. Using both a discounted cash flow model and relative valuation, I discuss how this company is in prime position to skyrocket.

First, I will discuss my discounted cash flow valuation by using a free cash flow to the firm model which forecasts future cash flows and discounts them back to present day. I used a weighted average cost of capital of 8.81%. To calculate this, I used a bottom-up beta by comparing Centene against some of its biggest competitors. I also wanted to include industry wide risk, not just risk associated with Centene specifically. I used a cost of debt of 7% which is about what Centene would be borrowing at if they were to issue new debt today. Lastly, I used a risk free rate of 4.05%, which represents the 10-year treasury as of the valuation date.

Once I had my WACC, I created a detailed free cash flow to the firm model. In this model, I forecasted revenue, expenses, and free cash flow out 20 years. I slightly increased gross margin over the next couple of years to account for organization changes that I have already discussed. I also decreased SG&A expense as a percentage of revenue for the same reason. My revenue forecast represents what I believe the company will grow at in the future with a mid to high single digit growth over the next 5-7 years with growth rates slowly decreasing after that. I used a terminal growth rate of 0.50%. With all of that considered, I arrived at an implied share price of $100.26. This represents a current discount of over 35%.

As my second form of valuation, I used relative valuation which compared Centene to its competitors to see how it matched up against them. The companies I used for my analysis were:

Looking at the numbers, I believe that Centene ranks third out of five in this group. What they lack in efficiency and profitability marks, they more than make up for it in growth and risk. They are better positioned than most in this group going forward and given that Centene is down 20%+ in the last two months, it should not be surprising that their multiples are low.

I decided to use a forward looking EV/EBITDA multiple because I have found that in this industry, earnings can be widely variable from year to year and I believe that using this approach will better represent each company. Currently, Centene has a forward multiple of 9.62 which is lowest in this group. In my opinion, Centene deserves a multiple increase to 11.5 because while it is still lower than Humana and UnitedHealth, it is higher than Elevance and Molina. Through my research, I think that it is more than fair to rank Centene higher than Elevance and Molina due to their market share, growth, and risk. With NTM EV/EBITDA multiple of 11.5, that again represents a large discount to the current price.

As you can see, both my discounted cash flow model and relative valuation further my conviction that Centene is undervalued. The drop off in stock price recently is unwarranted and allows for an attractive entry point to perspective investors.

Before investing in this company, it is important for investors to recognize and understand the risks associated with this company. Here are a few risks to take note of:

Part of the financing for the M&A transactions that I have discussed has increased the debt of the company. While I am not worried about Centene’s ability to repay the debt, it is something to understand in the ever-concerning economic environment which proves difficult to borrow

Given that Centene’s revenue largely comes from government-provided programs such as Medicaid and Medicare, it can be concerning that such a large portion of their revenue depends on the government and regulations surrounding the industry. This does not make me nervous because Centene has established themselves as being the best in the country in providing service to Medicaid and Medicare members.

Being in such a competitive environment could damper growth for the company because now companies are allowed to bid on health plans. With the new marketplace, new competitors into the space could undercut Centene’s price and take members. I am not concerned about this given the company’s market share and presence in the industry.

Through my analysis and research into this company, I have developed a solid understanding of Centene and where they stand in the industry. It is my strong belief and conviction that this company is being undervalued and being overlooked by the market. Management plans to increase organizational efficiency along with being the market leader in providing Medicaid to millions of members are both solid reasons to buy into this company in the first place. Bottom line is that this company is trading at a 20%+ discount to what it was trading at about two months ago with no catalyst for such a large move. To me, this is a no brainer and that is why I am recommending a strong buy.