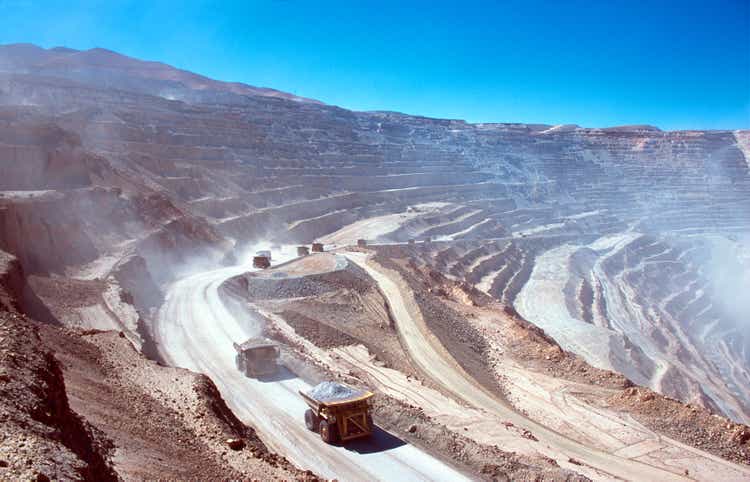 In almost all of my articles, I combine macro developments with actionable ideas. I do that because it allows readers to apply the macro background to other investments as well – or to just be aware of potential future developments. In this article, we discuss one of the most important topics related to basic materials and inflation: copper prices. I’ve written quite extensively about it in articles like this one, where I discussed severe future copper supply shortages.

In this article, I will continue to discuss looming shortages as we’re faced with an ugly situation: supply is subdued and inventories are “empty”.

Right now, that’s not that big of a deal as global recession fears come with lower demand. However, as soon as demand comes back, we’re likely faced with a steep surge in copper prices.

Hence, in this article, I discuss a stock that deserves more attention. The Phoenix, Arizona, based copper producer Southern Copper (NYSE:SCCO) has the world’s largest copper resources, subdued production costs, the opportunity to boost output, and a valuation that makes the company an attractive copper investment.

In other words, in this article, I’m going to explain why this title isn’t clickbait.

A Quick Look Back

Earlier this month, I wrote an article titled “The Ultimate Net Zero Trade: Why I’m So Bullish On Caterpillar”. The article focused on Caterpillar’s (CAT) ability to benefit from a situation where future copper demand rises – backed by low inventories.

What we are dealing with isn’t just “normal” long-term growth backed by higher infrastructure demand and everything related to that. The new situation is a somewhat “forced” increase in demand by net-zero targets.

As I wrote in that article:

[…] a trend toward net zero will mean one thing for sure: accelerating demand for materials. Batteries, solar panels, wind turbines, vehicles, and efficient buildings, all require more materials. Hence, by 2050, we’re looking at a situation where we need more than $400 billion worth of critical metals in order to replace coal.

Between 2021 and 2040, annual copper demand is expected to grow by roughly 53% to almost 40 million metric tons – driven by the electrification of transport and infrastructure.

The problem is that supply is expected to rise by only 16% during this period, causing a shortfall of more than five million tons, in a best-case scenario.

At this point, the recycling argument is valid. However, there is no way recycling can change this situation. It also doesn’t help that the quality of copper ores is falling, meaning mines will need to mine more ore in order to get the same amount of copper.

On top of that, commodity producers are massively underinvesting in their businesses compared to prior cycles (based on global GDP) as the chart below shows.

All of these things are extremely bullish for copper prices.

However, before we look at copper prices, there’s more we need to discuss.

China, the largest global copper consumer is becoming more dependent on imports to meet its demand. Bloomberg reports that the Chinese copper market is at its tightest in more than a decade as traders pay huge premiums for supplies.

“The physical market is so tight, it’s like a room full of gunpowder — any spark and the whole thing could blow,” said David Lilley, chief executive of hedge fund Drakewood Capital Management Ltd. Without the Shanghai bonded inventory, “we are living without a safety net.”

Bonded copper stockpiles are called “bonded” because the metal there is held “in bond” before import duties have been paid. When copper prices slumped in the past, Chinese buyers bought all the metal they could find, making copper the leading indicator of the global economic recovery after the Great Financial Crisis.

These inventories were used to raise financing, leading to new investments in i.e., infrastructure.

In 2011/2012, these bonded stocks were valued at roughly $10 billion, covering close to one million tons of copper. This month, inventories are down to 30,000 tons, down another 300,000 tons from levels earlier this year.

The decline started to gain momentum in 2014 as a result of fraud, causing banks to reassess their appetite for Chinese metals.

Unfortunately, the latest decline in inventories is caused by slower economic growth, rising interest rates, and the liquidation of at least one major copper trader in China.

Both J.P. Morgan (JPM) and ICBC Standard Bank have not entered new metal financing trades for bonded metal since September, according to insiders. That’s a big deal.

Again, given the macro circumstances, these developments seem to make sense. However, what if demand comes back? Inventories are at dangerously low levels.

And it’s not just in China that stocks are low. Robert Edwards at CRU Group estimates that global copper stocks currently stand at just 1.6 weeks of consumption — the lowest ever in the consultancy’s data going back to 2001.

As a result, any improvement in the macroeconomic outlook or pickup in Chinese demand could have dramatic implications for global copper prices.

When looking at copper prices, we see a (very) volatile uptrend. In the early 2000s, copper primarily benefited from rapid growth in China and a weakening dollar. Between 2008 and 2011, copper benefited from the post-Great Financial Crisis recovery, which was fueled by the aforementioned stockpiling of copper in China. The uptrend after 2016 was fueled by a rebound in global manufacturing demand, which weakened in 2018. Then, the pandemic caused the steepest surge since 2008 as investors found out that supply growth was about to remain subdued on a very long-term basis.

Now, copper prices are down roughly 30%, which I believe will be followed by a surge well beyond the prior peak in the next 10 years and beyond.

That’s where Southern Copper comes in.

Southern Copper has a market cap of $37.7 billion. The company was incorporated in 1952 in Phoenix, Arizona, where the company has its headquarters. Southern Copper is a subsidiary of Americas Mining Corporation, which is a holding of GrupoMéxico.

Southern Copper is 88.9% owned by Americas Mining Corporation and 11.1% by the public. Normally, I am not a huge fan of these large insider holdings, yet the Mexican parent company aims to run highly-successful mining and infrastructure companies, which is why its interests are aligned with shareholder interests.

Southern Copper has a number of qualities that I believe make it a suitable play.

As the overview below shows, the company has both open pit and underground operations in both Mexico and Peru. Most refineries and smelters are in Mexico with new projects coming online in Peru. The company has 42.4 million tons of copper reserves.

Production costs are roughly $0.82 per pound of copper. The composite cost curve shows the company’s advantage versus its major peers.

It helps that these operations are exposed to low geopolitical risks. These risks are a reason why I don’t really like investing in mining stocks. However, there are exceptions. SCCO is an exception. Mexico is very business-friendly. The same goes for Peru. While risks are higher, the country has opened up to new investments.

The business climate in Peru is generally attractive. Foreign trade has been extensively deregulated in recent years, state interference in free trade is minimal and the present government is continuing many of the business-friendly policies of previous governments.

SCCO mines have an average life of 50 years, which is industry-leading. In its mines, 78% of production is copper, followed by molybdenum, zinc, silver, and others.

In the years ahead, the company will accelerate its capital expenditures to boost production to 1.8 million tons of copper by 2029. This will require $2.0 billion in average annual CapEx, with a peak of $4.5 billion in 2026.

What this means is that after 2026, free cash flow generation will rapidly accelerate – even without higher copper prices – as CapEx requirements will implode between 2026 and 2029.

With that said, even under current circumstances, SCCO is attractively valued. The company is expected to do at least $5.0 billion in annual EBITDA, generating upwards of $2.7 billion in free cash flow in 2024. Please note that this is under current circumstances. Analysts normally do not incorporate a strong copper bull case as they refrain from predicting commodity prices. In other words, I believe that the company will do much more in EBITDA in 2024 than the consensus estimate of $6.2 billion.

Also note healthy net debt levels, which are at less than 1.0x EBITDA, providing a healthy basis for accelerating CapEx requirements – boosting mine output in the years ahead.

The company is currently trading at a $42.3 billion enterprise value, consisting of its $37,7 billion market cap and $4.6 billion in net debt. That’s roughly 6.8x EBITDA of 2024E EBITDA.

The next chart shows SCCO versus the price of copper (outright, no ratio).

I believe that SCCO will at least double in the years ahead.

However, investors need to be aware of the cyclical and volatile behavior of the stock – and its peers. We’re still in a recession (depending on the definition), and I am not sure when markets start to price in higher demand. My guess is in the first half of 2023, but that may change.

The best way to play SCCO is by buying small positions and adding gradually over time. I don’t see a need to go aggressively overweight. Sure, that will bring in more money when I’m right, but I like to adjust my exposure to volatility.

I believe one of the best ways to play this trend is by buying Southern Copper. This company has high-quality mines in stable regions, low production costs, high reserves, and the ability (and plans) to boost output in the years ahead.

The valuation is attractive.

I believe that copper will fly as soon as the market starts to price in higher demand – likely in 2023. At that point, SCCO is poised to double again.

(Dis)agree? Let me know in the comments!