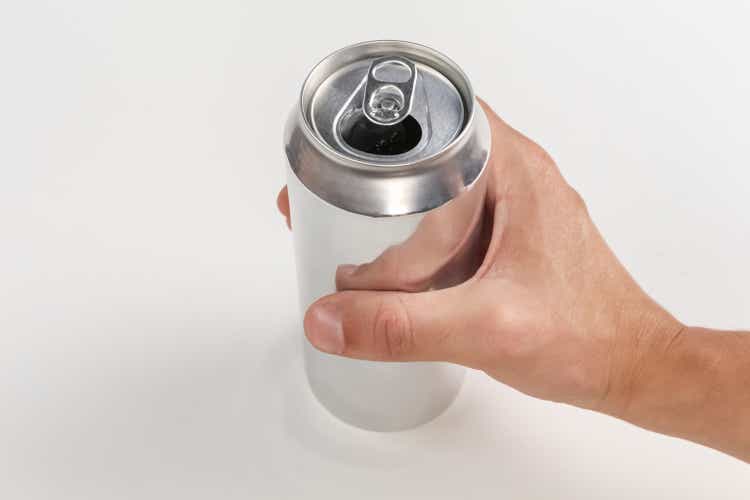 Ardagh Metal Packaging (NYSE:AMBP) is one of the largest aluminum beverage can producers in the world. Unfortunately the entire sector is navigating through tough times as the demand increase is slowing down while most of the contracts with the customers include just one inflation adjustment per year. Competitor Crown Holdings (CCK) has warned Q4 may still be difficult as it can only pass on inflation-related expenses to its customers in 2023 and AMBP isn’t any different. AMBP reported its Q3 results which came in below the official guidance, but the company guiding for a sharp EBITDA increase in Q4 although the market clearly doesn’t believe that guidance to be realistic. For an overview of the company’s business model, please read my 2021 article on AMBP.

The Q3 cash flow came in lighter than expected

We shouldn’t sugarcoat things: the third quarter performance of Ardagh Metal Packaging was weaker than expected. While the total volumes increased by a high single digit percentage compared to the same quarter last year, the demand was actually below expectations, and Ardagh expects these conditions to continue throughout Q4 2022 and the first half of 2023. The EBITDA of $140M was rather disappointing as that result came in at about 20% below the Q3 guidance. While AMBP refers to higher input costs and the costs associated with ramping up the production rate in the new production facilities, I am somewhat surprised this weak result came out of nowhere.

If the EBITDA comes in 20% below the guidance, I just have a tough time believing the company only find out in the past few weeks or so. I think a profit warning would have been a better approach as the weakening circumstances must have been pretty clear throughout September. Rather than preparing the market for a weak result, Ardagh chose to deliver a negative surprise. That’s disappointing. And while I understand headwinds may occur in any phase of the production process and while I acknowledge these higher expenses cannot immediately be passed on to the customers, AMBP does have a duty to keep its shareholders appraised of how the situation is evolving.

The company was profitable and reported a net income of $68M for an EPS of $0.10, the vast majority of this net profit was generated through the impact of exceptional items. That’s why I think we should continue to look at AMBP from a cash flow perspective as that also is how I previously judged AMBP’s performance.

Ardagh’s Q3 operating cash flow was $61M on a reported basis, but the starting point was a $43M ‘cash generated from operations’. And the footnotes to the financial statements provide a better breakdown of what’s actually included in this starting point.

As you can see above, the $43M starting point includes $50M in working capital investments and $46M in exceptional items. That’s important as my investment thesis is based on the sustaining free cash flow: the free cash flow generated by the company on an underlying basis, so excluding non-recurring items and growth capex.

We now know the $43M in cash generated from operations is underestimating the normalized operating cash flow by $97M. This also means the exported operating cash flow of $61M is actually $158M. There is however one point of attention here as the first and third quarters are particularly interest light as the majority of the interest expenses is paid in Q2 and Q4. This means that instead of the $4M in interest expenses paid during Q3, I should use the normalized $25-26M per quarter. On top of that, we need to deduct the $14M in lease payments which means that on a normalized basis, the operating cash flow adjusted for exceptional items and working capital changes was approximately $122M.

The Q4 outlook is okay, but the market is applying a wait-and-see approach

Fortunately, Ardagh understands the message sent by the market and the investments in growth will be reduced to just $600M. This still means the final quarter of the year will be relatively heavy when it comes to capex and the full-year capex bill will likely come in around $700-750M.

While these investments in growth will ultimately result in a higher EBITDA and free cash flow as well, it is clear the market would also like to see the company focus on balance sheet strength so I anticipate the 2023 capex to drop down even further. As the new facilities are completing the ramp-up phase we should see the exceptional costs related to this ramp-up phase decrease, which means the reported operating and free cash flow will increase.

Ardagh is guiding for a full-year EBITDA of $640-650M and for a Q4 EBITDA of $175-185M. That actually sounds good but let’s not forget AMBP promised a $175M EBITDA for Q3 and the actual result came out 20% below that target. So I can’t blame the market for applying a ‘wait-and-see approach’ as Ardagh Metal Packaging will have to work on regaining the trust from the financial markets.

From an absolute point of view a normalized sustaining free cash flow of $92M isn’t bad. But the problem is that Ardagh Metal Packaging missed its EBITDA guidance by about 20% which obviously also weighed on the operating and free cash flow result. And while I’m fine with excluding the exceptional items from the equation to figure out the normalized underlying free cash flow, let’s not forget it still represents a real cash outflow which means the net debt of Ardagh isn’t decreasing at all.

It just looks like Ardagh Metal Packaging still hasn’t figured out how it can communicate with the market. Not releasing a profit warning when an EBITDA comes in about 20% below the guidance is not exactly helping the company’s credibility and I think that is the biggest issue at hand here.

I retain my long position but I can’t say I am very happy with how AMBP deals with the capital markets and I still wouldn’t be surprised if majority shareholder Ardagh Group would try to acquire AMBP at a discount compared to the $10/share it went public at.