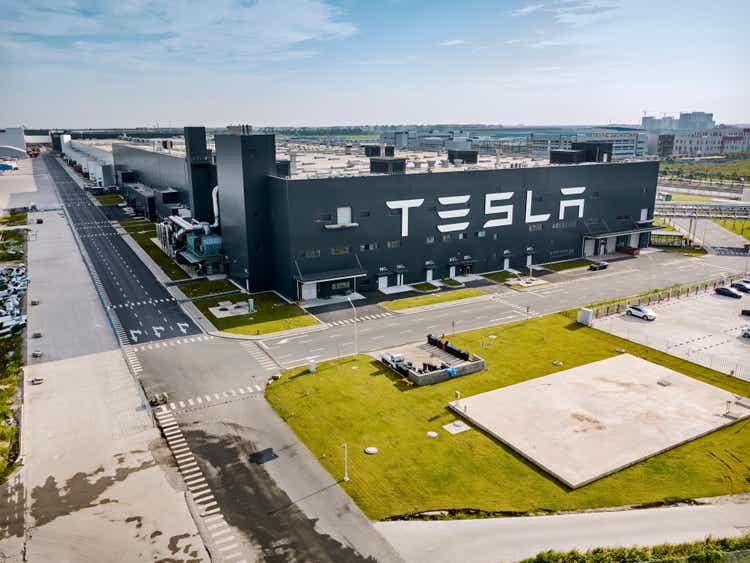 We are buy-rated on Tesla, Inc. (NASDAQ:TSLA). Our bullish sentiment is based on our belief that Tesla is the best-positioned automaker to take advantage of the global Electric Vehicle (EV) adoption. Tesla is the world’s largest automaker by market value, with a goal of accelerating the global switch to sustainable energy. While Tesla’s CEO Elon Musk often overshadows the company with his famous tweets about Ukraine-Russia peace plans or weed jokes, our analysis of Tesla is strictly on the company’s business.

Despite the rough quarter, we expect the company’s automotive revenues to grow meaningfully towards 1H23. We expect increased gas prices will be a growth catalyst for Tesla as more people will lean towards the electric option. We believe Tesla is rearranging itself to meet the growing demand for EVs. The company has reported that it will be ramping up production in Berlin and elsewhere. Despite the current macroeconomic environment and supply chain issues, Tesla’s revenue grew by 56% Y/Y. We believe Tesla’s automotive gross margin, which is the percentage of profit on sales of new vehicles, is a vital metric for valuing the company. Tesla’s automotive gross margin grew 27.9% growth this quarter, which is high for the auto industry. While Tesla is down 37% YTD, we believe the EV industry is still growing. We recommend investors take advantage of the pullback and enter the EV industry through Tesla stock.

Musk being the face of Tesla is both a blessing and a curse; it simultaneously brings the company a lot of traction but also often buries its business behind Musk’s character. A lot of criticism has been aimed at Tesla’s CEO, specifically at his Twitter acquisition. We’ve been surprised that multiple Seeking Alpha investors value the company by factoring in Musk’s tweets and actions. Musk controls Tesla, but we believe his positive or negative tweets should not overshadow the core business at hand: the EV industry. The global electric vehicle market is expected to grow at CARG of 24.3% between 2021-2028.

We believe the current macroeconomic environment offers a double-edged sword for Tesla. On the one hand, it slows demand as consumer spending has weakened and more people focus on paying back their interest debt rather than buying new cars. On the other, gas prices are soaring, and we expect this to incentivize more people to shift to EVs. A gallon of gas now costs$3.99 in October 2022 (with a gallon reaching up to $6 in some states), while it cost $2.17 just a couple of years earlier, in 2020. We believe global EV adoption is underway, and Tesla stands to take the biggest piece of the pie.

Tesla reported 343,000 total deliveries and 365,000 vehicles produced during 3Q22, an increase from the 258,580 vehicles produced in 2Q22. Tesla’s production is growing at about 42% Y/Y. We believe the company will continue to benefit from the long-term shift to electric vehicles. With facilities in Shanghai, Berlin, and Austin, Tesla has amassed considerable money and engaged in a significant global manufacturing expansion. While the competition for EVs is intensifying, we believe that it will be difficult to overtake Tesla in the near future as Tesla enjoys the “first-mover advantage.”

Tesla’s stood out as America’s carmaker for years now, but we believe competition is penetrating the market more seriously. Ford (F) and General Motors (GM) are among the best positioned to compete with the company towards 2025, according to John Murphy, lead auto analyst at Bank of America Merrill Lynch. The Ford Mustang Mach-E is increasingly competing with Tesla’s Model Y.

We don’t believe Tesla is immune to competition; instead, we believe Ford and General Motors will likely steal some customers. Yet, as the EV adoption takes place, we believe there are more than enough customers to go around over the next decade. Despite the competition, we still believe Tesla has the “first-mover advantage.” We expect other car companies will be forced to spend extra on advertising to let people know they’ve entered the EV market, while Tesla’s already made a name for itself in it.

Tesla’s 3Q22 witnessed Model S and Model X reach their highest production levels in three years. Tesla delivered 18,672 Model S and Model X vehicles last quarter, the highest production since 4Q 19. Model X became the best-selling EV in the U.S. We’re excited about the company’s new models, Semi and Cybertruck, that were supposed to come out this year but were delayed until next year.

The following table shows Tesla’s production and deliveries of its Models over the quarters.

We expect Tesla will increase ASPs on its newer Models, further boosting revenues towards 2023. Tesla achieves around 88% of its revenue from its automotive segment. We believe the company will benefit from increasing ASP and allowing the increased costs and expenses to trickle down to the consumer. The price increase will likely help boost revenues, but it also leaves the company more vulnerable to competition offering better pricing. Tesla’s cheapest vehicle costs around $46,000, while the upcoming Chevrolet Equinox hovers in the $30,000 range.

Battery materials constraints and more expensive and complex transportation capacity to deliver vehicles have been significant headwinds for the company. Despite this, Tesla is focused on ramping up vehicle production.

Tesla’s operating income improved Y/Y to $3.7 B in 3Q22, achieving a 17.2% operating margin. Tesla noted that its operating income was affected by high ASP, growth in vehicle deliveries, and higher raw material, commodity, logistics, warranty, and expedite costs, among others.

Despite Tesla being down 37% YTD, it’s still outperforming its competitors, Ford Motor Co (F) and General Motors Co (GM). Over the past five years, Tesla grew around 888%, while Ford only grew about 6%, and GM dropped by about 21%. We remain bullish on the stock and believe that Tesla’s best days are still ahead.

The following graphs show Tesla’s performance among competitors over the past five years and YTD.

Of the 42 analysts covering the stock, 26 are buy-rated, ten are hold-rated, and the remaining are sell-rated. We share Wall Street’s bullish sentiment on the stock. Tesla is currently trading at around $208. The median price target is $317, and the mean price target is $284, with a potential upside of about 37-52%. The following chart indicates the sell-side ratings and price targets.

What to do with the stock

We believe investing in Tesla is equivalent to investing in the booming EV industry. We are excited about Models 3 and Y’s popularity and expect Tesla’s upcoming models next year to enjoy similar popularity. Our bullish sentiment is based on our belief that despite near-term macroeconomic headwinds and chip shortages, we expect Tesla is best positioned to benefit from the global adoption of EVs. We recommend buying the pullback.