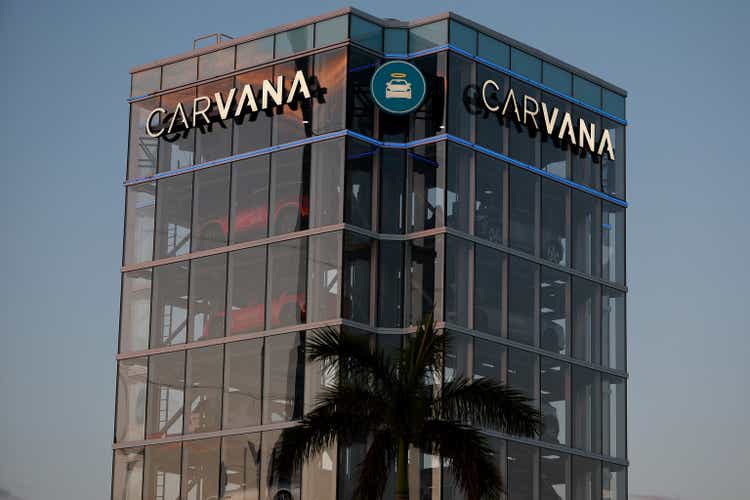 Carvana Co’s (NYSE:CVNA) stock is a very popular one amid short-sellers right now. After the recent earnings report, many analysts have dramatically reduced their price targets. It seems everyone expects the company to report its bankruptcy very soon. However, this is unlikely to happen. The future remains quite grim and there is plenty of uncertainty if the company would ever return to profitability. But a massive sell-off could be a good enough reason to acquire shares for a risky investor. Bear in mind that there could be both large losses and large gains to be made from buying this stock at the very moment. Let me explain this in some more detail.

Many of my Seeking Alpha fellow contributors wrote very good articles on the subject of Carvana Co’s earnings results and the company’s poor financial position. But, in my opinion, it is also a good idea to see a company’s earnings history, presented either as a diagram or as a table in order to judge its potential.

The very fact the company still did not manage to reach profitability when the used car sales were doing very well during 2021 alone inspires worries.

We can clearly see from the data above that the company’s car sales and revenues were rising in the last five years. And so was the gross profit. The surge was particularly obvious between 2020 and 2021 when many people in the US started buying used cars during the pandemic. The demand surge was mostly due to the government’s stimulus checks. But very important is the fact that even a substantial rise in the company’s revenues did not make the company record a net profit.

Another interesting point is the quarterly earnings history.

Interestingly enough but the latest quarterly report was not horrible on its own. There were some sales revenue drops previously on a quarterly basis, for example, between 4Q2021 and 1Q2022. Even more frequent were the gross profit decreases as you can see from the diagram above.

From the Y-Charts diagram below you can also see that the sales have decreased much less than the company’s stock price.

On the graph, it seems like the quarterly revenues have just started falling, whilst the share price has crashed dramatically. So, it looks like the market really overreacted.

It was mentioned by my fellow Seeking Alpha contributor that the company’s cash position was getting worse. “Carvana’s total liquidity reserves declined by $340 million in Q3 to less than $4.4 billion.” Even if we say that such a pace of liquidity reserve declines is normal for CVNA, it will take the company almost 13 quarters or more than three years to completely deplete the reserves. In no way do I suggest that it is good news but it seems like the company has plenty of time to improve its financial results.

Sure, Carvana has been facing many years of losses, a poor free cash flow record, and is suffering from quite poor credit ratings. So, it cannot borrow particularly cheaply. At the same time, the company has traditionally been able to access public debt and equity markets. Of course, that may change fast, given the economic situation. But we should not forget Carvana’s sound position in the segment it operates in. However, Carvana’s floor plan will end in March 2023. This means the company will lose one of the sources of external financing. The acquisition of ADESA Inc was also a blow to its cash position and an additional source of expenditures.

Funny enough but a bleak economic environment could turn out as a benefit to Carvana. When people’s real incomes soar, they might get more willing to buy new cars. But when households’ incomes are down, there might be a reasonable demand for used cars. In other words, second-hand cars are inferior goods. So, more people would switch to buying old cars if the economic situation gets worse. What is more due to logistics problems that still cannot get solved the supply of cars is still quite low, which is a positive for Carvana since it will keep the car prices high enough.

But the main upside, in my view, is the massive sell-off that recently happened. In other words, there could be a major bounce back. After all, the company is highly unlikely to file for bankruptcy in the near future.

The risks also include macroeconomic concerns. The Fed is getting hawkish and it will highly likely make the US economy enter a long recession. The same is true of many other central bakers all around the world. The very fact that interest rates are soaring can make indebted companies struggle much more than businesses with relatively clean balance sheets. CVNA will have to pay plenty of money in interest and/or heavily dilute its existing shareholders.

The most unpleasant point with Carvana is that it did not become profitable when the used car market was going through its fair days. The company’s revenues and car sales soared, whilst the net profits still were not there. The situation might get worse. But still, as I have mentioned before, the fears of imminent and immediate bankruptcy seem to be exaggerated, in my view.

Carvana’s valuation is the most interesting part of the thesis, in my view.

I decided to use the price-to-sales (P/S) and the price-to-book (P/B) ratios since the company is not profitable. The data were generated by Y-Charts.

We can say the company’s stock was somewhat overvalued and even bubbly end of 2021 – the beginning of 2022. However, never before has it been as cheap as it is right now. It is far below the normal P/S range of 1 – 3.

The company’s current P/B ratio is not too low if we compare it to the average P/B of S&P 500 currently standing at 3.78. However, it is unbelievably low for Carvana, if we look at the graph above.

So, it looks like the market overreacted to the recently published earnings results.

Overall, the long-term future does not look very bright for Carvana. However, I think the market is overreacting to the recent corporate earnings results. In no way do I suggest acquiring the shares of Carvana for highly conservative investors. But traders may wish to take advantage of such volatility, such undervaluation, and the panicking market that seems to bet on the company’s near-term bankruptcy. To traders, I would suggest not using large sums of money to bet on the company’s stock surge. It might also be a good idea to hedge your long positions with options. But for risky market players, I would say that there are huge gains to be made from the recent weakness, provided nothing extraordinary happens in the near term.