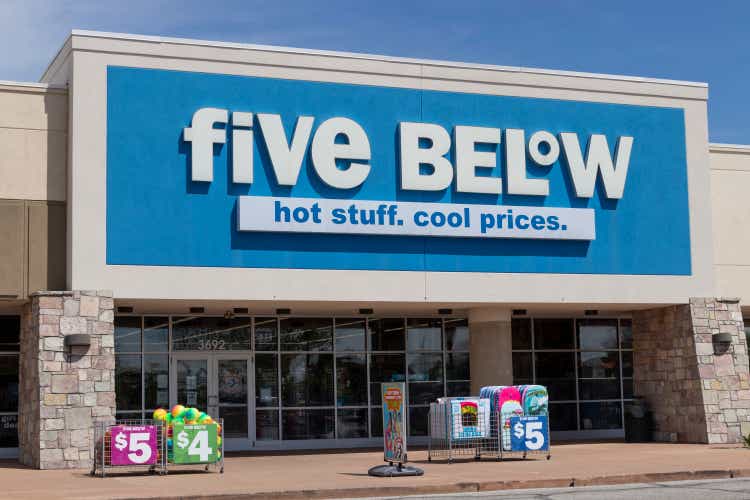 Weak current year results and general stock market malaise have caused Five Below (NASDAQ:FIVE) shares to fall 30% from their 52 week high and prompted me to take a look at the stock.

While Five Below has an enviable long-term track record of same-store sales growth, store growth, and operating margin expansion, at today’s price the stock is close to fairly valued. As a value investor, I’m waiting for a better entry point, which I discuss in the valuation section below.

Like many retailers, Five Below’s current year results have suffered due to consumer discretionary income being pinched by inflation and inflationary pressure on gross margins and operating expenses. Further, 2021 saw consumer spending bolster by stimulus measures making for tough same-store sales in 2022.

Further difficulty has arisen as supply chain shortages last year caused many retailers to over-order inventory – as inventory has now arrived but demand has softened, many retailers are becoming more promotional to clear excess inventory leading to a very competitive retail environment.

Five Below has seen operating income fall by 34% on the back of -4.8% comparable sales. Management expects continued tough results for the remainder of 2022 with declines in comparable sales and operating profits below last year’s record results.

While recent results have been weak, Five Below has been tremendous since coming public – shares have appreciated five-fold in the past decade (significantly outpacing the broader market).

While discount retail as a whole is competitive, there really is no direct national competitor to Five Below which primarily targets children and tweens in off-mall locations selling items for $5 or less. In some ways, the company is filling the gap in the market left by the exit of bricks and mortar toy stores like Toys R Us and KB Toys.

Beyond having limited direct competition, some of the company’s key competitive advantages include:

1/ Low Prices enabled by strong purchasing power – Five Below purchases over $2 billion worth of product annually and is an important customer to its suppliers. It passes on a portion of the savings to customers.

Five Below is considered a credit tenant (publicly traded, national retailer with a strong balance sheet) which is known for driving traffic to shopping centers. This puts the company in a strong negotiating position with landlords – adding a Five Below to a shopping center increases traffic to the center and boosts its overall value.

1/ A decline in global freight rates should boost operating margins. This is a meaningful near-term tailwind as global freight rates have come back to earth during 2022. What has been a massive profitability headwind for the past 12-18 months has now become a tailwind which will drive margin expansion going forward.

2/ As mentioned above, the current retail environment is highly promotional due to excess inventory meeting weaker consumer demand. With most retailers aggressively discounting to clear excess inventory, 2023 should see supply and demand in better alignment.

3/ Last week’s CPI report shows inflation is slowing which could be a boost to consumer spending.

In the long term, I expect Five Below to continue its steady upward trajectory of comparable sales, total stores, and operating profit. In the very long-term, Five Below targets 3,500 stores (nearly triple its current store count of ~1,300). I assume that the company is able to grow its store count by 180 stores per year for the next 5 years, bringing me to 2,400 stores by 2027.

I assume modest 3% same-store sales growth and operating margins of 13.5%. In the current year, Five Below is on track to do only 10% operating margins, these numbered are burdened with the confluence of negative factors described above in the ‘Current Results’ section. By contrast, last year the company achieved nearly 14% operating margins, though these results were well above trend given stimulus fueled consumer spending (and absence of discounting given supply shortages). Looking back to the last truly ‘normal’ year of 2019, Five Below did 11.8% operating margins.

In assuming 13.5% operating margins, I’m assuming 20 basis points of annual operating margin growth which is achievable as the company’s rapidly expanding store base affords it greater purchasing power with suppliers and brand recognition amongst consumers. This margin is also in-line with historical performance of fellow discounters Dollar General (DG) and Ross Stores (ROST). Admittedly Ross and Dollar General are slightly different businesses but probably the best comps for Five Below (which has limited direct competition).

Taking store growth, same store sales, and margin improvement into account, I get a 2027 EPS estimate of $10.60 per share. At this point, Five Below would have ~2,200 stores giving it an ample growth opportunity (to reach management’s long term 3,500 target). Given the company’s strong market position/brand and growth opportunity, I think the stock would be deserving of a 20x P/E multiple (this is the high-end of where discounters like Dollar General and off-price retailers like Ross have traded). This gets me to a 2027 price target of $212 per share which implies an annualized return of just over 8%.

My analysis above suggests that Five Below stock is within the range of fair value. As a value investor, I want to buy in at a 30% discount to fair value – in this case, I’d look to enter Five Below at a price of $105 or below which would be commensurate with a 14% annualized return to my $212/share 2027 fair value estimate.