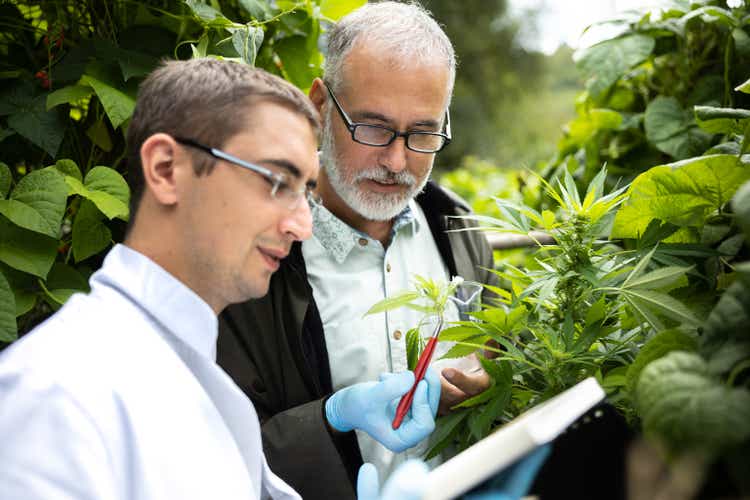 Schwazze (OTCQX:SHWZ), formerly Medicine Man Technologies, Inc., has been performing well in 2022 under difficult economic conditions that have hit the cannabis sector hard.

While its share price has dropped from approximately $3.25 in January 2021 to a 52-week low of $0.8665 on July 13, 2022, in response to its last couple of earnings reports, it has jumped to higher lows and higher highs, as the company continues to cut costs, increase sales, and rapidly increase its footprint in New Mexico.

For the quarter, the company also generated $4 million in positive cash and expects to generate positive cash flow for the year before acquisitions, one of the few companies in the cannabis sector to accomplish that.

In this article we’ll look at the latest earnings report of the company, its performance prospects going forward, and what the growth drivers will be going forward.

Most of the increase in revenue came as a result of acquisitions SHWZ made.

Net income in the reporting period came in at $1.8 million, up from $1.0 million year-over-year.

Adjusted EBITDA was $15.9 million, accounting for 36.7 percent of revenue, compared to $8.8 million in adjusted EBITDA last year in the third quarter.

Gross profit margin jumped from 47.3 percent in Q3 2021 to 60.1 percent in Q3 2022, which was primarily attributed to an increase in the percentage of retail sales and vertical product sales in New Mexico.

Other expenses were $3.7 million, an increase of $2.2 million, or 139 percent over the $1.6 million in Other expenses year-over-year. That came from paying higher interest payments because of increasing its debt load.

The revised revenue outlook came from wholesale sales coming in below expectations and delays in new store openings in New Mexico related to construction issues.

SHWZ has operations in the states of Colorado and New Mexico. In this section of the article, we’ll look at each of them and what the prospects are going forward.

In 2022 the company has 5 more cannabis dispensaries and one more cultivation facility.

On September 14 also announced it had signed definite documents to acquire some of the assets of Lightshade dispensaries for $2.75 million in cash. That will add a couple more dispensaries in Colorado, bringing the total to 25 at this time. Expectations are the deal will close some time in Q1 2023.SHWZ also entered into “a licensing agreement with Lowell Farms to manufacture and distribute Lowell Farms Smokes, a premier line of pre-rolled joints to dispensaries statewide.” Sales are expected to start in the fourth quarter of 2022.

After delays related to approval from the city, construction on its Colorado internal distribution center is nearing completion and should be operational in Q4. Management stated that the center will remove a lot of waste out of its supply chain.

Same-store sales were down 10.6 percent year-over-year, coinciding with the drop in the total customer visits to 452,220, down 10.7 percent from the third quarter of 2021. Even with the slowdown, the company outperformed the Colorado market by 12 percent in the reporting period.

Last, wholesale revenues continue to slide in the state because of oversupply in the market, resulting in downward pressure on prices.

So far, in 2022, Schwazze has increased the number of its dispensaries in New Mexico by 10 and added another four cultivation facilities in the state. It also added one more manufacturing facility in the market. New Mexico is also part of the licensing agreement the company made with Lowell Farms to sell its pre-rolled joints. A date wasn’t given as to when sales will start.

In April 2022 SHWZ started to sell both recreational and medical cannabis in New Mexico, with same-store sales climbing 48.4 percent in comparison to last year in Q3. Sales have been growing on a month-to-month basis since then.

Going forward, New Mexico will also continue to grow at it adds dispensaries to new, local markets across the state, focusing primarily on its southern and eastern borders. Recreational sales are also expected to continue to grow in the quarters ahead.

Revenue in New Mexico was $43.2 million in the third quarter, up 36 percent from $31.8 million year-over-year.

SHWZ is successfully driving down expenses and costs even as it invests in growth in the Colorado and New Mexico markets. It has made a big run since its earnings report, where investors liked what they heard.

For that reason, it would probably be best to wait for a pullback in its share price before taking a position.

I think the company is well-positioned to continue to grow revenue in 2023 and could outperform as it closes in on generating free cash flow before acquisitions, possibly on a consistent basis. It is driving down its internal costs, and benefits of wider margin are expected to “be fully realized in 2023.”

If that’s how it plays out, earnings and free cash flow will improve as the company grows its revenue from the moves it’s making in Colorado, and especially New Mexico, which has a lot of momentum heading into 2023.

What’s impressive to me is SHWZ doing this in very tough economic conditions and doing much of it with retail customers. Being able to maintain growth among retail customers is a competitive advantage because of higher pricing power and wider margin.

Assuming it can continue executing like that in 2023, it’s going to surprise a lot of people to the upside, especially if inflation drops significantly, the Federal Reserve stops or significantly reduces its interest rate policy, and consumer sentiment starts to improve. If so, the second half of 2023 could be a big one for the company.