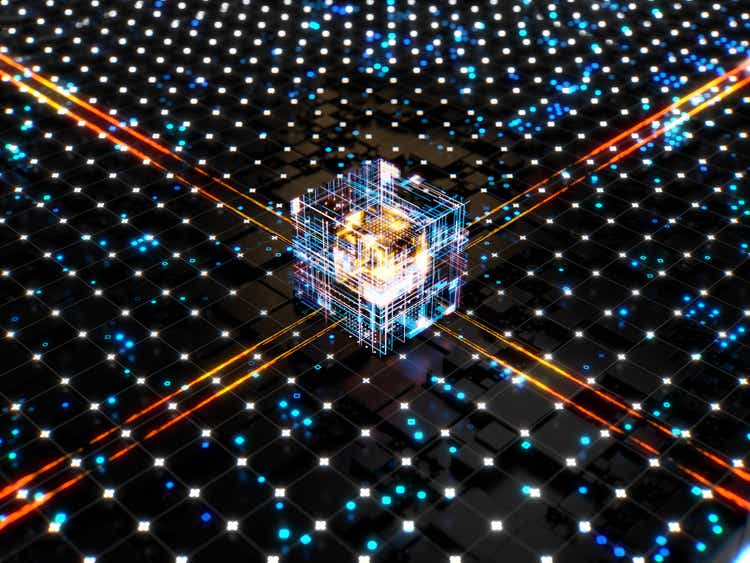 These are unprecedented times with inflation at decades high. There is also uncertainty as to demand while supply chain problems that are persisting as China tries to tame Covid infection rates.

Moreover, with the U.S bent on retaining its superiority for advanced artificial intelligence or AI processors over China and prioritizing onshoring of manufacturing, the industry is unlikely to evolve in the same way as before.

In these circumstances, the aim of this thesis is to show that instead of choosing Micron (NASDAQ:MU) for dip-buying, a better strategy would be to opt for Everspin Technologies (NASDAQ:MRAM) whose details are shown below has delivered a better one-month price performance.

There are chances that you may never have heard of this stock whose market cap is about 500 times less than Micron, but, it certainly deserves your attention, not because of its higher revenue growth or gross profit margins, but more because of its MRAM memory technology which offers some advantages over the DRAM produced by the memory giant.

I will also use some lessons learned from the 1980s when there was a paradigm shift in the semiconductor industry, but, first, I explain what is MRAM which is also Everspin’s ticker.

First, MRAM which is short for Magnetoresistive Random Access Memory uses the movement (rotation) of electrons to transfer data instead of charging them as is the case for conventional memory or DRAMs produced by Micron.

One of the advantages of MRAM is that it allows data to be processed in parallel on the same chip, which makes it faster while also reducing power consumption. It is also non-volatile memory, signifying that the data does not need power or electrical energy to be kept usable, like traditional hard drives and SSDs. This feature confers longer endurance than DRAM memory or NAND flash memory.

In this respect, Everspin, far from being a startup, has more than 12 years of experience producing MRAMs, which are used in data centers and industrial IoT or the Internet of Things as pictured below.

However, MRAM, while rapidly gaining adoption, is not as popular as Micron’s DRAM (or dynamic random access memory) due to its low resistance which prevents it from taking advantage of energy savings in standard electronic circuits. A solution has now been found by researchers at Samsung Electronics (OTCPK:SSNLF) who addressed the problem by designing a new MRAM matrix chip for AI processing purposes.

Without going into too many details, they demonstrated that the MRAM chip can be used for in-memory computing whereby the processing is done within the memory network itself. This is different from the standard computer architecture where data is stored in conventional memory chips like those produced by Micron and with the computing done in separate processor units like those produced by Intel (INTC). Thus, this development opens new areas of application in next-generation AI chips, where MRAM goes to the point of challenging functions that were traditionally done with Micron’s DRAMs.

The Limits of Micron’s DRAM and DDR5

However, Micron continues to innovate, and last year the company surpassed its competitors by developing the most advanced DRAM process technology, named 1α (1-alpha). It offers improvement in performance and energy efficiency, but, 1α was more about manufacturing prowess which enabled faster production and shipping.

Furthermore, as pictured above, the company has been developing its latest generation DDR5 memory modules which offer higher density. This essentially means that in the same server or PC, you can insert four times more memory than for the previous generation DDR4.

However, both as a result of higher inflation and technological changes, the practice of upgrading hardware after every new software version release can no longer be relied upon by suppliers, except during special events like the holiday season. One example is new optimization features in Microsoft’s (MSFT) Windows 11 compared to the earlier Windows 10 version making it possible to run more applications with the same about of memory, implying fewer hardware upgrades.

Coming back to DDR5, its performance (measured as bandwidth) also saw a 36% increase, but there are questions about its latency which according to an article in PC World, has not increased when compared to DDR4.

This latency problem gives rise to memory bottlenecks especially in highly demanding AI applications as it limits the acceleration of data from the processor to memory. Now to circumvent this issue, there is the HBM technique, but this constitutes more of a workaround than a permanent solution. Therefore, with new alternatives like in-memory computing using MRAM now available, DRAM should be replaced by MRAM for the related use cases.

Therefore, in addition to uncertainty about demand, Micron faces headwinds from technology-led developments which are likely to make its chips less attractive compared to MRAM.

Looking further, Everspin is more immune to the woes of the consumer market as its products are used in a wide range of specialized industrial applications as seen below.

Moreover, this is a competitive sector, as, in addition to Samsung, others like Honeywell (HON), Toshiba (OTCPK:TOSYY), and Siemens (OTCPK:SIEGY) have also invested in MRAM. However, some of the most notable advances have come from smaller companies like Everspin which, as a result, now has an IP portfolio consisting of over 650 patents, with some of the companies using them pictured above.

Now, in order to maintain its lead, the company has a relatively high R&D budget, which partly explains lower its EBIT (operating) margins relative to Micron as shown in the table below. On the other hand, its higher gross margins despite not benefiting from a huge revenue base like Micron to spread its fixed costs onto, also point to better production efficiency. For this matter, Everspin has a partnership with U.S.-based Global Foundries (GFS) for manufacturing purposes.

Everspin also has a better return on capital and a better free cash flow margin, but more importantly, given that its revenue growth metric is three times that of Micron, it is abnormal for it to have a lower trailing price to sales multiple of only 1.93x. Consequently, it should be valued better, and adjusting based on Micron’s P/S of 2.13x, I obtain a target of $6.68 ((6.07×2.13)/1.93)). I am also bullish as Everspin has backlogs that can help it to mitigate the effects of a recession, whereas Micron has high inventories.

The $6.9 target is much lower than Wall Street’s target of $9 but is justified due to uncertainty about the pace at which the Fed will raise interest rates. In this respect, higher rates bring tighter monetary conditions in their wake and are particularly detrimental to tech stocks as in such economic conditions, it becomes harder for them to sustain their higher growth rates compared to the more “value” ones.

The current economic situation is somewhat analogous to the late 1970s and the beginning 1980s when Paul Volcker who was Chairman of the Fed at that time, was hiking interest rates aggressively to tame inflation which resulted in a high level of demand destruction. Focusing on the semiconductor industry, after initially rising in 1979 and the first half of 1980, memory prices started to fall rapidly due to overcapacity resulting from industry-wide investment in capacity, in addition to the slump in demand caused by global recession fears. At that time, Intel which was predominantly a memory company and suffered a lot, and was only able to recover thanks to innovation through the development of the i386 processor.

Today, it is Everspin’s innovation that is at the cusp of technological change.

As for Micron, it does not only manufacture memory for PCs, but also for data centers, smartphones, automotive, and industries. It is also the only U.S-based supplier of semiconductor memory and storage after Intel sold its memory unit to SK Hynix in 2020. However, it is not as diversified as Samsung which operates within several industry verticals, and in case there is any brutal fall in demand, it will be difficult to absorb the shocks.

Noteworthily, Everspin does not compete with Micron, who rather faces the likes of Samsung, and S.K. Hynix for DRAM memory whereas, in NAND or flash memory, there are many other competitors. Also, with a market cap of only around 130 million, Everspin does not have the scale to emulate Samsung’s MRAM research, but it can certainly leverage its intellectual property assets.

Continuing on a positive note, the company’s Spin Transfer Torque MRAM (STT-MRAM) is experiencing more demand as it is “questionable whether DRAM will continue to scale and will meet the needs of next-generation systems” like big data and in-memory computing for AI. For this purpose, Everspin’s STT-MRAM business for data center applications has been growing rapidly and represented 19% of revenue in the third quarter of 2022, or a 23% progression compared to the same period last year.

This growth should continue given Everspin’s pole position in the MRAM market which is expected to grow at a CAGR of 32.7% between 2020 and 2027. Recently, it signed a contract with QuickLogic (QUIK) for Department of Defense and space system requirements.

Thus, this thesis has made the case for investing in Everspin based on the superiority of its MRAM. As for Micron, despite its key role to onshore supply chains back on American soil with its $100 billion New York factory, it is better to avoid buying the dip not only because of slumping demand but also because of high inflation and technological evolution putting into question the normal DRAM upgrade cycles.

Finally, while we tend to focus on demand and inventories, it is more a combination of factors driven by technology that trigger paradigm shifts in the semiconductor industry. This said Everspin does not have Micron’s financial clout and manufacturing prowess, but, its MRAM is certainly appealing, and, at around $6, the stock is a buy. Adding a note of caution, in the short to medium-term tech stocks should continually be impacted by volatility.