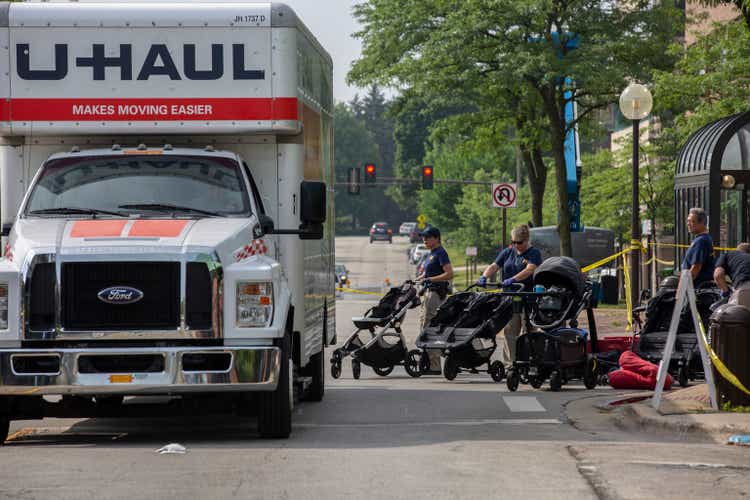 After seeing shares of a company skyrocket higher, it can be awfully tempting to want to sell those shares and move on. But just because a stock has moved higher does not mean that shares are necessarily at the point where it makes sense to sell. A great example of this can be seen by looking at AMERCO (NASDAQ:UHAL) (NASDAQ:UHALB), the company that owns the very well-known U-Haul International brand name that centers around renting out trucks, trailers, self-storage units, and other equipment and offerings, to customers in the regions in which it operates. Over the past few months, shares of the company have soared higher even as fundamental performance remains next. Sales keep climbing but profits and cash flows have taken a slight step back. Ultimately, I have faith in the company from an operational perspective and I view the recent profit issues as short-term in nature. Add on top of this the fact that shares of the company still look quite cheap, and I would make the case that it makes still for a solid ‘buy’.

A great ride from AMERCO so far

The last time I wrote an article about AMERCO was back in early July of this year. In that article, I lauded the company’s continued growth for both its top and bottom lines. At that time, the broader market was punishing shareholders, but I still maintained that even a downturn would be weathered by the company well because of how affordable shares locked. These factors and more led me to conclude that the fundamental strength of the company still made it a promising opportunity, with the end result being a reiteration of my ‘buy’ rating on the firm to reflect my belief that it should outperform the broader market for the foreseeable future. So far, that call has worked out remarkably well. While the S&P 500 is up by just 6.5%, shares of AMERCO have generated upside of 39.7%.

To understand exactly why this upside has occurred, we need only look at the most recent results provided by the company. When I last wrote about the company, we had data covering through its 2022 fiscal year. But today, that date on our extends through the first half of the 2023 fiscal year. During this two-quarter window, sales of the company came in at $3.30 billion. This is 5.2% higher than the $3.14 billion the company reported the same time last year. This increase in sales came as a result of strength across most of the company’s business activities. For instance, self-moving equipment rentals revenue grew from $2.21 billion to $2.25 billion, driven by increased volume and higher revenue per transaction. Self-storage revenue, meanwhile, jumped from $290.88 million to $358.76 million. This increase was due to a mixture of items, such as occupancy gains at existing locations, the addition of new capacity to the company’s portfolio, and higher revenue per occupied foot. During this window of time, the company added 5.4 million net rentable square feet to its portfolio, with 2.2 million of that square foot occurring during the first six months of the 2023 fiscal year. Other portions of the company also grew, such as its self-moving and self-storage products and services, property management fees, and more.

As revenue rose, you would expect profitability to rise as well. Sadly, that was not the case. Net income for the company fell from $755.1 million in the first half of 2022 to $686 million the same time this year. Even though revenue increased nicely, the company suffered from some setbacks. For instance, operating costs under its Moving and Storage operations grew year over year, while repair costs associated with the company’s rental fleet also increased. On the repair side of things, management did engage in additional preventative maintenance that should save money in the long run but that will ultimately cost shareholders in the near term. Other profitability metrics followed a similar trajectory. Operating cash flow fell from $1.52 billion to $1.19 billion. If we adjust for changes in working capital, it still would have fallen, declining from $1.21 billion to just under $1.10 billion.

Even if we just zero in on the second quarter alone, the picture looks remarkably similar. Revenue rose from $1.66 billion in the second quarter of last year to $1.70 billion the same time this year. At the same time, however, net income dropped from $409.9 million to $352 million. We also saw operating cash flow take a beating, falling from $724.8 million to $536.6 million. Even if we adjust for change isn’t working capital, it would have gone from $634.8 million to $551.9 million. Another profitability metric that showed a bit of weakening year over year was EBITDA. Driven by the same factors that impacted net income, EBITDA shrank from $750.8 million to $705.3 million.

Truth be told, we don’t currently know what to expect for the 2023 fiscal year in its entirety. If we simply annualize results experienced so far, then we could anticipate net income of $1.02 billion, adjusted operating cash flow of $1.76 billion, and EBITDA of $2.33 billion. Given these numbers, the company is trading at a forward price to earnings multiple of 11.2, at a forward price to adjusted operating cash flow multiple of 6.5, and at a forward EV to EBITDA multiple of 6.3. As you can see in the chart above, these numbers are marginally higher than when I last wrote about the firm. Also as part of my analysis, I also compared the company to three similar businesses. On a price-to-earnings basis, these companies ranged from a low of 6.8 to a high of 9.6. And when it comes to the EV to EBITDA approach, the range was from 5.5 to 6.2. In both cases, AMERCO was the highest of the group. Meanwhile, using the price to operating cash flow approach, the range was from 2.5 to 17.9. And in this scenario, only one of the five companies was cheaper than our target.

At this point in time, I find AMERCO to be an interesting company that should continue to deliver returns for shareholders. Having said that, the big question that investors need to ask themselves is whether or not the company still makes sense after rising such an extreme amount. It may be tempting to sell out now and take your gains. That would certainly be the safest route, especially at a time when the broader market is worried. But given how cheap shares are at this moment, I do believe that further upside potential is warranted. Any upside could be encouraged further by the fact that, next month, the company will be moving to the New York Stock Exchange as opposed to the NASDAQ it is currently on, a move that could increase its appeal to a broader pool of investors. This all has led me to keep the ‘buy’ rating I had on the stock previously, reflecting my belief now that shares should continue to outperform the broader market moving forward.