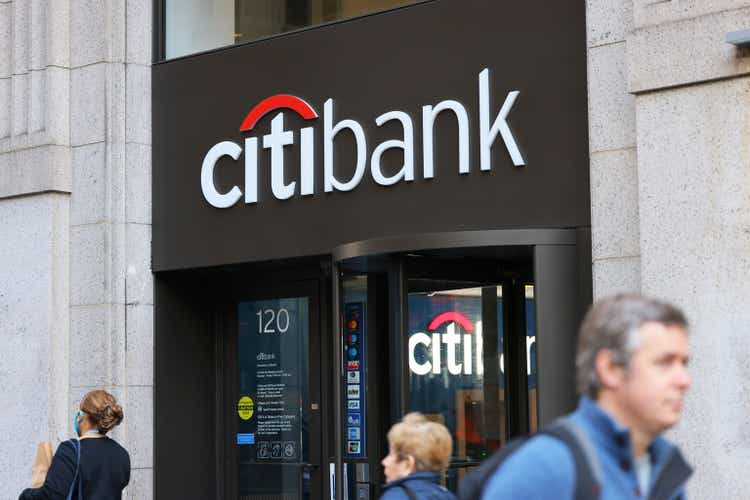 Citigroup (NYSE:C) reported its Q4’2022 earnings before the market opened on Friday the 13th of January. Like many other investors, I was keenly looking out for the reported common equity tier 1 (“CET1”) number. Like many investors in Citi, I have been patiently waiting for the share buyback program to resume.

As readers of my previous article would be aware, Citi needed to get to a CET1 ratio of 13% before it could (prudently) restart share buybacks. The 13% CET1 target was projected to be reached by Q2’2023, so I was pleasantly surprised to see that Citi has already reached that number in the current quarter.

I was expecting Citi to announce that it will be resuming buybacks and for the share price to pop….but then I remembered the upcoming disposal of Citi Banamex Mexico consumer bank and its accounting impact! (more on that later)

Needless to say, Jane confirmed in the earnings call that buybacks are not going to restart in the quarter despite Citi achieving its 13% milestone early and attributed it to the disposal of the Mexico operations.

Clearly, the market is frustrated by the apparent lack of urgency by Citi management on buybacks. This was clearly articulated in the earnings call by Wells Fargo Securities senior banking analyst Mike Mayo:

Your CET1 ratio is 13% now. And I think that’s two quarters earlier than consensus had expected. You said it was up 70 basis points. So doesn’t that allow you to repurchase stock now? Or I understand that if you go ahead and sell Banamex, that could have a temporary negative capital hit. So I’m just thinking like don’t sell Banamex, don’t have that temporary capital hit, start buying back stock at a fraction of your tangible book value. So what’s wrong with my logic or what part of that can you comment on?

That was a somewhat frustrated (some may argue flippant) comment from Mike Mayo who was a strong proponent for disposing of Citi Banamex as early as 2015.

Why is it so important for Citi to buy back stocks now?

Citi is currently trading at ~0.6x tangible book value and is targeting RoTCE of ~11-12% in the medium term (2024-2026). So by 2024, Citi should be delivering somewhere in the vicinity of $10 EPS (at the lower end of guidance). Saying it differently, the share price at $50 is like buying a dollar for 50 cents now. Naturally, investors are anxious for management to restart the share buyback program. Needless to state, buybacks at these levels are exceptionally accretive to tangible book value as well, so the upside is simply enticing.

Citigroup’s management team is clearly not oblivious to the maths either:

Yes. Mike, I have to tell you that I am surprised that you are asking about Mexico, just given our history together, but I understand it. And what I would say is that a couple of things. One, we clearly see where we trade, right. And we are not happy about where we trade. And we think our strategy warrants us trading better than where we trade today. So, if we could buy back, right, we could do buybacks as soon as we are able to do buybacks, we will, right. I mean that is part of the way we deliver value for our shareholders.

It is the upcoming disposal of Citi Banamex which is at an advanced stage and is expected to contract in Q1’2023. The problem is that signing the dotted line creates a significant capital hit which is temporary, so it is merely an accounting timing difference that unfortunately flows to the calculation of CET1. The next paragraph is somewhat technical, so feel free to believe me and skip this section.

Citi Banamex is recorded as Held-For-Sale (“HFS”) and thus on the contract date (disposal), Citi is forced to recognize an FX accounting loss, even though that loss has already been reflected in its equity line as AOCI. On completion, this FX loss is reversed out of AOCI and thus flows as a benefit to CET1. In short, this is a temporary capital hit that reverses on completion. Now, given the book value of Citi Banamex, this temporary hit to CET1 is likely to be in the billions (Citi does not disclose the exact amount).

The Capital Path Ahead

As covered in my prior article, by the 2nd half of 2023, Citi is likely to find itself with significant excess capital due to a number of factors:

1) The Fed’s CCAR stress tests are likely to result in a lower target CET1 ratio (more on that later).

2) Capital release from disposals including an estimated ~$7 billion from the sale of Citi Banamex.

3) Reversal of the temporary impact of rising rates on Citi’s liquidity portfolio (AOCI).

Clearly, the Fed’s stress tests are exceptionally important. My base case is that Citi’s CET1 target will reduce to at least 12.5% in the June 2023 CCAR cycle.

Interestingly, as I predicted in my recent article, Citi has prepared the balance sheet with a view to optimizing CCAR stress tests. As readers may be aware, CCAR is based on the 31st December 2022 balance sheet, and therefore Citi appears to have derisked in Q4 by reducing RWA in the investment bank as well as absorbing $700 million of additional loan loss provisions in the consumer bank. I am sure Citi has proactively taken many other actions, that are not necessarily visible to investors, to optimize for CCAR, for example, reducing net counterparty risk in the investment bank.

The resumption of the share buyback program is delayed and investors are rightly disappointed. The light at the end of the tunnel is that by 2H2023, Citi will find itself with a ton of excess capital. If the price still remains at ~$50 or lower, this is going to be a very accretive proposition. There is also an outside chance that buybacks will resume as early as the quarter as well. Citi indicated they will make these decisions quarter by quarter.

Aside from buybacks, the underlying performance of the firm is very strong powered by Services and market share gains in FICC. Naturally, investment banking and wealth management are not doing as well given the macro headwinds but nonetheless, underlying metrics suggest growth should resume once markets normalize.

Citi is looking like an exceptionally attractive risk/reward opportunity amongst the large U.S. banks – I remain very bullish.