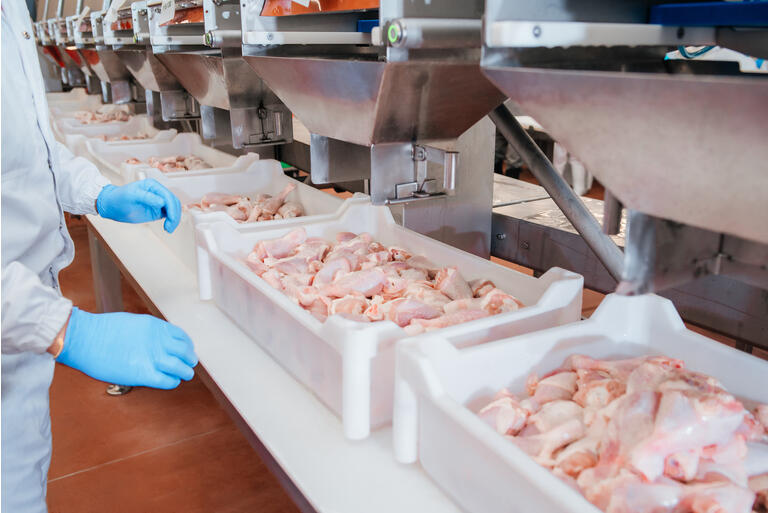 Industrias Bachoco (NYSE:IBA) is a Mexican company vertically integrated around production and commercialization of poultry and eggs in Mexico and the US. The company is also slowly growing its other lines of business in order to become a multi-protein producer.

Our thesis is that Bachoco’s operations are consistently profitable, that its financial position is very strong, and that the company seems to have a conservative management that will not pursue growth without caution. In that scenario, and trading below 10 times earnings, we think Bachoco may be a good buy and hold opportunity.

Note: Unless otherwise stated, all information below has been obtained from IBA’s filings with the SEC and IBA’s investor relations website.

Bachoco was founded in the 1950s but started growing in the 1980s first by consolidation, and after the 1990s by expansion to the US. IBA has been a publicly traded company since 1997 in Mexico and the US.

Bachoco derives 90% of its revenue from poultry and eggs. Of these, approximately 30% comes from the US.

In Mexico, Bachoco concentrates on fresh chicken, which represents 90% of Mexican consumption. Fresh chicken is slaughtered and eviscerated chicken without much additional processing. However, 70% of Bachoco’s chicken sales in Mexico are packaged, which means the company creates some sort of brand equity.

On the other hand, in the US Bachoco adds value through further processing of the chicken, either selling it in parts or seasoned, etc. The US also serves as a center to sell to exporters and trading companies, and as a direct source of corn, sorghum and soybean.

The reader should consider that Mexico and the US form a free, relatively integrated market, and that Bachoco makes use of that association. For example, Mexico is a net importer of chicken, while the US is a net exporter. The US is also one of the major exporters of soybean and corn, two of Bachoco’s key inputs.

In Mexico, Bachoco also sells eggs, accounting for 5% of the country’s production. The company is pushing towards selling packaged eggs, given that these carry more brand equity and are less sensitive to price changes.

Bachoco understands that both chicken and eggs are commodities, and that therefore the company has little pricing power. To counteract this reality, Bachoco has pursued three strategies: trying to sell packaged products, with less price variance, and with more brand equity; setting an extensive distribution network in Mexico to benefit from local surpluses and shortages; optimizing operations to obtain benefit through cost reduction.

Bachoco also has plans for expanding to other segments, particularly swine and balanced food for pets. These segments cumulatively still represent less than 10% of Bachoco’s revenues but management believes that it can expand to up to 20%.

Bachoco’s growth plans are optimistic but conservative. The reason is that management understands that commodity industries operate under cycles of surpluses and deficits of production. Management does not want to be caught investing heavily in the upper section of the cycle.

Therefore, Bachoco seeks to grow at a regular rate of 6% yearly, through market expansion, especially in Mexico where per capita consumption is still lower relative to developed markets, and small and well-thought acquisitions.

For example, the company recently bought 50% of Sonora Agropecuaria, a swine producer in Mexico. Sonora’s operations were not efficient, and therefore Bachoco paid a price below book value for the assets it acquired.

Another example is the slow growth in headcount of only 3% yearly.

For a conservative investor, no growth prospects or fantastic business model is sufficient if price is too high in comparison to current and historical income trends.

Fortunately, in this aspect Bachoco is priced below 10 times earnings, and below 7 times earnings considering what has been published for 2021 so far. For the last 10 years, Bachoco’s earnings have been above $150 million, with several years above $200 and $250 million. This for a company with a market cap of $2.1 billion.

Revenues have grown consistently during the period, from $2 billion in 2011 to $3.5 billion in 2020. Management expects that the company can reach $5 billion in revenues before 2025. A similar trend can be seen in earnings, although with more variation given that margins expanded up to 2015 to later return to 6%.

Cash flows have also grown, from $175 million operating cash flow in 2012 to $300 million in 2020. The company currently has regular capex expenditures of $100 million a year. The rest has been paid in regular dividends of $40 million a year and accumulated on a pile of cash (more on this later).

We believe that although these growth figures are not fantastic, they take a different color when considering that the Mexican economy has not grown that much in the last lustrum.

The same can be said about poultry production. According to the World Bank, livestock production in Mexico has grown 12% between 2013 and 2018, while Bachoco’s poultry volume grew 22% in the same period. 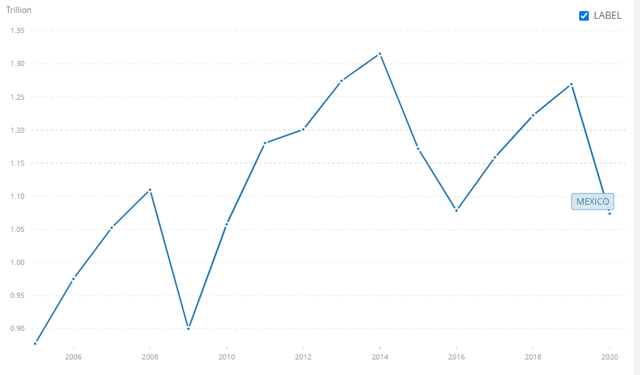 In a commodity industry where returns on assets are low and operating margins are thin (6% in the case of Bachoco), debt can be the difference between profitability and expansion, and demise.

The reason is that assets have a really hard time paying the cost of debt when the industry enters the downward side of a cycle. Low profitability destroys investment, puts more downward pressure on operating margins, and inserts the company in a difficult to leave cycle of debt and capital investments.

Sometimes these debt traps are initiated by a management team just too eager to catch the opportunities that seem to abound on the upward side of a cycle. Capital markets are eager to lend to industries in a good cycle, and management may want to start acquiring or investing. When the cycle tide turns, these acquisitions and investments prove incapable of repaying their own capital.

That is why Bachoco’s tremendously strong balance sheet is such a good signal. First that the company will not suffer from chronic under profitability, and second, that the company’s management is conservative.

According to data from the third quarter of 2021, Bachoco currently holds $1 billion in cash equivalents against only $88 million in financial debt and $300 million in accounts payable. That means that the company’s enterprise value is even lower than its market cap. Paying $2.1 billion to acquire Bachoco, the investor could theoretically retire $1 billion in cash without the company suffering too much.

Bachoco has kept this pile of cash since 2014. Our understanding is that the company is waiting for a downturn cycle in the industry to do some profitable acquisition.

Bachoco is owned by its founder family, the Robinson Bours family, holding 75% of the stock through two trusts. The company has a single class of share with homogeneous rights. Less than 25% of the company’s shares are float, and from these only half trade in the US. This is advantageous for the conservative investor.

First, with low float, the stock has low volume, 9 thousand shares on average in the NYSE, and 30 thousand equivalents in the Mexican stock exchange. Lower volume means lower coverage and interest, therefore more chances for the investor to have an informational edge.

Second, when a company has a strong stockholder and especially when it is the founder or founder family, the minority stockholder may be more protected from the extravagances of management. That is, there is someone with significant skin in the game to protect the interests of the stockholders in general. It is true, however, that strong control may derive in personal benefit for the majority stockholder.

We also consider that Bachoco’s management transmits an idea of conservativeness, both from its speech and deeds. Through deeds, by not accumulating debts, sustaining margins and waiting to make profitable acquisitions.

Through speech, by the general sentiment we have gotten from their comments. For example, in an interview, Bachoco’s CFO, Daniel Salazar (in Spanish on YouTube), transmitted conservativeness regarding growth prospects, and commented that the company seeks to keep the cash in order to burst growth only when it is convenient. Also, Bachoco does not plan to take much debt, with a ceiling on 2.5x EBITDA (approximately $500 million).

Salazar was sincere about his views of growth. For example, he commented that the company does not expect significant growth in the US market, or that the new business lines (like swines and balanced food) will take time to reach 20% of revenue. He spoke freely about some of the company’s trade-offs, like owning production or buying from third parties. expansion and the business cycle, etc.

We believe that this is a good signal, because in our opinion, most CFOs are ultra-bullish when talking about their companies and seem ready to say anything to lure investors in, even when what they say is contradictory.

Bachoco’s operations are profitable, its financial position is very strong by design and management transmits sufficient confidence about its conservativeness.

With these in mind, and the stock trading below 10 times current earnings, we think it can be an interesting opportunity to buy and hold, examining future growth prospects.