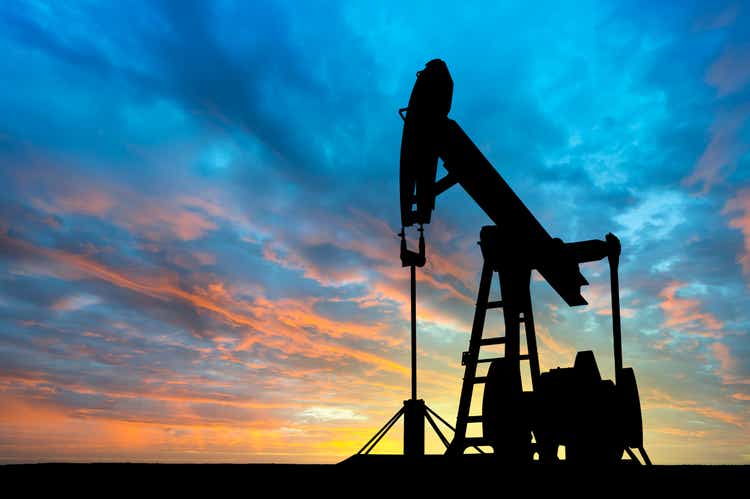 Laredo Petroleum (NYSE:LPI) is a small oil and gas company with operations solely in the Midland sub-basin of the vast Permian field. After persevering through low demand and poor hydrocarbon economics of 2020 and early 2021, it is benefiting from higher oil and gas prices, laser-focused operations, and a needed strategy of reorienting from the gassier, less-economic region of the sub-basin to an oilier, more economic region.

While this is not a stock for dividend-hunters, I recommend Laredo Petroleum as a speculative buy to those seeking capital appreciation based on expectations of future oil and gas prices, and more particularly for the company’s strategic improvement.

I am considering buying shares.

The Russian invasion of Ukraine and the sanctions against Russia — explicit and implicit — have upended the global oil and gas markets. Prior to the invasion, Russia produced about 10% of the world’s oil, and exported 5 million barrels per day (BPD) of crude and 3 million BPD of crude products. Moreover, Russian gas exports supplied about 40% of Europe’s natural gas in 2021.

For comparison, the US produces 11.7 million BPD of oil and uses 18.2 million BPD. Last week we produced 99.6 billion cubic feet/day (BCF/D) of natural gas and prepared to export 17.6 BCF/D. About a quarter of the exports were by pipeline to Mexico and the remainder were deliveries to LNG terminals for export to Europe and Asia.

Oil and gas pricing crosscurrents include:

Housley Carr at RBN Energy summarizes the mechanics of the SPR drawdown and points to a benefit. [My note: If holding the oil in the reserve is assigned no above-market value for its energy security function…] the sale of the oil could net $12-$13 billion in profit to the federal government, given the oil’s prior average $30/bbl purchase price and assuming a $100/bbl sale price.

CEO Jason Pigott noted the company had closed two acquisitions that expanded Laredo’s oil-weighted leasehold in Howard and western Glasscock counties (both in the Midland sub-basin.)

For 1Q22, Laredo expects total production of about 84,000 BOE/D, of which about 41,000 BPD is oil. For the full year of 2022, it expects to deliver more than $300 million in free cash flow at $80/bbl WTI oil and $4.65/MMBTU Henry Hub gas prices. It also expects to achieve deleveraging targets six months ahead of schedule, which would result in getting to a 1.5x net debt/adjusted EBITDA by 3Q22.

US Oil and Natural Gas Prices and Oil Production

NYMEX strip prices for future months are similarly high but backwardated (lower) for oil and relatively flat for natural gas. Gas prices have stayed high in part due to large draws from the US of liquefied natural gas to Europe and Asia.

The graphs below show the EIA’s oil supply-demand balance and the current 10-90 confidence interval around future oil prices.

Some hedges extend into 2023 but at much smaller volumes and higher floors.

According to Laredo’s 10-K, at December 31, 2021, it had an estimated 318.6 million BOE of proved reserves, of which 73% were proved developed. During 2021, the company sold natural gas reserves and bought oil reserves, so its oil percentage of reserves is now 48%. The SEC PV-10 value of proved reserves was $3.7 billion, using SEC benchmark prices of $63.04/barrel for oil and $3.35/MMBTU for natural gas.

After stabilizing in 2021, Laredo’s strategy has transitioned towards oilier reserves and production. The company sold gas-weighted acreage in Glasscock and Reagan counties and acquired an oil-weighted 41,000 net acres in Howard and western Glasscock counties.

Laredo plans 2022 capital expenditures of $520 million, including using three rigs and two completion crews in 1Q22, then two rigs and one completion crew for the rest of the year. Projects are entirely on its Howard County inventory. Overall, Laredo has 166,000 net acres and 8 years of drilling inventory.

Laredo Petroleum is headquartered in Tulsa, Oklahoma. As a Midland sub-basin producer, it competes with all Permian producers, e.g. most US shale companies. A few competitors in the Midland sub-basin are Earthstone Energy (ESTE), Diamondback Energy (FANG), and Occidental (OXY). Laredo also has significant competition from private companies.

Competition extends from hiring executives and professionals, to competing for service contractors, equipment, and takeaway capacity, to selling oil, NGLs, and natural gas.

Beta (stock volatility relative to the market) is an extraordinarily high 3.89.

Laredo’s trailing twelve months’ earnings per share (EPS) is $10.03, giving it a trailing price-earnings ratio of a modest (attractive) 8.4. The average of analysts’ predicted full-year 2022 EPS is $25.48 for a bargain forward price/earnings ratio of 3.3.

Laredo Petroleum does not pay a dividend.

The average analyst rating is 2.4, or between “buy” and “hold” from 23 analysts.

BlackRock, State Street, and Vanguard are signatories to the Glasgow Financial Alliance for Net Zero, a group that manages $57 trillion in assets worldwide and which advocates limiting hydrocarbon investment. They are far from alone in this stance. In addition to Biden administration roadblocks to domestic energy production, in December 2021 the Biden administration ordered the US to stop financing what it calls carbon-intense projects abroad.

Laredo’s book value per share of $30.72 is less than half its market price, implying positive investor sentiment.

The company’s enterprise value is $2.8 billion and the SEC PV-10 value of its reserves is $3.7 billion.

The ratio of enterprise value to EBITDA leans toward a bargain at 7.0 (less than maximum 10.0) and the ratio of net long-term debt to EBITDA is 3.4.

Market capitalization to production is cheap at $17,100/flowing BOE and $35,600/flowing barrel of oil.

Inflation, while it can raise the price of oil since oil is mainly denominated in dollars (although Russia is asking for payments in rubles), also increases operating and financing costs. Completion crews, for example, are much harder to find. The current level of inflation is at a decades-high level.

Other risks are political and regulatory — particularly with the Biden administration, banks, and several states taking a race-to-zero-hydrocarbons posture, keen to increase production costs in the near term and eliminate US oil and gas production in the long term.

I recommend Laredo Petroleum to investors interested in capital appreciation from a Midland sub-basin oil and gas producer. This is a speculative buy since the company has considerable debt, some high-priced.

I do not recommend Laredo Petroleum to dividend hunters since it doesn’t pay a dividend. The company’s first priority is to pay down debt.

Forward curves for oil and gas look healthy and Laredo has pivoted toward increasing the oil in its mix, reflected in its $3.7 billion SEC PV-10 reserve value.

EnCap remains a substantial owner of the equity and so will have significant operating say. The company has a nosebleed ratio of debt to market capitalization at 99%.

Laredo’s large hedge program isn’t smothering. It has a bargain forward price/earnings ratio, good acreage, and a restrained capital program. It expects $300 million of free cash flow in 2022 and to achieve its deleveraging targets ahead of schedule.

Deere: Underperforming The Market Is The Most Likely Scenario Ahead
Don’t Chase After the Latest Surge in Nio Stock
7 Top Metaverse Stocks with Massive Potential
Legal Problems Could Push Teladoc Health Stock to New Lows
Cenovus: Buy The Dip