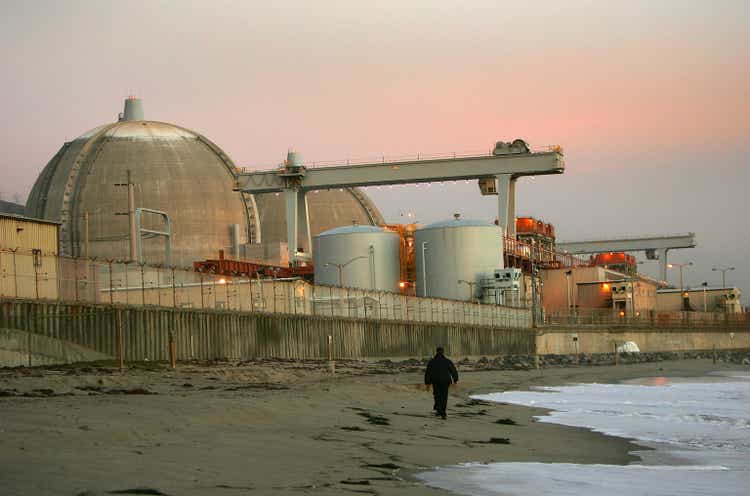 Denison Mines Corp. (NYSE:DNN) is a Canadian Uranium mining and refining company that has quietly developed infrastructure and assets in one of the highest-quality uranium deposits in the world. With 22.5% ownership of one of the largest uranium mills and plans for over 15 million lbs of production annually by the end of the decade, Dennison’s phase of exploration and development may pay dividends in the years ahead.

Public opinion of nuclear energy is slowly changing towards the positive, especially as the dire need to reduce CO2 emissions suppresses worries about radioactive waste and disasters. With numerous entities working around the clock to develop safer, more efficient, and sustainable nuclear reactors, there is plenty of evidence to show that nuclear energy will begin to increase in electricity production market share. As such, it is important to consider mining companies as the necessary providers of the important fuel for these reactors.

Nuclear energy has quietly been producing energy in the background of the US electrical grid for decades, but new projects have been few and far between. Many high-profile shutdowns, such as those in California, along with much debate about the environmental risks of nuclear waste have inhibited any significant growth of this clean energy source. Not to mention recent events such as Fukushima Daiichi or the Yucca Mountain storage site debate that continue to hinder support for the industry. However, recent polls show that the majority of energy policies at the state level believe that nuclear power is necessary or should be used to replace fossil fuels:

An Associated Press survey of the energy policies in all 50 states and the District of Columbia found that a strong majority— about two-thirds— say nuclear, in one fashion or another, will help take the place of fossil fuels. The momentum building behind nuclear power could lead to the first expansion of nuclear reactor construction in the U.S. in more than three decades.

Additionally, recent fiscal spending in support of nuclear power has increased in recent years, including a record 23% year-over-year increase slated for 2022 in the U.S. Europe is an interesting point of consideration, especially as the grid system largely remains nationalized and ruled by local regulations. The region is considering an EU-based system that supports further expansion of nuclear power, but the outlook is cloudy at best. Most look towards developing nations as the bearers of nuclear growth, and, with that, 30 countries now have plans to develop nuclear power generation in the future.

Uranium mining is an important part of the nuclear ecosystem, and due to limited growth in nuclear operations, has seen limited expansion beyond pre-Chernobyl locations. Additionally, the industry is heavily contract-based, leading to supply issues if unforeseen demand exists. As a result, I find that a company such as Denison which is increasing production capability has the most to win. Unfortunately, demand is hard to determine at the moment, and for the U.S. is falling long term. With that, uranium prices have also fallen over the past decade and this has been a major source of lagging revenues for most uranium miners.

*Please note that trading prices are now exceeding $60 per lb, but this may take some time to be reflected by producers and customers due to long-term contracts.

One major consideration for the growth of the uranium mining industry is the way to obtain the ores. Open Pit mining is typically not utilized for uranium mining in the Athabasca basin, and most current operations use Underground mining (UG). This is due to the fact that the ore deposits are typically more than 400 ft below ground. This method is also favorable due to the smaller waste and surface footprint, an increased safety profile thanks to modern technologies.

However, the problem with UG is that the ores must be refined via milling, a very expensive process during and after the mine’s production life. As such, UG produced Uranium offers lower profit margins than the new In-Situ Recovery (ISR) method.

ISR contrasts with UG mining due to the fact that, once operational, it is far cheaper and environmentally friendly (less surface and underground impact, and more regulation in regards to waste water) by using an oxidized water solution to dissolve the uranium out of the deposit. Typically, little chemicals are needed to be sent underground to extract the ores, just dilute sodium bicarbonate and gaseous oxygen (in the U.S., not Australia or Kazakhstan with lax regulations). Not needing to send miners or assets underground to toil away at the rock is an enticing and profitable strategy, but is yet unproven in Canada or tundra regions. As such, there is a risk that the process may not be comparable to the low margins seen in Canada or Australia.

The economic advantages of ISR include:

Denison currently has plans to develop two ISR mines in the region, and expects costs to be significantly cheaper than local UG mines (although NexGen Energy (NXE) claims their upcoming Arrow mine to be quite cost effective). Cameco (CCJ) also operates some cheap-to-run UG facilities in the basin that may remain competitive (McArthur lake has been inoperable since 2018 but is slated to be back online within the next few years after upgrades). The challenge that ISR processes seems to face is that new techniques in UG mining allow for cost competitiveness, so the benefits may lie in initial and post-operational CAPEX benefits. Due to the fact that many of these costs fluctuate and are speculative, expectations will need to be adjusted once operations commence.

Denison can be best described as a holding company of various exploration and strategic mining assets within the Athabasca Basin. This basin is the source of 20% of the world’s uranium and offers some of the highest quality ores. While they do own portions of commercial operations, the majority of the company’s value lies in the future potential of its holdings. Below, I will discuss the potential and capabilities of each major segment in order of ownership stake.

Along with these assets discussed above, DNN also owns significant quantities of stored ores, joint ventures, and Uranium securities for liquidity to support development costs. Along with the increased price of Uranium through 2021, the company was able to increase revenues and profitability for the full year. Total revenues reached $20 million across the board, while net income reached $19 million (thanks to various sales of assets). The company maintains high exploration, evaluation, and operating expenses, but as discussed, these are set to develop significant revenues with the various projects in the works.

COVID had big impacts on the company as multiple mills and mines closed for parts of 2020 and 2021, as this is why revenues remain low. The small Closed Mine segment (remediation projects, etc.) offers background revenues, but are often volatile and hard to lock down to an average. Lastly, the company has plenty of cash and liquidity to support growth, so it is hard to expect significant dilution for at least 2-3 years or so.

Denison-specific risks revolve around the fact that it is predominantly banking on its exploration assets, or ones that are not yet operating. As such, one must consider any news about delays, increased costs, or lower profitability as expected, and lower output to be major influences to the short-term share price. More risk averse investors may consider ETFs or larger companies within the uranium mining or nuclear energy industry as better options. Denison is suited more for those with an extremely long ~10 year or more outlook and suitable risk tolerance. However, thanks to significantly increased uranium and energy prices, I find that NPV and IRR estimations will be quick to update and provide higher valuations to DNN and other exploratory names.

Additionally, the company’s current valuation is unlikely to offer a significant discount to the average NPI estimation provided by the company. While growth will be supported by the future cash flows and investments that are unknown, investors at the current levels may find volatility over the next few years. As such, I find that it is far easier to just wait a few years and reevaluate the company rather than stress out over uranium prices. Although, if any meaningful reductions in value due to delays or increased costs occur, I will take another look and consider a position.

Do not forget that nuclear is already all around us and maintains a stable position for industry participants. While the potential for increased growth exists, there are certainly plenty of risks to consider as well.

However, I find Denison to be well placed to leverage both existing and future demand potential. If major industry catalysts occur, then Denison should benefit. The demand and need is there.

Nuclear power already provides about 20% of electricity in the U.S., accounting for about half the nation’s carbon-free energy. Most of the 93 reactors operating in the country are east of the Mississippi River.

“They’ll be times when the wind doesn’t blow and the sun doesn’t shine,” [former U.S. Energy Secretary Steven Chu] said. “And we will need some power that we can actually turn on and dispatch at will. That leaves two choices: either fossil fuel or nuclear.”

“We have to incorporate nuclear energy in a way that acknowledges it’s not risk-free,” [Jason Bordoff, co-founding dean of the Columbia Climate School] said. “But the risks of falling short of our climate goals exceed the risks of including nuclear energy as part of the zero carbon energy mix.”

This considerate, measured, and effective strategy of maintaining a wide range of sustainable energy sources is key. As Denison’s production capacity increases over the next few years, investors will likely see capital gains at a significant clip. The McClean Lake asset will also provide background revenues to support operations to a certain extent, but I expect net losses will remain. While I will delay my analysis of future return potentials for another date, I believe you should begin pursuing your own conclusions. I hope this article has started that process for you.

Thanks for reading, and let me know your thoughts on a nuclear renaissance below.

7 Meme Coins to Avoid no Matter What Your Friends Say
Cenovus: Buy The Dip
Nvidia Stock Is Down, But Still Expensive
7 Stocks to Buy Now to Beat Inflation
Gamestop Won’t Make You Rich Here, But It Could Break You