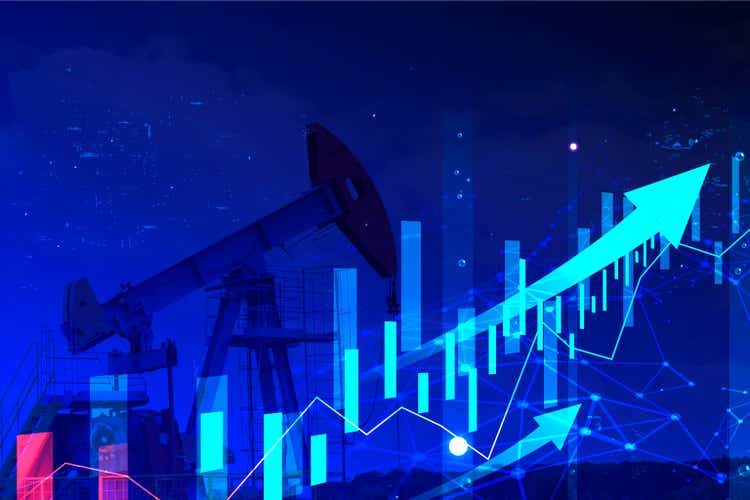 Ovintiv Inc. (NYSE:OVV) is not only trading undervalued as compared to other peers, the company also expects positive free cash flow and debt reductions. In my view, if OVV continues to be a leader in horizontal drilling, and drilling increases as promised by management, free cash flow will likely remain positive. I obviously see risks from incorrect assessment of reserves and future capital expenditures. However, the current price mark is too low, and does not correctly represent future earnings. I believe that a small position in the stock could be beneficial even for conservative individuals.

In my view, the most relevant about Ovintiv’s reserves is not only that they grew in 2021, but also that management reports a 269% reserve replacement ratio. It means that management is successfully finding or acquiring new reserves, so that future production will most likely continue:

With that, the most interesting thing about Ovintiv Inc. right now is the guidance given for the year 2022. Management expects 9% to 25% drilling increase in 2022, and successful longer lateral development:

With the previous developments in mind, the beneficial numbers given for the year 2022 make a lot of sense. The company does not only expect 2022 free cash flow of $2.9 billion, but also net debt of only $3 billion, which is significantly lower than the current figure. In my view, more free cash flow and less net debt will likely push the share price up:

Conservative Sales Growth Would Imply A Stock Price Of $92

In my view, if Ovintiv continues to be a leader in horizontal drilling, and invests sufficiently in innovative technology, management will likely report positive free cash flow. Let’s note here that investing in new innovations to sustain free cash flow margins is among Ovintiv’s strategic goals:

I also believe that the company is doing very well by monitoring very close ESG performance. In particular, if management respects environmental regulations, new laws from governments affecting the oil and gas industry will likely not affect Ovintiv that much:

Under conservative sales assumptions, I believe that revenue growth could decline slightly from $9 billion in 2024 to $8.1 billion in 2027. In my view, an EBITDA margin of 51%-49% appears reasonable, and it is related to previous figures reported by Ovintiv Inc. With an effective tax of 21% and capital expenditures/sales close to 17%, the free cash flow will likely decline from $2.54 billion in 2022 to $2 billion in 2027.

I also included an EBITDA multiple of 7x, which is approximately what, Seeking Alpha says, is the median for Ovintiv’s industry. Adjusting with debt of $5.7 billion, I obtained a market capitalization of $23.6 billion, which implied a fair price of $92:

My Capital Asset Pricing Model is not far from that of other investment advisors. I assumed cost of equity around 6%-10%, cost of debt of 4%-7%, and a weighted average cost of capital of 7%:

Increase In Taxes For Oil Corporations, A Drastic Decline In The Oil Price, And An Eventual Increase In The Cost Of Debt Could Lead To An Implied Price Of $25

Among the risks for investors in Ovintiv, the most relevant is a failure in the calculation of the proven reserves. If engineers overestimate the total amount of proven reserves, when Ovintiv launches production drilling, future revenue may be lower than expected. If journalists notice that the estimated revenue was significantly higher than realized sales, the stock price will likely decline. Ovintiv Inc. may also underestimate necessary operating expenses of capital expenditures, which would lead to less free cash flow than expected:

The estimates of proved reserves included in this Annual Report on Form 10-K are prepared in accordance with SEC regulations. Subject to limited exceptions, oil, NGLs and natural gas reserves may only be classified as proved undeveloped reserves if the wells developing such reserves are scheduled to be drilled within five years after the date of classification. The development timing of our oil, NGLs and natural gas reserves is based upon numerous expectations and assumptions, including the allocation of development capital; anticipated costs to drill, complete and operate our wells; and anticipated commodity prices. Our development expectations and assumptions are subject to change and proved undeveloped reserves may be reclassified to unproved reserves at any time. Source: 10-k

Ovintiv’s shareholders could suffer significantly from any new regulations passed by authorities. The company’s future free cash flow will likely decline if authorities don’t approve or don’t allow Ovintiv’s drilling activities in a timely manner. Finally, accidents or any criminal activity may lead to necessary corrective action obligations, which may decrease the company’s future EBITDA figures:

Failure to comply with these laws and regulations may result in the assessment of sanctions, including administrative, civil, and criminal penalties; the imposition of investigatory, remedial, and corrective action obligations or the incurrence of capital expenditures; the occurrence of delays in the permitting, development or expansion of projects; and the issuance of injunctions restricting or prohibiting some or all of the Company’s activities in a particular area. Source: 10-k

I also assumed an eventual increase in taxes related to oil and gas companies, so that business tax stands at 30%. Also, with a capital expenditures/sales margin between 15% and 20%, 2026 free cash flow will likely stand at $12.3 billion.

If we also assume a weighted average cost of capital of 15%, the sum of future free cash flow would stay close to $6.5 billion. With the previous dramatic events, I believe that traders will be ready to pay an exit multiple of no more than 5x, which implies a terminal value of $5.5 billion. Finally, deducing net debt of around $5 billion, the implied price would be $25 per share:

Ovintiv Trades Quite Undervalued As Compared To Peers, And Analysts Expect Sales Growth In 2022 And 2023

I am not the only analyst noting that Ovintiv trades at undervalued price marks. Most analysts believe that the company should be trading close to $53-$71 per share. They also expect Ovintiv’s EV/EBITDA to decline and get even cheaper in the next three years. Analysts expect that the EV/EBITDA multiple will likely decline from 3.3x in 2022 to less than 3.22x in 2024:

Estimates are also quite beneficial. The market believes that net sales growth will increase by more than 7% in 2022 and 6% in 2023. The EBITDA margin is also expected to increase to more than 51% in 2022, and the operating margin could reach 40%-38% in 2022 and 2024. Let’s note that my two case scenarios were not far from the numbers delivered by other analysts:

As of December 31, 2021, Ovintiv Inc. reports $14 billion in total assets and liabilities worth $8 billion. In my view, the financial statement looks quite healthy. Even without a lot of cash, the company has a significant amount of proven reserves, which will help the company receive financing from banks to finance acquisitions or more R&D efforts:

I also believe that it is convenient that Ovintiv Inc. significantly reduced its long-term debt from $6.3 billion in 2020 to $4.7 billion in December 2021. With less financial obligations, the cost of debt will likely decline, which would increase the discounted free cash flow:

Currently trading under the multiples in the industry, Ovintiv is making a lot of efforts to reduce its debt. Management and analysts are expecting a significant increase in free cash flow in the coming years driven by technological innovation in horizontal drilling and environmental performance. I also see major risks coming from future volatility in the oil price and failure in the assessment of oil reserves. With that, the current stock price fails to represent the future stream of free cash flows. In my view, as soon as investors build their discounted cash flow models, the stock price will likely trend north.

Stocks making the biggest moves premarket: Accenture, Darden Restaurants, FactSet and more
Can You Get a Home Equity Loan Without Fees?
7 Meme Coins to Avoid no Matter What Your Friends Say
Athira Pharma: The Market Is Missing A Potential New Alzheimer’s Drug
3 Stocks to Buy and Hold for 2 Years