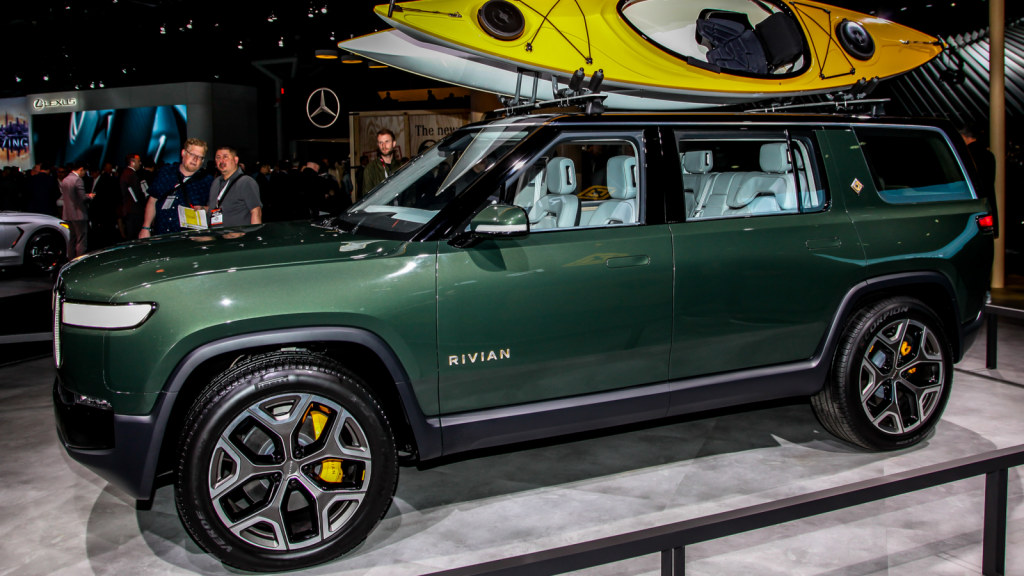 The electric vehicle maker that’s based in Irvine, California went public last November amid much hype and hoopla. It was one of the biggest initial public offerings (IPOs) of the year with the share price rocketing to just under $180 and giving the fledgling start-up a market valuation of nearly $100 billion, more than double the size of the Ford Motor Co. (NYSE:F).

The IPO raised $12 billion for Rivian and was the biggest U.S. debut since Facebook — now Meta Platforms (NASDAQ:META) — market debut in 2012. Eight months later and RIVN stock is down more than 80%, below $26 per share. And the IPO that investors fawned over last November now looks like a catalyst for the stock market’s peak and then descent into this year’s bear market.

Much of the hype surrounding Rivian concerned the early investors in the company, which included Amazon (NASDAQ:AMZN) and Ford.

Amazon, in particular, was a big booster of Rivian and planned to acquire and use the company’s electric delivery vans. However, both Amazon and Ford ended up taking billion-dollar losses on their RIVN stock holdings.

Ford ended up cancelling plans to work with Rivian on an electric truck and subsequently reported a $5.4 billion pre-tax charge related to its RIVN stock investment. Amazon fared even worse, taking a $7.6 billion loss on its Rivian holdings, which led the e-commerce giant to report a net loss of $3.8 billion, its first quarterly loss in years.

Perhaps even worse for Amazon is the fact that the company may not even get the 100,000 delivery vans it is owed from Rivian by 2030 as part of the companies’ agreement.

To be sure, the truck maker is experiencing extreme production problems. Blaming a shortage of needed equipment, parts and supplies, particularly semi-conductors, Rivian has spent most of this year scaling back its production targets. The manager in charge of the company’s production quit at the end of May. Rivian’s latest figures claim that the company will produce about 25,000 electric vehicles this year, which is half the number the company forecast during its IPO roadshow last autumn. However, it’s worth noting that Rivian only produced 4,000 vehicles between January and the end of April this year.

The slowing production and failure to deliver on its forecasts has certainly hurt RIVN stock over the past few months. However, production isn’t the company’s only issue. Rivian is also burning cash at a rate that has alarmed analysts.

While Rivian had $17 billion of cash on its balance sheet coming out of last year’s IPO, it is currently churning through those billions, leading some on Wall Street to question whether the money will carry Rivian to 2025 as the company has forecast.

Rivian is under a lot of pressure to deliver on the 90,000 pre-orders it has signed up for its R1T electric pick-up truck. Consumers paid $1,000 each to reserve an R1T.

But there are even questions about whether demand for the R1T will remain at current levels given that it has a starting cost of $67,500 versus $40,000 for rival Ford’s electric F-150 pick-up truck. The F-150 has consistently been the bestselling vehicle in North America since 1976.

That the “blue oval” is rolling out an electric version of the F-150 that sells for 40% less than the R1T could be enough to persuade consumers to choose Ford or other cheaper alternatives to Rivian, especially if the economy falls into recession as is expected by many economists. Rivian’s executive team cannot say when the electric vehicle maker might turn a profit.

Ford, which was one of Rivian’s biggest investors pre-IPO, has sold more than 15 million shares of the electric vehicle maker over the last few months, dumping RIVN stock at a big loss. That should tell investors all they need to know about Rivian.

The bottom line is that the once-promising electric vehicle maker has not been able to make good on its targets and has cost its investment partners financial pain as a result. Add in the fact that the company is unprofitable and burning through its cash pile, and there’s no good reason for investors to take a position in Rivian Automotive.

RIVN stock is not a buy.