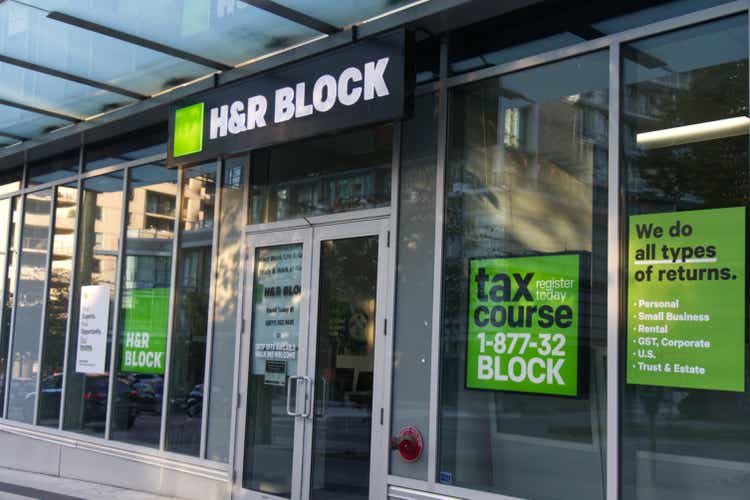 It’s been one doozy of a ride as an H&R Block (NYSE:HRB) shareholder over the last several years. H&R Block caught our interest many years ago as a sputtering yet highly value creative company trading at what appeared to be an attractive valuation. Our analysis of the company identified a clear misunderstanding on the part of the market regarding the company’s competitive position in the tax preparation industry. Pundits and speculators repeatedly warned that the company’s traditional assisted tax preparation business was doomed and soon to be wiped out by Do-It-Yourself (DIY) digital competitors. As the company’s recent performance has made clear, H&R Block not only has its own competitive DIY offering, but the assisted business isn’t going anywhere. Tax preparation is evolving into a blend of DIY and assisted preparation that uses digital tools and a dose of expertise to help clients with what is often the most important financial transaction of the year. With a trusted brand and the most complete tool set to help taxpayers in today’s digital world, H&R Block has proven that it not only will survive, but that it will likely gain market share and grow its business. Investors understandably struggled to see the company’s progress as the pandemic and a change in fiscal year-end clouded the results of the company’s highly seasonal business. But the clouds are clearing, and H&R Block is looking more competitive than ever as it grows its business and pushes into new service areas. A side effect of the company’s performance has been impressive share price appreciation, including a ramp from below $12 in 2020 to over $47. Hanging onto winners can be tempting, but the last step of our successful investment in H&R Block will be selling the company now that the valuation upside has largely evaporated from our conservative view.

The easy money has been made with H&R Block

Our journey with H&R Block started in 2016 when we picked up shares for just over $20. At the time, the company was trading a bit above 10x earnings. It seemed a good deal for a company easily capable of producing a return on invested capital above 20% on a consistent basis that we believed had a bright future. We were aware of the challenges H&R Block faced at the time, but we also thought a dividend yield near 4% was compensation enough to wait for the company to prove itself.

We rode some share price volatility for years. But in 2020, as can be seen in the graph above, we got our big chance. At a mid-single digit P/E ratio, we gobbled up the majority of our shares at approximately $14. The company proceeded to endure the pandemic, invest in its digital product offering and put the company on a path for growth while buying back a large chunk of its own shares. The company’s most recent reporting is evidence of its strong execution.

But the company’s strong execution has likely also contributed to the recent jump in stock price and a consequent jump in valuation multiples. As the far-right side of the graph above shows, H&R Block is now trading at a P/E ratio above 12x and above its longer term average. The easy money seems to have been made at this point.

We certainly wouldn’t blame investors for staying long H&R Block at this point. Our conservative modeling results in a fair value near $50 which we have long viewed as an exit point without any major change in the underlying investment case. But we can also imagine bull case scenarios with higher fair value estimates.

For example, if we believe company guidance for FY23, Adjusted Earnings Per Share (EPS) at the high end should come in at $3.95. If their prediction for double digit Adjusted EPS growth annually through 2025 also proves to be accurate, then H&R Block could be earning $4.75 per share or more in a few years. At that growth rate, the company might deserve a P/E ratio near 15x as it has in the past. It’s a few years out, but 15x $4.75 gets to over $70. Even 15x $3.95 would get close to $60 and mean more than 20% upside from the current share price.

We can also point to some of H&R Block’s current valuation multiples which are actually quite hard to beat. Should we really be selling a solid company with a double-digit Free Cash Flow (FCF) Yield that is trading around only 12x earnings? Maybe not.

But our investment case, which recognizes H&R Block’s ability to generate strong return on investment combined with impressive cash flow conversion, also must take into account certain concerns such as regulatory risk in the tax industry. We also doubt that H&R Block can surprise much to the upside at this point as we just don’t see anemic tax industry growth and modest market share gains pushing growth higher than the company’s mid-single digit projections, inflation aside. And while a PE multiple closer to 15x might be warranted, it’s also entirely reasonable that is stays closer to 12x. For us, the easy money has been made, and we will exit our position close to $50.

We scour markets for companies that achieve admirable return on invested capital with sustainable business models, which we can buy at attractive valuations. Such opportunities often coincide with a suspected misunderstanding from the market regarding a company’s prospects. We feel H&R Block presented such an opportunity in recent years. The tax preparation industry’s transition into a digitally driven blend of DIY and assisted business seemed to coincide with a clouded understanding of H&R Block’s advantaged positioning for exactly such a shift. Financial results perhaps confused or frustrated the few analysts covering the company with heavily seasonal results colliding with a pandemic and a change in fiscal year end. But eventually, the company’s strong positioning became more apparent as impressive cash flow production supported an attractive dividend and a level of share repurchases rarely seen in markets today. More importantly, the company proved it can grow its underlying business even as the tax preparation industry adjusts to a more digital world. But analysts now reasonably project revenue growth and mid-single digit EPS growth going forward. The company’s P/E multiple has gone from 4x in the depths of 2020 to 12x or above today. Perhaps H&R Block has also been a good example of how high-quality companies trading at attractive valuations can protect against downside in tough equity markets. The stock price could continue its climb of course, but for us, the easy money has been made, and it’s time to say thank you and auf Wiedersehen.

7 Nasdaq Stocks to Buy on the Dip or You’ll Be Kicking Yourself Later
Morningstar: Have We Reached Fair Value Yet?
Vontier: A Bargain Waiting For A Catalyst
Gran Tierra Energy: A Solid Play On Foreign Oil
How the Oil and Gas Industry Works