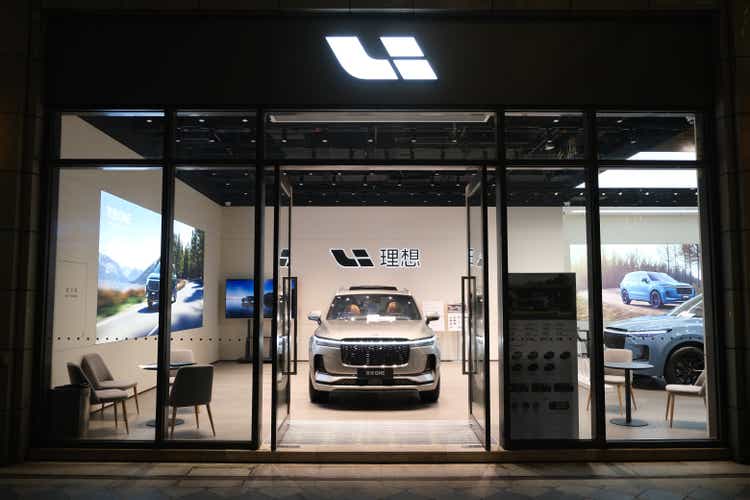 Li Auto (LI) , the growing Chinese manufacturer of EV hybrids, recently released its new SUV, the L9. The L9 was officially unveiled June 21st. The L9 follows its predecessor, the Li ONE. Both the ONE and L9 are sold at flat prices, RMB 349,800 and RMB 459,800 respectively. That comes down to $50,244 and $66,066 using the September 14th RMB/USD conversion rate. The L9 is extremely similar to the Li ONE. Both are six-seater luxury SUVs with families as its main target market. The L9 and Li ONE are also similar in both performance and specs. So much so that there doesn’t seem to be a significant enough difference to appeal to a new target market. Li Auto’s focus on just the SUV market should worry investors who are looking for delivery growth. Why is Li Auto sacrificing valuable R&D dollars into another SUV model instead of deploying it in a new sedan model that could target a new market? The release of the L9 comes at a time when monthly deliveries of the Li ONE are dropping significantly, arising suspicion of market cannibalization.

In my opinion, the similarity of the ONE and L9 has led to market cannibalization, “the loss in sales caused by a company’s introduction of a new product that displaces one of its own older products”. This phenomenon occurs most frequently when a newly released product of a company is very similar to an already existing product in the lineup. This is a risk to Li Auto’s delivery growth. Customers were allowed to lock in orders for their new L9 starting July 16th with deliveries starting the end of August. The L9 has received over 30,000 non-refundable pre-order deposits. Chairman and CEO Li Xiang is very confident in the model and is hoping for up to 10,000 deliveries in September. According to Li Auto, customers who experienced test rides were very satisfied. However, all of this doesn’t take away from the fact that this car seems to be targeting the exact same market as before. Is there enough differentiation between the two products? The current sales trend doesn’t make it seem so. Buyers seem to have switched orders from the ONE to the L9.

Both the L9 and ONE are 6-seater SUVs. The original ONE has a NEDC driving range of 1,080 km thanks to both its 40.5 kWh battery pack and additional fuel tank. The car has the ability to be both fuel-powered or fuel-electric. The ONE is meant for the luxury market with features such as an assisted driving system, luxury interior design, three-row seating and extensive trunk space. The specs of the car include a length of 5,030 mm, width of 1,960 mm and height of 1,760 mm. The car has three energy modes: electric, hybrid or fuel.

The newly released Li L9 is also a six-seater SUV. The car is slightly larger than the ONE but it is a difference that is almost unnoticeable. The L9 has a length of 5,218 mm, width of 5,218mm and height of 1,800mm. The ONE specifications are 5,030 mm, 1960mm and 1,760 mm as mentioned earlier. If the goal is market expansion, it becomes difficult to see why the successor of the ONE is close to being an identical car. The L9 has a CLTC combined range of 1,315 km. The battery pack is slightly larger than the ONE at 44.5 kWh. Given that the range of the ONE was already above 1,000 km which is vastly higher than most customers’ daily needs, I fail to see how another 350km boost in range is a selling point for buyers. Especially when the most popular crossover SUV in the EV space, the Model Y, has a range of up to 511 km. Customers seem to be more than happy with the 511km according to its raving reviews. With the availability of city-wide charging as well as home charging, there really is no need for a range of over 1,000km for the absolute majority of customers. The L9 also comes with many luxury features, just like the ONE. The features are marginally better with upgraded NVIDIA chips, high-resolution LIDAR and Sentry Mode.

After its strongest month of the year with deliveries of 13,024 in June, Li Auto posted disappointing deliveries of 10,422 in July and 4,571 in August. The August numbers especially were much worse than expected, down from 9,433 in August of 2021 and down 56.1% MoM. The only month of 2022 with worse sales was April 2022 when COVID-19 resurged in the Yangtze Delta region and thereby led to severe disruptions in supply chain, logistics and production. It seems that customers have stopped ordering the ONE and are waiting for the L9 instead. The current strategy is not indicative of market expansion. Investors, focused on delivery numbers, are therefore reasonably worried. The stock is down 36.33% from its yearly high of $41.49 set only a mere three days after the June 21st L9 launch event. An entry into the sedan market may have been more optimal. What is even more baffling is the fact that Li Auto is preparing for another SUV launch, the Li L8 in November. It will again be a six-seater or five-seater. The company is releasing a variety of almost indistinguishable products that all go after the same audience.

The current titan in the EV market is Tesla (TSLA). With its Giga Shanghai factory, Tesla has been selling only two models, the Model 3 and Model Y. The first being a sedan and the latter a crossover SUV. Tesla’s product lineup is very straightforward and caters to two different target markets, unlike Li Auto. XPeng (XPEV) has diversified into the P series and G series. Both the P5 and P7 are steered toward the sedan market while the G3i and G9 are SUVs. Nio (NIO) also sells both sedans and SUVs. Nio’s recent sales split in August was 7,551 SUVs and 3,126 sedans. Tesla’s near-record production in Giga Shanghai during August has also put additional pressure on automakers such as Li, XPeng and NIO. Both Li and XPeng reported marginally lower deliveries during August while NIO reported a 6% delivery increase MoM.

Li Auto’s most recent Q2 results showed a loss from operations of RMB 978.5 million. This was primarily driven by much higher operating as well was research and development expenses. Operating costs increased 91.9% YoY to RMB 2.86 billion. R&D costs increased 134.4% YoY to RMB 1.53 billion. The increase in R&D was “primarily due to an increased number of staff and expenses related to the new models being introduced in the product lineup according the Li Auto’s investor relations. The release of the L9 and upcoming L8 is clearly taking a toll on the income statement and it remains to be seen whether this was the right call.

The current product strategy of Li Auto is at a major risk of market cannibalization. The release of the L9 in August and the upcoming L8 in November are catering to the same target market of the Li ONE, while neglecting the sedan market. A significant drop in August deliveries is making investors rightfully worried. Unnecessary complexity in the product lineup makes the supply chain much more expensive leading to pressure on margins and potential widening of financial losses. Investors want to see expanding gross margins while facilitating rapid delivery growth. Instead, the expenses are increasing rapidly while sales seem to be stalling. Therefore, the stock currently seems to be in no man’s land, and we do not feel comfortable starting a position now.