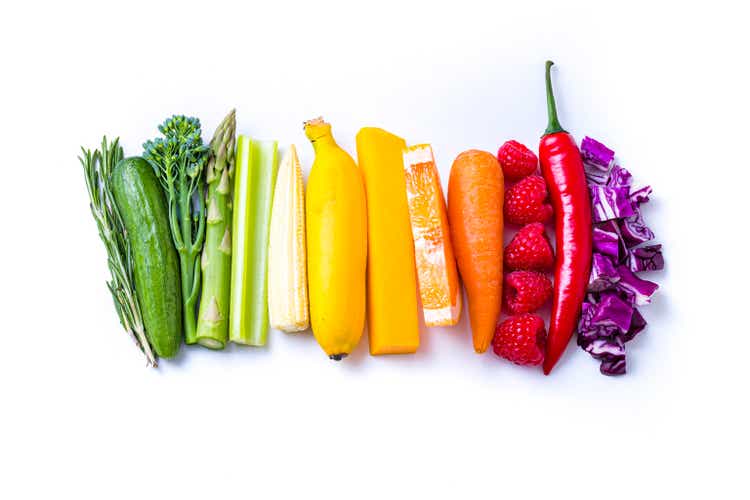 The year 2022 has been very challenging for investors. One of the best performing sectors has been consumer defensive, but finding a stock in this sector that has long-term growth potential is not easy. One such stock that is perfectly positioned for long-term prosperity from a value investor’s perspective is Sprouts Farmers Market, Inc. (NASDAQ:NASDAQ:SFM) .

Sprouts Farmers Market is a US grocer that seeks to target customers who are looking for fresh, minimally preserved, or otherwise processed products made with local, environmentally friendly ingredients. The company has over 370 stores in 23 US states.

The company’s IPO took place in 2013. At that time, the market was optimistic about the future revenue growth and profitability of healthy food companies. However, these expectations were not met and so the stock price has fallen by more than 60 % in the following 2 years since its ATH. Since then, Sprouts has traded more or less in the range of $18 to $28 per share.

It is this experience and poor past performance that may discourage many investors from buying this stock. On the other hand, management, led by CEO Jack Sinclair, has been making changes to the company’s long-term strategy since 2019 that are already starting to have a positive impact on financial results.

Despite unmet expectations, healthy food remains to be a growing industry with strong long-term fundamentals. Interest in healthy foods has been steadily growing.

The overall growth in organic food sales also corresponds to this. In the last 10 years, their total sales have more than doubled. From an initial value of about $26 billion in 2011 to about $58 billion in 2021.

This trend is likely to continue as the generations change. A comparison of shopping behavior across generations shows that only 38% of Boomers (age 55+) regularly look for healthy food alternatives when shopping. Whereas in the generation of Millennials (age 25-34)it is already more than 51% of shoppers and 45% in Gen Z (age 18-24). (If you want to learn more about the shopping behavior of different generations, you can check out this presentation)

Competitors and changes in the long-term strategy of SFM

Just industry growth alone does not mean that a company will thrive in the long term. What also matters is how the company succeeds in the highly competitive retail environment. The company’s competitors can be classified into two groups:

I don’t see competitors in classic retail such as Walmart, Kroger, and Albertsons as a major threat as they target a completely different group of customers.

The customers of these retail giants are predominantly low-price oriented. For example, on Walmart‘s e-commerce platform 41% of customers chose to purchase mainly because of Walmart’s prices. Because of that, the retail industry is one of the lowest margin industries ever. Stores are trying to improve the efficiency of their processes so that they can offer the lowest possible prices to their customers.

By 2019, Sprouts Farmers Market has also applied a similar strategy, trying to compete with these retail giants with its prices. This was also the main reason why Sprouts has seen its net margin gradually decrease from an initial 3.6% in 2014 to 2.7% in 2019.

However, in 2019, new management came in and realized that they cannot compete with these giants on price while maintaining the high quality of their products. For this reason, the management introduced a new strategy that they still use today, based on four main pillars.

Win with target customers – the first and most important point of the whole strategy! It is necessary to understand who these target customers are. They are not, as in the case of Walmart or Krogers, people who are looking for groceries at the lowest possible price. Instead, Sprouts Farmers Market customers are looking for high-value-added food, food of the highest quality, and that is what they are willing to pay extra for. So it means that Sprouts has relatively high pricing power and I see that as one of the big competitive advantages.

The second group of competitors is healthy food competitors such as Whole foods or other local chains offering a similar range of products. These competitors cannot be fought purely on product quality, as their offerings will be more or less similar. In this case, other points of the long-term strategy suggested by management will be important in terms of competition. Changing the layout of new stores so that fewer sales space is required while maintaining the same product range will give the company a better opportunity to control costs. Supporting and building distribution centers is again important to ensure the quality and freshness of products that customers demand.

All of these steps should lead to Sprouts Farmers Market strengthening its competitive position and if you look back at the graph of net margin you will see that these changes have affected it significantly. In 2020 and 2021 net margins were on higher levels than ever since. That was partially due to the COVID and partially due to a new long-term strategy.

Now let’s dive deeper into the company’s financial statements. The first thing I focus on when analyzing a company is the trend in sales over time.

Sprouts sales have been steadily increasing over time. The average annual sales growth between 2013 and 2021 was 12.45% The exception was 2021 when, after a record Covid year, the market cooled slightly and sales declined. However, current results from Q2 2022 suggest that this year’s sales will grow again and should be slightly below the record year of 2020.

As already indicated in the industry analysis, one of the most important factors for Sprouts is that its target customers are willing to pay a premium for higher-quality products. This should therefore also be reflected in the comparison of net margins with other competitors in the sector.

The blue bars represent the difference between the Sprouts margin and the average net margin of companies in the industry. The only year in which Sprouts’ margins were lower than those of its competitors was 2013, since then the company has maintained consistently higher margins than its competitors. At the same time, this confirms the significant impact of the long-term strategy implemented by management, which has had a very positive impact on the company’s net margin development.

Buybacks are the best way to return value to shareholders

In Q2 2022 Sprouts also announced that $501 million of the amount set aside for share buybacks remains, which at the current market capitalization could mean the possibility of buying back another 15% of the current shares.

I usually use estimates of free cash flow and projected future P/FCF values for the share value assumption. In the case of Sprouts, I will make an exception and use the P/S ratio because I think that the company’s projected sales will be a more stable indicator for valuation.

Historically, the P/S ratio for SFM stock has ranged from 0.3 to 0.8. Therefore, I consider it realistic that the P/S ratio could average around 0.5 in the future.

Analysts estimate that sales growth for SFM should be in the current year 4,4% and 6% in 2023. But for our calculation of future value, we need sales per share. The growth of sales per share should be slightly higher, because of the share repurchases that management is doing. Sales per share growth over the past five years has historically been 11.39%. But I don’t really think this number is realistic nowadays. I will be more conservative and expect future sales per share growth to slow to 8% per year.

I understand that an expected rate of return of 7% is probably not going to impress at all, but there is one more quite crucial thing to mention, and that is the value of the beta ratio. The entire consumer defensive sector has a low beta ratio. SFM has a beta of 0.40, which means a very low level of volatility for the stock.

I consider the main risk of investing in SFM a situation when the company will not be able to keep up with inflation and thus maintain its profitability. Thanks to the relatively high pricing power that Sprouts has, this has not yet proven to be the case. However, if the period of elevated inflation lasts for a longer time (two or three years) it is possible that customers will not be able to sustain such sudden increases in food prices and will look to find cheaper alternatives.

Other risks are linked in particular to the strategy of long-term differentiation from other retailers. If this fails in the long term, it would certainly result in a decline in margins, which would lead to a decline in the share price.

Sprouts Farmers Market is a great company with positive fundamentals. Interest in healthy food products is growing. Management is making positive changes to ensure the long-term profitability and growth of the company. Sprouts Farmers Market shares are currently trading at a fair price that realistically offers a potential return of around 8% per year. Due to their relatively low long-term volatility, they may be particularly suitable for investors with higher risk aversion. Also, in the current situation in the stock markets, it may be useful to invest in defensive-oriented stocks just like Sprouts.