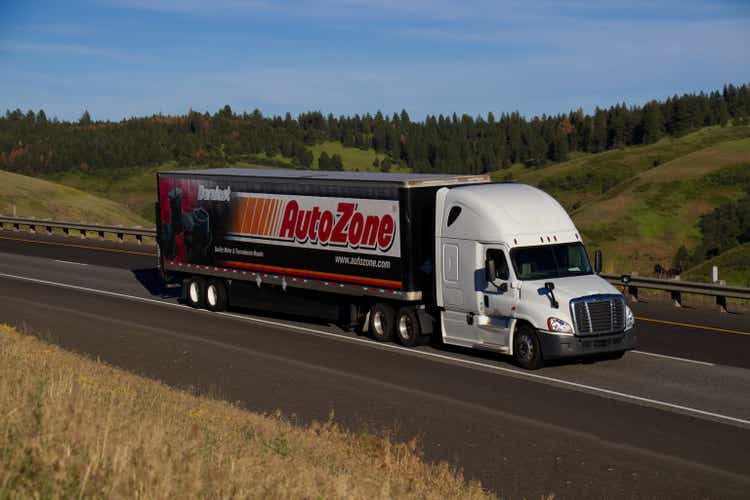 When is AutoZone’s earnings release?

After the release, AutoZone management will host a conference call that you can find here.

In what could be a preview of what’s to come, Advance Auto Parts (AAP) stock slid considerably as same-store sales dropped when it released earnings in late August, as shown below.

AutoZone reported same-store sales growth of 2.6% in fiscal Q3, and the stock has been spectacular in the face of a market selloff, with a 45% spread against the S&P 500 over the past year, as shown below.

I’ve been banging the drum on AutoZone stock because the ridiculous inflation in vehicle prices should push consumers to hold onto their existing cars for longer. This means more repairs and parts will be needed. The rapid rise in new and used vehicle prices is shown below.

Also, AutoZone has a history of massive outperformance during challenging economic periods and often trades in the opposite direction of the broader market. You may have noticed that AutoZone stock is often up or about even on significant down days in the market.

Looking back to the great recession, AutoZone stock thrived, as shown below in a chart from January 1, 2008, through the end of 2012.

…over the last 30 years, there have been four significant shocks to the economy. In all four of those shocks, our performance and our industry’s performance have made a meaningful step up. During those shocks – recessions and pandemics…our business has gone up, and it’s never stepped back down.

Nothing exists in a vacuum, and no investment environment is perfect. AutoZone must contend with higher costs relating to shipping, staffing, and more to keep its robust margins. With competition from Advance Auto Parts and O’Reilly Automotive (ORLY), passing costs on to the consumer can only be done strategically.

Advance Auto Parts also reported that inflation was a major headwind to consumer spending. AutoZone relies heavily on DIY sales. More than 75% of fiscal 2021 sales were to retail customers.

This metric, also called same-store sales, measures organic sales growth independent of new store openings. AutoZone reported 2.6% growth last quarter, but that doesn’t tell the whole story. This growth was on top of the 28.9% growth in Q3 of the prior year.

Overall same-store sales growth has accelerated through 2021 but will return to Earth this year.

This isn’t the end of the world. COVID-19 stimulus payments and additional liquidity boosted growth in 2021, so investors should expect a return to the mean.

If AutoZone can eke out any growth this quarter, it will be a huge win.

Perhaps the most crucial thing management must do in this economy is manage costs. Costs aren’t just rising for consumers; businesses are paying more for employees, benefits, fuel, rent, and just about everything else.

The company has done well so far. The gross margin in Q3 was 51.9%, just slightly below 52.5% in the prior year. The operating margin fell to 20.3% from 22%. This drop is more pronounced. It isn’t catastrophic by any means, but it is noticeable.

Diluted earnings-per-share (EPS) rose nearly 10% despite the dip in margins due to the company’s prolific stock buyback program. The company has already returned $3.4 billion to shareholders this way through three quarters of the fiscal year. We are talking 8% of the current market cap in less than a fiscal year.

Since its inception, this ongoing repurchase plan has returned $31.2 billion to shareholders and 30% of the current $41.8 billion market cap since fiscal 2017.

The stock price peaked in Q4 at over $2,300 per share, so the company may have strategically softened the buybacks.

This program has given investors an excellent tax-free yield for many years.

This is also peace of mind. If the stock price dips, management can take even more shares off the table for the same cash investment.

What about a stock split?

This is something I have been asked about regarding AutoZone several times. Stock splits don’t affect the fundamental value of a stock; however, when a stock trades over $2,000 per share, many retail investors are priced out or intimidated.

The company hasn’t given any indication of a split; the last time was in 1994. With that said, we have seen several high-profile splits this year, including Alphabet (GOOG)(GOOGL), Amazon (AMZN), and Tesla (TSLA), so you never know. At more than $2,000 per share, it wouldn’t be shocking.

The stock will likely trade based on the same-store sales growth in the short term. This could be an opportunity to pounce if the forward price-to-earnings (P/E) ratio falls to the low end of its historical multiple, as shown below.

Still, a knee-jerk drop isn’t necessarily a negative in the long term. It allows investors to get in at a reasonable price and leverages the stock buyback program. Given the high multiple, there is probably limited upside for those looking for a “pop” on earnings. The better bet is to examine the results and be ready if the stock drops below its average P/E ratio.