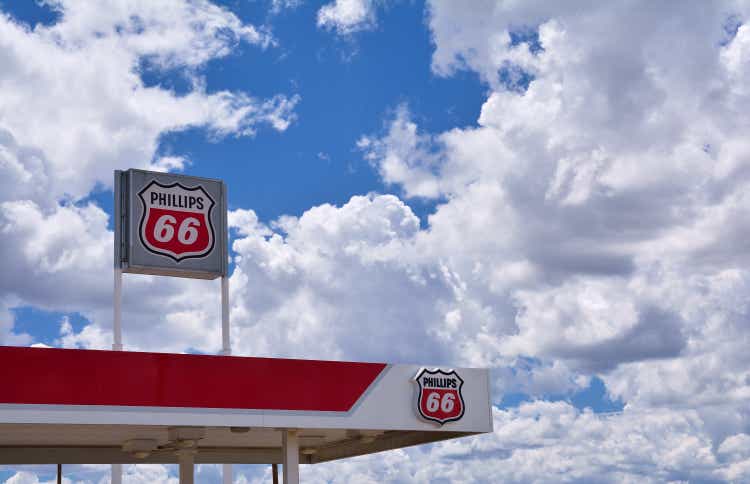 In my last Seeking Alpha article on Phillips 66 (NYSE:PSX), I rated the company a HOLD based on its pending acquisition bid for DCP Midstream (DCP) – see PSX Makes a Big Move, But Enbridge Benefits More. However, since the bid for DCP was announced on August 17, PSX stock has dropped almost $9/share, wiping out an estimated $4.3 billion in market capitalization based on the 485 million average fully-diluted shares outstanding as of the end of Q2. That is more than half the value of the DCP bid, which at $34.75/unit was estimated to value DCP at ~$7.2 billion. While refining crack margins have weakened somewhat, PSX is still emphasizing diesel production due to its higher distillate yield as compared to its peers. Meantime, NGLs pricing is still relatively strong (see graphic below) and investors can expect an announcement any day that PSX’s new 150,000 Frac4 unit has come online and is in-service. Indeed, the benefits of PSX’s strategy to diversify away from Refining to grow its Chemicals and Midstream operations is going to pay dividends going forward (literally and figuratively). The company has excellent dividend growth potential considering the current dividend obligation is only ~30% of mid-cycle FCF of an estimated $6 billion. Bottom line: combine these developments with a very attractive 4.7% yield and I am upgrading my rating on PSX from HOLD to BUY.

As most of you know, in 2020 PSX’s refining operations took a big-hit from refined product demand destruction caused by the pandemic. That being the case, the company took on ~$3.7 billion in additional long-term debt at year-end 2020 as compared to year-end 2019. However, a general recovery in 2021 combined with a very strong 1H of this year has enabled PSX to pay down long-term debt from $14.66 billion at year-end 2020 to $12.44 billion as of the end of Q2. In addition, the company had $2.8 billion in cash & cash equivalents at the end of the quarter:

As can be seen from the graphic above, the company has done a solid job of removing the “pandemic stress” from the balance sheet and net debt has already returned to pre-pandemic levels.

In addition to paying down debt, the strong 1H of the year enabled Phillips 66 to restart share repurchases ($66 million of share repurchases in Q2) and increase the quarterly dividend by 5% in May to $0.97/share.

Prior to the pandemic, Phillips 66 had proven itself to be one of the most shareholder friendly companies in the S&P500 since its spin-off from ConocoPhillips (COP) back in 2012, with strong dividend growth and share repurchases that have retired 23% of the shares over the past decade:

Over the past 5-years or so, Phillips 66 has also intentionally been making large investments to grow its Midstream & Chemicals Segments in order to diversify away from being so dependent on the cyclical Refining Segment. We can see the benefit of this strategy by the following graphic:

Note that in the first six-months of last year, the Refining Segment posted a $1.77 billion pre-tax loss while the Midstream, Chemicals, and M&S Segments combined to deliver $1.93 billion in pre-tax earnings. In Q2 of this year, with a huge recovery in its Refining operations ($3.04 billion in pre-tax earnings), Chemicals results sagged from the previous quarter, but Midstream and M&S Segment results were very strong. The point is, PSX today is a much more diversified company as compared to a few years back. In fact, on a mid-cycle basis that is expected to deliver $6-$7 billion of CFO annually, a bit more than 50% is now expected to come from operations outside of the Refining Segment.

Note that the company expects to generate mid-cycle FCF of an estimated $6 billion. That equates to ~$13/share based on the average of 450 million fully-diluted shares outstanding at the end of Q2. Considering the current dividend is only $3.88/share – or a $1.75 billion annual dividend obligation – there is obviously room for significant dividend growth and share buybacks.

It also leaves room for a significant strategic acquisition – like the company’s recent bid for DCP Midstream that was discussed in my previously referenced Seeking Alpha article. Note that DCP is currently trading at $38.29/unit, ~10% above PSX’s $34.75/unit bid. That being the case, I would expect a transaction on the order of ~$8 billion, or roughly 20% of PSX’s current $38.8 billion market cap.

The reason I see DCP as a “strategic acquisition” is because PSX needs to firm up feedstock supply for its new 150,000 bpd Frac-4 unit which, as we learned on the Q2 conference call, is expected to go in-service before the end of Q3 (i.e. very soon):

During the quarter, we continued to focus on operating excellence and advancing our strategic initiatives. In Midstream, at the Sweeny Hub, we expect Frac 4 to start up late this quarter. The total project cost for Frac 4 is expected to be approximately $525 million.

So, Frac-4 is going to soon transition from a significant cap-ex line-item to generating strong cash-flow.

Meantime, as I explained in the previous referenced article on DCP, investors should expect that the DCP JV between PSX and Enbridge (ENB), is likely to be completely dissolved in a subsequent transaction if and when PSX is successful in buying all of DCP’s outstanding units. While this may appear to be more beneficial to Enbridge in the short-term, in the long-run it is going to enable PSX to fully integrate the NGLs value-chain from wellhead to midstream to CPChem and to the LPG export facility. Which is a segue into the next topic.

Also, with the current global energy crisis as a result of Putin’s war-of-choice on Ukraine, which broke the global energy (and food…) supply chain, investors should not forget that PSX has the Freeport LPG export terminal. As we also learned on the Q2 conference call, PSX’s Freeport LPG export facility loaded 240,000 bpd during the quarter. And note the price of propane is still very strong:

So the Freeport LPG export terminal has been – and will continue to be – an excellent midstream asset. Note this asset also dovetails nicely with the DCP NGLs feedstock-supply thesis.

In combination with PSX’s strong position in diesel refining, its strong Chemicals & Midstream operations are likely one reason why earnings estimates have been rising (even as the stock has been falling):

Note current consensus is for $16.26/share in earnings this year. With the stock currently trading at only $82, that is a forward P/E of only 5.0x. Considering PSX has repaired it balance sheet and currently yields a very attractive and investment grade safe 4.7%, that is a very low valuation level even if there is a recession on the horizon.

At this point, the biggest risk on the horizon is a recession that could cause refined product demand destruction and lower refining margins. However, I doubt any recession will come close to matching the 2020 market disruption caused by the pandemic – one which PSX navigated with relative ease and has arguably already fully recovered from.

Another risk would be if PSX overpays (or is perceived to overpay) for DCP – which the market would likely find as a negative development. That said, much of that analysis is likely already in the stock considering it is down ~$9/share since the announcement of the bid.

Meantime, the price of high-density polyethylene (“HDPE”) has been weakening since May and could drop further if the global economy takes another leg down:

I mention this because CPChem, the 50-50 Chemicals Joint-Venture between Chevron (CVX) and Phillips 66, is a leading global producer of polyethylene. In a further example of diversification away from the Refining Segment, note that PSX’s Chemicals Segment delivered $2.5 billion in adjusted EBITDA last year and another $1 billion in the 1H of this year.

PSX’s strategic decision to diversify away from Refining with more Midstream & Chemicals investments is paying off. The company now has strong EBITDA and earnings coming from its non-refining segments and that lowers full-cycle risks for investors. The company has already brought its net-debt back to pre-pandemic levels and, as a result, is in a great position to benefit from strong earnings and FCF this year to reward shareholders and make the strategic DCP acquisition – which will help it solidify feedstock for its chemicals and midstream operations.

The current dividend obligation only equates to an estimated 30% of mid-cycle FCF – meaning there is significant dividend growth potential going forward.

I am raising my PSX rating from HOLD to a BUY based on PSX’s investment grade balance sheet, low valuation level, very strong 2022 full-year earnings and FCF generation, and the new 150,000 Frac-4 unit, which investors can expect an announcement any day that Frac-4 has gone in-service.

I’ll end with a PSX stock price chart since the company was spun-off from COP and note that it is still significantly below pre-pandemic levels despite numerous Chemicals & Midstream assets going into service during the interim: