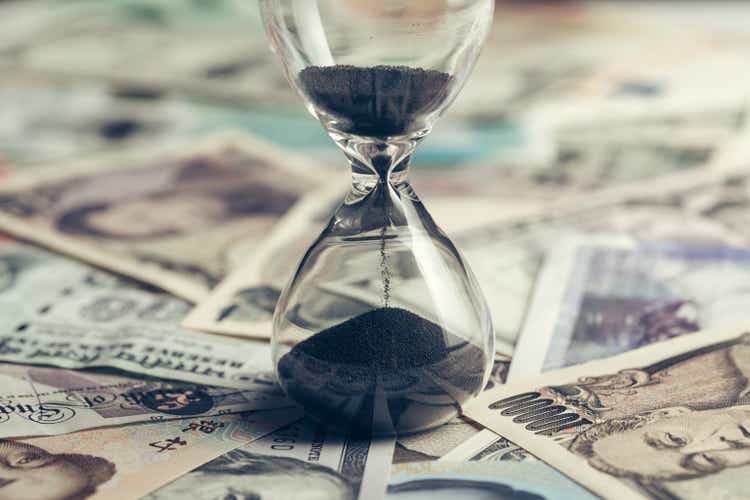 This bear market has hard-hit Meta Platforms (NASDAQ:META), and the stock price at this point doesn’t make sense, even under a worst-case scenario. META is highly profitable, has ways of increasing growth in the short term and is making great strides in what will surely be one of the largest markets of the future.

Meta Platforms has been one of the worst-performing high-growth tech stocks over the last year. Though there has been a general stock and tech sell-off, META has underperformed its FAANG peers by a margin:

META has even underperformed Netflix, Inc. (NFLX), which has much smaller profitability and faces a very challenging competitive environment. META now trades near its pandemic lows, and this just seems very hard to justify, even with the recent slowdown in growth.

Granted, revenues in Q1 were substantially lower than in the previous quarter, but we also have to account for seasonality here. Overall, the deviation doesn’t seem too out of line with the norm. Forward growth for META is expected to be a healthy 15%, and there are still a lot of levers that the company can pull to fuel growth and profitability.

Despite what some think, I still believe META has a lot more to offer. Even if previous user growth levels are unsustainable, there are still a few initiatives the company can take to improve their revenue and profitability.

But first, let’s look at the revenue breakdown:

META now divides its revenues into two segments. “Family of Apps” and” Reality Labs”. The latter is the part responsible for the AR/VR products, while Family of Apps includes the staple platforms such as Facebook, Instagram and WhatsApp.

As we can see, revenues for the Family of Apps stagnated in Q1, and we can also see that the operating margin was noticeably lower. In Q4 2020, this segment has an operating income of $14,800 million on revenue of $27,300 million. In the latest quarter, with similar revenue, operating income was just under $11,500 million. This is in part due to the updates that Apple made to iOS.

But not all apps are created equal, and even though Facebook and Instagram are struggling with lower monetization, WhatsApp and Facebook Messenger are just getting started in their monetization journey:

Business messaging is an area where we see big potential. We estimate that 1 billion users are messaging with a business each week across WhatsApp, Messenger and Instagram. Click-to-message is already a multibillion-dollar business for us and we continue to see strong double-digit year-over-year growth.

In this regard, META has recently introduced an in-message payment option for Instagram businesses, which gives customers the possibility to pay directly in the app.

Also, if we look at the “Other” part of the revenue, most of this growth was driven by the WhatsApp Business API, according to statements from the earnings call.

Overall, META has many immediate avenues to improve growth, while it is also working on reimagining the whole concept of social media and communication.

META is no longer a revolutionary high-growth company, but it is doing its best it can to stay relevant. 20 years ago, Zuckerberg changed the way we communicate online, and now he is attempting to do the same with VR/AR.

I feel like the metaverse gets a bad reputation lately because it gets associated with “speculative” cryptocurrencies. However, there is nothing speculative about the work META is putting into its highly successful VR products.

According to estimates from IDC (International Data Corporation), the Oculus 2 has sold around 15 million units. On top of that, the Oculus App was the most downloaded App during last Christmas in the US.

VR/AR may not be at a mass-adoption place yet, but it has become undeniably clear that this is a technology that consumers value, and it is only a matter of time before technology and price get to that point where a VR headset becomes a common household item.

Technavio’s latest market report suggests that AR/VR could grow at a CAGR of 46% until 2025.

It seems ironic that everyone fell in love with Facebook for creating something that changed the world, but investors seem to be concerned that the company is trying to do this again.

At this point, the disconnect between META’s valuation and its stock price has reached such a level that even under a very pessimistic scenario, the stock is still worth way more than it is today. Below, I present a 5 year DCF valuation using a Finbox model.

The revenue forecast is based on Seeking Alpha’s consensus estimates. In terms of the EBITDA margin, I have accounted for a substantial drop in profitability. Overall, this model has META achieving a 5-yr CAGR of 9.3%, with an average EBITDA margin of 33.2%.

Even under these pessimistic assumptions, META stock should be worth over $200, which implies a return of over 40%.

Of course, there are risks associated with investing in Facebook. The issue of data protection is a major one, and the challenges the company faces have been highlighted by the latest iOS update. The company is trying to do more with fewer data by improving its AI but it could prove to be an uphill battle.

On the other hand, there’s still room for META to fail in its AR/VR endeavour. With that said, the risk of the market not taking off is substantially lower. META has proved that there is demand for this. The question is whether the company can stay ahead as new startups try to get a piece of the lucrative metaverse pie. Moving forwards, I wouldn’t be surprised to see the company make some strategic acquisitions in this sector.

META has been hit very hard in this bear market, and unreasonably so. The company is still highly profitable, has immediate growth catalysts and is, in my humble opinion, making the right moves by investing in AR/VR. I’m using this dip to increase my position in META substantially.