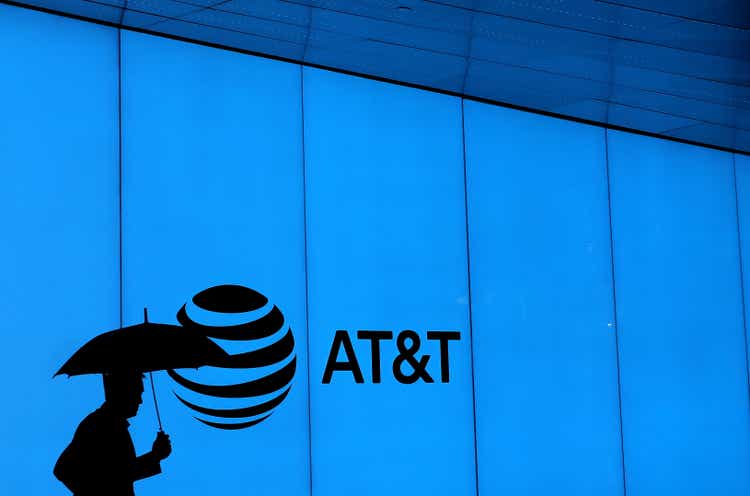 Shares of AT&T (NYSE:T) skidded to a new 1-year low at the end of last week due to accelerating selling after the Fed raised interest rates yet again. With rates rising further due to soaring inflation, investors have become more fearful of buying stocks. With the FED seeking to cool the economy and shares of AT&T coming under pressure, there is a generational buying opportunity for AT&T’s relatively safe 7% dividend yield. The stock has also started to trade at a truly irrational valuation based off of free cash flow (“FCF”) and earnings. Together with a high dividend yield, the valuation makes AT&T’s shares very attractive to investors right now that are not fazed by higher levels of market volatility!

Shares of AT&T are reeling and just dropped to a new 1-year low. Since the beginning of the year, AT&T’s shares have declined approximately 15%…

The sell-off accelerated last week on concerns that higher inflation and interest rates will hurt prospects for economic growth. Especially inflation has emerged as a driving force of growing risk aversion lately. As a large telecom, AT&T is affected by inflation in two specific ways: (1) Inflationary effects are expected to cost the company about $1.0B more than planned in FY 2022 although the company has said that it will offset some of those headwinds with growth in its fiber business, and (2) delayed customer payments for the settlement of AT&T’s bills are related to the rise in consumer prices. Due to the rise in consumer prices, AT&T has down-graded its free cash flow forecast from $16B to $14B for the current fiscal year.

Despite all the discussion about delayed customer bill payments, AT&T is seeing strong momentum in its core fiber business which is growing rapidly. AT&T acquired 316 thousand new customers in the second-quarter and many more customers are likely going to take up AT&T’s offer of super-fast and affordable broadband connections. Additionally, AT&T’s penetration rates in the segment are improving (including new build areas), a healthy sign that the segment can deliver more profits going forward. The penetration rate in the second-quarter was 37%, showing 1 PP growth year over year. With net adds and penetration improving, AT&T is operating a promising core business that is set to benefit from ongoing customer acquisition momentum.

Inflation is a wildcard for AT&T and the company may have to lower its free cash flow guidance again if consumers continue to struggle with the settlement of their bills. In the second-quarter, AT&T’s adjusted EBITDA gained just 1.7% to $10.3B, after adjusting for the separation of the content business, and earnings challenges are growing. For the third-quarter, I expect a slight decrease in adjusted EBITDA as inflation continues to weigh on both consumer and business segment while wireless service margins may further decline.

Based off of earnings, AT&T is an absolute bargain and because the stock has dropped so much lately, the P-E ratio is now 17% below the 1-year average P-E ratio of 7.5 X.

There is 1 problem with AT&T…

One problem that I see with AT&T is the large amount of debt that the company has to repay which has piled up due to a lot of expensive acquisitions in the past… and these financial obligations may prove to be a drag on new investment initiatives for the telecom, including in the fiber business. AT&T reduced its net debt by $40B recently due to transaction proceeds related to the WarnerMedia spin-off. Still, AT&T had $129.7B in financial long term obligations on its balance sheet as of June 30, 2022. Including short term debt, the amount of debt owed is approximately 9.7 X FY 2022 free cash flow.

Despite the considerable amount of debt the company has to service, I believe the momentum in the fiber business as well as overall strong free cash flow make AT&T an attractive buy as the shares have seen undeserved weakness lately. As AT&T repays its debt, the leverage ratio is set to improve which could be a catalyst for a new up-leg as well.

Core business strength in fiber, strong free cash flow and an even more attractive valuation are three top reasons to consider AT&T. I have increased my investment in AT&T near 1-year lows and believe the risk profile is heavily skewed to the upside here. While there are free cash flow and inflation risks, and the balance sheet could look better, AT&T’s yield has become too cheap. Because the dividend is moderately safe and AT&T has begun to trade at a truly silly valuation based off of earnings, I believe AT&T today represents a generational buying opportunity (buy and hold forever)!