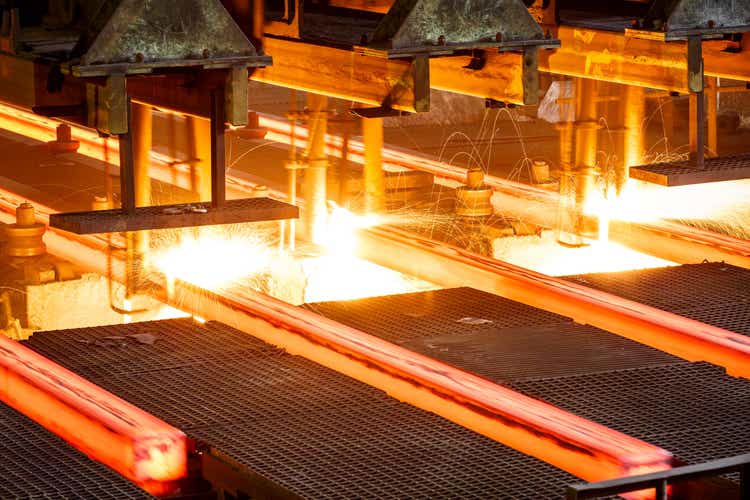 On the edge of a much-feared and increasingly expected global economic slowdown, steel companies are among the least favored investment options. Steel prices can plummet with demand, leading to tough times for smelters.

Steel Dynamics, Inc. (NASDAQ:STLD) stock has been down almost 25% from 2022 highs, mostly due to worries about the global economy arising from inflationary pressures, as well as the negative fallout from the Russian war in Ukraine and the economic war that ensued. I expect that Steel Dynamics stock will continue to follow a downward price trajectory for a while longer, together with the broader market.

However, STLD is a stock I am keeping an eye on as a potential investment opportunity once things calm down. The EU energy crisis threatens to permanently shut down a lot of smelting capacity in Europe going forward, meaning that higher metals prices should be expected in the future once a new economic recovery begins. Steel Dynamics can benefit from dependable and affordable energy in the U.S. This puts it on a strong path to capitalizing on increasingly embattled competitors in places like Europe, even as global steel prices are set to rise on lower supply due to capacity destruction.

What this tells us is that even when things will likely get tough for metal smelters, and as the global economy starts to falter, Steel Dynamics will have a significant profitability buffer that should help it to avoid switching from decent profits to deep, potentially dangerous losses. This is especially likely if the coming economic downturn will prove to be deeper than expected, and longer in duration than thought.

Another aspect that provides this company with resilience in the face of adverse potential global economic times ahead is its healthy debt situation. Its long-term debt stands at $3 billion currently, and it has been steadily holding at this level for the past year. It is equivalent to about a quarter of its market cap. More importantly, it is only equivalent to about a quarter of the revenue Steel Dynamics earned in the first half of the year, meaning that for the full year it will probably add up to less than 15% of total revenues.

Even as its competitors in Europe and elsewhere are on the verge of shutting down due to exorbitant energy prices, Steel Dynamics continues to benefit from reasonable energy prices in the U.S. & Mexico.

As we can see, the EU is by no means a dominant global steel producer. Having said that, it accounted for 8% of total global output in 2021. The most recent reports suggest that about 3 million tonnes/year worth of capacity is currently offline, mostly due to unsustainably high energy prices, amounting to about 1% of the total. It is still a small decline, relative to other industrial sectors, where, for instance, aluminum smelting declined by 30% so far.

The coming winter will probably deliver a much harsher blow to Europe’s steel mills, beginning with government-mandated shutdowns. Many steel mills will never reopen next year because Europe’s energy crisis will not end with winter. The latest developments on that front include the blowing up of the Nord Stream gas pipelines, which some reports suggest will never be used again as a result of the damage. The EU is now stuck with the prospect of having to bid up the price in the LNG markets in order to win deliveries that are otherwise stuck in long-term contracts. This situation translates into very high energy prices for the foreseeable future in Europe.

Furthermore, Russia’s steel exports are being targeted for sanctions. Some of the steel is being diverted to Asia but Russian steel producers are also cutting production.

It is true that on the other side of the European equation we have the prospects of severe demand destruction, as Europe’s economy is now showing signs of not only deceleration but arguably permanent deindustrialization. At some point however the global economy will recover, while the gates to many of Europe’s steelmaking facilities will probably remain permanently shut, and we should also expect sanctions on Russian steel to continue for the foreseeable future.

With Russia’s energy exports pivoting to Asia, which is by far the most dominant region in terms of steel production, Asian steel producers should in theory experience comparatively low energy bills, when measured up against Europe’s increasingly dire situation. Having said that, North American steel producers may find that their own energy bills may be lower not only compared with whatever remnants of an industry that will be left in Europe a few years down the road, but even compared with Asian producers. In the end, most Asian countries are net energy importers, which is not the case with the U.S. or North America as a whole.

As I pointed out in a recent article on Shell plc (SHEL), the continued integration of regional energy markets through developments like the surging trade in LNG is likely to narrow regional energy cost differences. Net energy exporting regions or even self-sufficient regions will always have a price advantage, however, government policies notwithstanding. Whether we are talking about natural gas, oil, hydrogen, or coal, net exporters will always be spared from the costs of transport.

We will also be spared from the extra costs added during bidding wars between regions whenever supplies are short of meeting global demand, which seems to be increasingly the case going forward. So, even though the energy price advantage may decline in time, it will not disappear, which suggests that all energy-intensive industries in the U.S. are set to enjoy long-term cost advantages over their peers operating in other regions.

With the global economy set to enter what increasingly looks like a severe downturn, this may not be an ideal time to buy Steel Dynamics stock, even though it is currently down almost 25% from its 2022 highs as I write this. If the outlook for the global economy does not improve soon, we will probably see some more downside in its stock price, together with most of the market.

At some point, the global economy will do what it usually does and it will show signs of recovery, at which point Steel Dynamics stock is in my view a potentially attractive investment opportunity worth keeping an eye on. Its finances are solid, while the geopolitical developments we see unfolding are mostly creating a situation that is of a net benefit to all North American industrial activities that require a high level of energy input.

It is an advantage that will likely last for the rest of the decade and perhaps beyond. This makes Steel Dynamics stock a potential long-term investment opportunity, which could be picked up at a decent price, perhaps as soon as later this year, or perhaps in 2023.