The Fed’s key interest rate target now stands at 3%-3.25%, way up from 0%-0.25% at the beginning of the year. That means, for all companies, borrowing money is becoming much more expensive. As a result, healthcare companies losing a great deal of money will have trouble obtaining new loans they can afford to pay off, and many such firms will go out of business.

For investors, it’s essential to avoid the stocks of such companies, and some readers may even want to consider selling the shares of these firms short. To help achieve those goals, I will identify three healthcare stocks to sell before they die.

Meanwhile, due to the increase in interest rates and the Fed’s quantitative tightening program, institutional investors will be much less likely to speculate on healthcare companies that are losing a great deal of money and have little chance of making comebacks.

That said, here are three healthcare stocks to sell (or sell short) before they die:

In September 2020, citing the company’s tardiness and the many other coronavirus vaccines that were more advanced than its offering, I wrote, “I remain bearish on IBIO stock at this point.”

Fast forward to earlier this month, when iBio finally announced that it was giving up its efforts to obtain FDA approval for its coronavirus shot.

Meanwhile, as of May, iBio said it “plans to have its lead immuno-oncology asset, IBIO-101, enter [a] phase 1″ trial next year. That means its new lead drug candidate is several years away from generating any revenue. Moreover, the chances of it ever being approved are very low.

Put all of this information together, and iBio is probably heading for bankruptcy, or selling itself for a price way below the current level of IBIO stock.

Teladoc (NYSE:TDOC) seemed headed for deep trouble, and I was bearish on it a couple of years ago when it was flying high. In December 2020, shortly after the company had reported that its sales had jumped 110% in the third quarter that ended in September 2020, I wrote,

given the likely intense competition that the company will face, the high valuation of TDOC stock, and the strong chances of its revenue growth slowing, I suggest that investors sell the shares.

With telemedicine likely to become less popular as worries about the coronavirus fade further and Teladoc still facing a great deal of competition, the company, at best, will have to take out high-interest loans or sell its stock or itself at meager prices going forward. 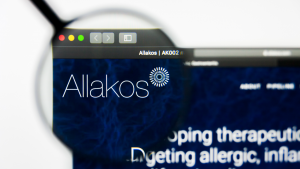 Allakos (NASDAQ:ALLK) is now a beleaguered drug maker. But, like Teladoc, not that long ago, its shares were soaring.

In December 2021, however, two Phase 3 trials of the company’s drug, Lirentelimab, showed that it lowered the number of problematic white blood cells of patients with eosinophilic gastrointestinal diseases but did not significantly reduce the patient’s symptoms.

After analyzing a subgroup of patients without certain conditions from a third Phase 3 trial, the company found that its drug had failed to improve those patients’ symptoms by a significant amount as well. And Lirentelimab did not improve the signs of the entire group of 93 patients either.

For now, Allakos is shifting its focus, planning to report, in the second half of 2023, data from a Phase 2 trial of the drug as a treatment for “atopic dermatitis and chronic spontaneous urticaria.” Unfortunately for the company, any Phase 3 trial results that would make investors and lenders optimistic about Lirentelimab are still likely a couple of years away. Further, Lirentelimab seems to be the only one of the company’s drugs undergoing clinical trials.

In the past 12 months, the company’s free cash flow was -$349.3 million. At the end of Q2, it had just $212 million in cash and $51.3 million in debt. Thus, Allakos is going to have to try to raise funds next year at high-interest rates. And given the data on Lirentelimab, it will probably have difficulty doing so. As a result, it is one of the top healthcare stocks to sell.