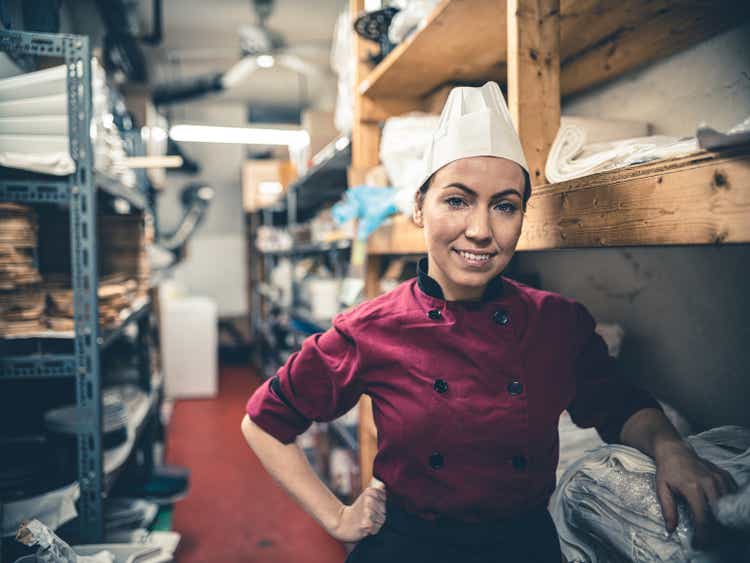 We may have a low-risk long entry in The Chefs’ Warehouse, Inc. (NASDAQ:CHEF), as shown in the stock’s technical chart below. Shares recently gave a buy signal using a bullish crossover of the MACD indicator, resulting in the share price moving above its 10-day moving average. Furthermore, the 10-day moving average has also turned up so it will be interesting to see if the lows of approximately $29 a share printed on the 26th of September last can hold here in the short term. These September lows are about 5% below Chef´s current share price ($30.61).

The downcycle trendline which coincides with the stock´s 200-day moving average provides meaningful overhead resistance at least in the short term. However, if profitability remains strong and keeps growing significantly in CHEF, then it should only be a matter of time before that overhead resistance is taken out.

We state this because we witnessed plenty of encouraging signs in the company´s second-quarter earnings report which was announced at the back end of July. CHEF beat earnings (EPS of $0.51) and revenue ($648.1 million) expectations by quite some distance as consumer demand remained buoyant in the quarter. Gross margin came in higher in the quarter, with strength in the center of plate category superseding the specialty category. Suffice it to say, sales growth (53%+) is not only acquisition-based but also is being organically led (36% Organic growth in Q2). Moreover rising gross margins have the capacity to increase earnings significantly going forward and that is what consensus seems to be pricing in.

In fact, management announced a further raise in guidance on the second quarter earnings call, where top-line sales of approximately $2.425 billion are expected to return $564 million in gross profit. If realized, this would result in Chef’s gross margin returning sooner rather than later, returning to its 5-year average gross margin print of approximately 24%.

Suffice it to say, CHEF’s growth trends are making themselves known in the financials. Cash flow is expected to grow in the firm as recent elevated Capex spending (331% year-over-year growth) drives the balance sheet forward. Book value increased by close to $20 million in the second quarter ($373.7 million), which means this metric has increased by over $40 million (12%) over the same quarter of 12 months prior. Furthermore, the company’s increasing net worth is not being achieved through lower liquidity numbers. Liquidity surpassed $210 million in the second quarter, of which almost $52 million is made up of the balance sheet cash balance. CHEF’s current ratio came in at 2.07 at the end of the company’s second quarter (June 2022).

From a valuation standpoint, it is evident that CHEF’s earnings are not cheap, but we would advise investors to look more at the company’s rising book value (trailing price to book ratio of 3.13) and in particular the company’s rising sales. (Forward sales multiple of 0.48). Although the low sales multiple comes as a consequence of the added sales from the various acquisitions (University Foods, Master purveyors & Alexa Specialty Foods), we believe the market is underestimating the synergies and margin expansion that is going to come off these and future deals. We are already seeing the ramifications of this with respect to how forward-looking earnings expectations have been revised upward in recent times. Suffice it to say, if these trends persist, it will be sooner rather than later before that overhead resistance on the technical chart gets breached to the upside.

If CHEF has enough liquidity in its options, we might look at something like a put credit spread or call debit spread depending on where volatility is in this stock at present. Volatility traders need to be careful, however, as the company is expected to announce its third-quarter earnings numbers at the end of this month, so volatility is likely to expand as we head into the announcement. Stock investors, on the other hand, can buy shares on the open and place a stop right below the recent September lows of approximately $29 a share. We look forward to continued coverage.