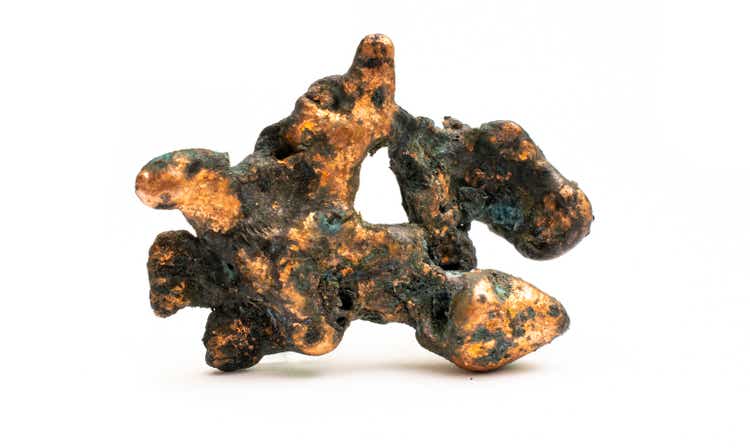 Antofagasta (OTC:ANFGF) is a Chile-focused copper producer with four important copper mines in Chile. None of the assets are fully owned which is fine as it diversifies the risk as I prefer a company to own (majority) stakes in four good mines rather than having full ownership of just one or two. As you can see below, the remaining mine life of all four mines exceeds 10 years with the Centinela and Antucoya mine offering a remaining mine life of respectively 42 years and 22 years.

Antofagasta’s share price has been weak because of three reasons: Uncertainty regarding the Chilean political climate (but the new president does not appear to be as strict as anticipated compared to the platform he was running on), the copper price has obviously come off from its high and the production this year will be lower. Substantially lower (by approximately 10%) although the second half of the year will be much stronger than the first half of the year.

Antofagasta’s primary listing is in London where the company is part of the FTSE 100. The ticker symbol on the LSE is ANTO, and the average daily volume exceeds 1.7 million shares. There are just over 985M shares outstanding resulting in a market cap of just under 12B USD. Although the company’s primary listing is in London, I will not convert the financial results in GBP as Antofagasta reports its results in US Dollars.

Drought and a pipeline incident put the results under pressure

2022 won’t be a great year for Antofagasta. Whereas the company’s mines produced 721,500 tonnes of copper in 2021 and the output has been consistently higher than 700,000 tonnes per year in the past few years, 2022 will be disappointing as the company is guiding for a full-year copper production of 640-660,000 tonnes.

While that’s disappointing, investors also should be aware the output should increase rather dramatically in the second half of the year: The H1 production was less than 270,000 tonnes and to meet the lower end of the full-year guidance, Antofagasta will have to produce at least 372,000 tonnes of copper which would be an increase of almost 40% compared to the first half of this year. We also should see a corresponding increase in the gold and molybdenum output in the second half of this year.

The low production result in the first half of the year was caused by two separate issues: There was a pipeline spill at Los Pelambres which caused the company to reduce its full-year guidance to the lower end of a previous guidance while the same project was also hit by drought as water availability was pretty poor. According to a recent update, it has been raining around the Los Pelambres mine and the company expects the situation to improve but it will likely end up at the lower end of the production guidance. We will see how the mines performed next week as Antofagasta will publish its Q3 production results as well as the 2023 production guidance.

As the average realized copper price still exceeded $4/pound in the first half of the year, the total revenue generated by Antofagasta (on a 100% basis) came in at just over $2.5B, resulting in an operating profit of just over $641M. This included a $207M negative impact from provisional pricing adjustments which had to be recorded in H1 2022 for shipments that set sail in H2 2021. This was included in the revenue (which otherwise would have come in at above $2.7B) and this obviously weighed on the operating profit as well.

Although Antofagasta’s net debt is very low as the $3.4B in gross debt is offset by $2.9B in cash and short-term investments, Antofagasta obviously has to pay interest on the gross debt level. Fortunately the debt was cheap, but going forward, Antofagasta should consider repaying debt rather than refinancing it at a higher interest rate due to changing market circumstances.

The pre-tax income was $680M resulting in $432M net income. As I explained in the introduction, Antofagasta doesn’t fully own its mines and that’s why there is a substantial portion of the profits that’s attributable to minority shareholders in those mines. The net income attributable to Antofagasta was $260M for an EPS of $0.26 per share. All things considered, that’s a pretty decent result despite the setbacks (which I will discuss later in this article).

Antofagasta reported a cash flow from operations of $1.68B, but as you can see below, this was boosted by a $552M working capital release. This means the underlying cash from operations was approximately $1.13B.

From that result, we still need to deduct the cash interest payments ($32M) and the taxes. Rather than using the $621M in taxes paid, it’s obviously more fair to use the amount of taxes owed based on the H1 result rather than taking the taxes related to previous periods into consideration. According to the income statement, $248M in taxes were owed on the H1 result, so that seems to be a more fair number to use.

We also should deduct the $55M in lease payments but add back the $55M in dividends and interests received from investments in associates. The adjusted operating cash flow was $850M in the first half of the year. There also was a $80M dividend payable to the minority shareholders of the respective mines, which further reduces this to $770M (note, I’m not deducting the entire $170M in attributable profit here, as these non-controlling interests also had to contribute their fair share of the growth capex).

Considering the H1 capex was $831M, you could conclude Antofagasta was free cash flow negative. That’s correct, but only because the $831M also includes growth capex. Looking at the breakdown of the capital expenditures on a mine level basis, we see the sustaining capex was just $207M. This means that if we would only look at the sustaining capex, the free cash flow result in the first half of the year was just over $550M or $0.55 per share.

A substantial portion of the $1.9B capex expected to be incurred this year is going to growth. The company has highlighted three projects which should add about 80,000-90,000 tonnes of copper per year. Two of the three growth projects have now been completed so we should see an improvement at Zaldivar and Centinela but the new Los Pelambres concentrator will only be ready in early 2023.

That Los Pelambres expansion was the most expensive one of the three as the company spent about $2.2B on boosting the production by roughly 130 million pounds of copper per year. The two other improvements had a lower capital intensity as roughly 50 million pounds of additional copper production were added at a total cost of less than $400M.

Antofagasta has plenty of opportunity to further increase its output and I think the Los Pelambres Phase 2 expansion is a “given” as Antofagasta can again increase the production rate by 35,000 tonnes per year (roughly 77 million pounds) for a very reasonable $0.5B investment). And while the second concentrator at Centinela makes sense (as this one investment would boost the consolidated output by about 25%), the $3.7B capex will require some careful planning.

And Antofagasta obviously also continues to explore its other assets. The company has established inferred resources at Cachorro and Encierro (for respectively 3.8 billion pounds of copper-equivalent and 9 billion pounds copper-equivalent). A resource is obviously just a first step and although there’s no guarantee these projects will ever evolve into mines, they both seem to already have the critical mass to consider working on economic studies.

On Oct. 19, Antofagasta will publish its Q3 production results, but more importantly, it will likely also provide guidance for 2023. Given the low production numbers in the current financial year and given the completion of some other expansion projects, I expect to see FY 2023 production guidance of in excess of 750,000 tonnes of copper.

The sustaining free cash flow level in the first half of the year came in higher than I had expected, especially knowing the provisional pricing caused a hit to the revenue which was the equivalent of 35 cents per produced pound of copper. While I expect copper production to increase in H2 while the operating cost will decrease, I don’t think we will see an increase in the sustaining free cash flow as the current copper price of $3.40 per pound is again about 10% lower than the H1 copper price (including the provisional pricing adjustments) while the H2 sustaining capex will be substantially higher than in H1. Once the expansion capex dies down in 2023, I expect the reported free cash flow to increase further. And as Antofagasta can look forward to a cheque related to its exit from the Reko Diq project in Pakistan, Antofagasta will likely end 2023 with a positive net cash position, even at the current copper price.

Despite its focus on Chile as sole mining jurisdiction it has operating mines in, Antofagasta remains an attractive way to gain exposure to the copper price. I currently don’t have a position, but I will be looking to write some (out of the money) put options as for instance a P920 for December can be sold for a premium of 25 pence and I would be happy to pick up stock at an enterprise value of just around $10B.