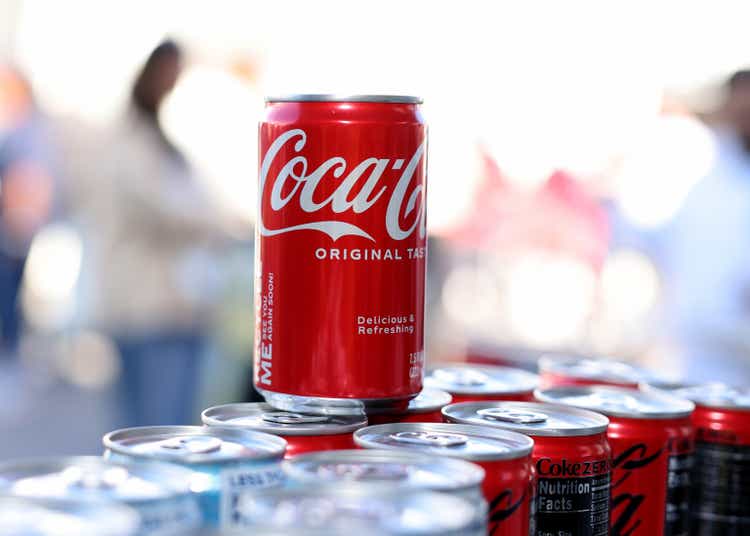 Coca-Cola Europacific Partners (NASDAQ:CCEP) has been one of my favorite Coca-Cola bottlers as this company has the monopoly to produce, market and distribute Coca-Cola (NYSE:KO) products for several regions with a high GDP per capita (Western Europe, two of the three Scandinavian countries – except for Denmark – and Australia and New Zealand. While CCEP was originally solely focusing on European countries, the acquisition of Coca-Cola Amatil in 2021 has expanded its footprint which added the latter two countries.

CCEP has a very liquid listing in the US and in the Netherlands where it’s also trading with CCEP as its ticker symbol on Euronext Amsterdam. As CCEP reports its financial results in Euro, I will use the EUR as base currency throughout this article, and refer to the company’s Amsterdam-listed shares where the average daily volume is almost 30,000 shares per day. If you’re looking for liquidity, the US is vastly superior though as the average daily volume in the USA comes in at approximately 1.4 million shares per day. There currently are approximately 457M shares outstanding, resulting in a market capitalization of 21.7B EUR.

For a better understanding of the business model, I’d like to refer you to an older article as this article is meant as an update to previous coverage.

Q1 is usually the weakest, but Coca-Cola Europacific Partners was still able to report a revenue of almost 8.3B EUR, resulting in a gross profit of 2.99B EUR. That’s an excellent result as the gross profit increased by approximately 44% although the revenue increased by “just” 40%. The other operating expenses increased at a pace lower than 40% as well, and that’s why the operating profit came in at 967M EUR, an increase of almost 86% compared to the first half of last year. While this is the first year the Amatil acquisition is contributing for an entire financial year, it’s the margin expansion that caught my interest.

The Amatil-acquisition was fully paid for in cash and that had a negative impact on the gross debt level, the net debt level and of course also on the interest expenses. Despite this, the pre-tax income almost doubled and the bottom line shows a net income of 675M EUR of which 667M EUR was attributable to the common shareholders of CCCEP. This represents an EPS of 1.46 EUR per share as the share count barely changed (standing at 457 million shares).

All my previous articles zoomed in on the cash flow performance of CCEP to try to determine how appealing the company is, and it only makes sense to have a closer look at the H1 cash flow statement as well.

The total capex was exactly 200M EUR. Higher than in H1 2021 but that’s normal ass CCEP’s asset base has expanded. The adjusted free cash flow in the first half of 2022 (accounting for taxes and the profit and cash flow attributable to non-controlling interests) was roughly 755M EUR, for a FCFPS of 1.66 EUR. That’s higher than the reported net income as the company recorded 386M EUR in depreciation and amortization expenses while the total capex + lease payments were just 280M EUR.

The free cash flow result is pretty much in line with the 1.6B EUR in free cash flow guidance provided by CCEP. This represents 3.5 EUR per share and basically means the stock is trading at a free cash flow yield of in excess of 7%.

As explained in a previous article, 2022 will be the first full year the Amatil division will contribute to the consolidated results of Coca-Cola Europacific partners. Although CCEP paid a rather hefty price for Amatil (in excess of 12 times EBITDA before synergy benefits as the initial offer was increased to get the deal across the finish line), the combined entity is still working towards realizing the potential synergy benefits (although there’s not a whole lot of synergies to be unlocked as there’s very little overlap).

The one important benefit for CCEP is seeing how the Amatil acquisition will smoothen out the seasonality. In Europe, the summer months are the most important period for the sale of Coca-Cola products and Q2 and Q3 are traditionally the strongest with Q4 and Q1 posting pretty weak results. The Amatil acquisition will be helpful as the fourth quarter of the calendar year is its seasonal peak which means it’s now really only Q1 that’s left as the “weak” quarter across all divisions.

CCEP is continuing its 50% dividend policy which means that based on the consensus estimates of 3.30 EUR in EPS for this year, the dividend will be 1.65 EUR per share. As the free cash flow of 3.50 EUR will be higher than the reported EPS, CCEP will retain approximately 845M EUR in free cash flow on its balance sheet and that will help to reduce the net debt which in turn will mitigate the impact of higher interest rates on the market.

The balance sheet currently contains 2.05B EUR in cash and short-term investments but about 12.6B EUR in gross debt for a net debt level of approximately 10.5B EUR. So although retaining 845M EUR In free cash flow sounds like a lot of money, it really represents just 5% of the net debt level. Fortunately CCEP’s debt mainly consists of fixed-rate bonds and the maturity dates are very well spread out. This means the company could likely just repay the bonds as they come due with the 800M+ EUR per year in annual retained free cash flow. This also means CCEP should be very well shielded from increasing interest rates. Just to give you an idea of how important this is: the six year bonds in EUR (the 0.20% bonds maturing in December 2028 shown on the image below) currently have a YTM of approximately 4.5%.

Coca-Cola Europacific Partners remains an attractively priced defensive pick. Thanks to the long-standing relationship with Coca-Cola and the robust free cash flow, the net debt isn’t too worrisome, and over the next five years, CCEP will likely retain about 4.5-5B EUR in net free cash flow which will help to rapidly reduce the net debt.

The commitment to pay out 50% of the earnings as dividends also is interesting. Not in the least because the consensus estimates are using a FY 2024 EPS of 3.89 EUR per share which should result in a dividend of 1.94 EUR per share for a yield of 4.1% based on the current dividend policy. The anticipated EV/EBITDA ratio using the year-end 2023 assumptions (3.1B EUR EBITDA and a net debt of 9.5B EUR) is just 10 which makes the stock very reasonably valued at this point.

I was hoping the share price would drop a little bit further during the recent turmoil on the markets but that could very well be “waiting for Godot” and I think I may enter a new long position in the next few weeks.