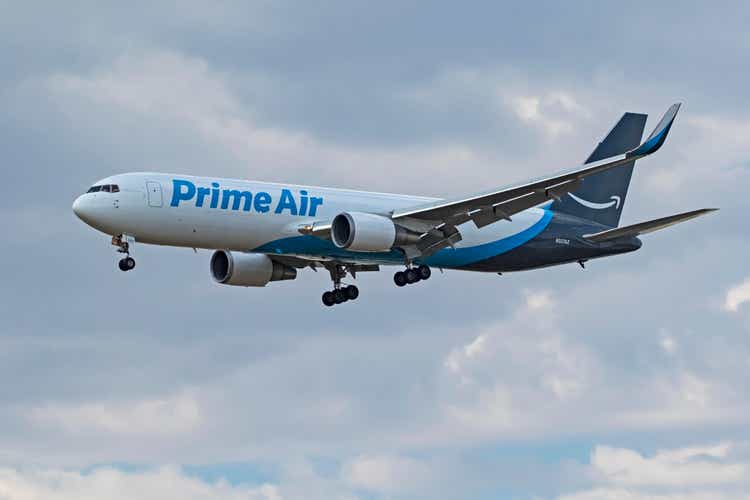 On the 20th of October, Hawaiian Airlines (NASDAQ:HA) announced that it reached an Air Transport Services Agreement or ATSA with Amazon (NASDAQ:AMZN). By some industry followers, this was seen as a surprising move. In this report, I will discuss why this move makes sense but also why it has some unfortunate elements for investors including timing.

A good starting point is that under the ATSA, Hawaiian Airlines will provide crews and maintenance for up to ten Airbus A330-300 converted freighters. These jets are owned by Amazon and will be subleased and operated by Hawaiian Airlines for which it will receive a compensation that consists of a monthly fixed fee per aircraft, a compensation per block hour and a compensation per departure. Depending on the needs of Amazon, more aircraft could be added and the agreement can be extended beyond the current eight years that are agreed on. The ten aircraft will be added over the course of 2023 and 2024.

Diversification of Operations for Hawaiian Airlines

Hawaiian Airlines is an airline with a special business case. Its prime target is to connect Hawaii with the world and do that profitably. In that sense, Hawaiian Airlines has similarities with Emirates that connects Dubai to the world. Differences, however, also exist as Dubai is a transit-hub and sticking to the truth the company at times has not cared much about profitability putting its connecting function at the top of the priority list.

During the pandemic, Hawaiian Airlines learned a lesson as did many other airlines. The company depends on tourism with strong markets in the Asia-Pacific region and during the pandemic those revenue streams dried up. Passenger revenue dropped from $2.6 billion to $664.8 million, and it wasn’t until recently when Japan started easing travel restrictions that things started to look significantly better for Hawaiian Airlines for the longer term. As fleets were grounded, the belly cargo revenue stream also dried up partially offset by higher rates on cargo that was still being transported. In 2021, cargo revenues were up $19.9 million but down $1.1 million compared to pre-pandemic levels.

So, the lesson that Hawaiian Airlines learned is that diversification provides some stability and belly cargo is not always accretive to that stability and other areas such as dedicate freighter operations have to be considered. While an exact revenue is not given the wording from the 8-K suggest that the revenue potential for the 8-year agreement is around $1.8 billion:

Future vesting is based on payments to be made by Customer Parent or its affiliates either under the ATSA or generally with respect to air cargo or air charters, excluding commercial passenger service (“Qualified Payments”), up to $1.8 billion of Qualified Payments in the aggregate.

Why Partner With Amazon?

So, diversification plays an important role for Hawaiian Airlines to even consider doing this. The company believes it has been chosen by Amazon because of its on-time performance and I do believe that with significant experience operating the Airbus A330-200, they are well positioned to operate the Airbus A330-300P2F fleet.

The big question, however, is why would you choose Amazon as a partner. The answer is twofold. The first reason is that if you look at expected e-commerce growth, Amazon is your partner of choice really. The second reason is that this provides a low CapEx opportunity to diversify the business. We have seen other airlines jumping on the cargo hype during the pandemic prettying up a cargo fleet, but that leaves you with the CapEx for those aircraft and all related market fluctuations.

The partnership without the CapEx burden should provide more streamlined revenues and margins as cost items such as fuel and sublease costs are essentially passed through to Amazon. In some sense that provides stability to the business and shields margins somewhat. The CapEx that will mostly be to strengthen maintenance capabilities and tooling and set up a crew base on mainland US.

The results of Sun Country Airlines, which also flies for Amazon does show the stability of the cargo business being just moderately lower even though there have been major cost and topline fluctuations if the airline would be fully exposed to the market dynamics. Sun Country Airlines currently derives around 10% of its revenue from cargo. It is too early to know what the Hawaiian Airlines will be, but the revenue stability driven by passthrough elements, sustained demand and growth for e-commerce over the longer term provides for a compelling diversification for Hawaiian Airlines.

Shareholders Are Paying The Package

What should be kept in mind is that when it comes to companies of scale, it is unlikely that they are going to be providing you with a major margin opportunity. That means that if Hawaiian Airlines wants to make it work, they really need to execute extremely well on their commitment and cost plans, which could ultimately attract more business and bring costs down even further. Either way, Amazon is a dream partner if you look at the prospects of e-commerce but as a party that is trying to control logistics costs, they might be a tough party to please.

What I find somewhat odd is the timing of the announcement. Hawaiian Airlines shares posted a 8.88% gain after it made the partnership with Amazon public and that is all nice and stuff, but one could wonder whether this was the best time to announce it. The outlook for airlines is generally good as I have been seeing in the fresh earnings season and while I believe the Amazon agreement will be good for the stock, what I am not liking a lot is that Amazon also has been given 9.4 million warrants of which 6.3 million warrants are valued at $14.71, which is already 4.2% under today’s market price. Not a huge discount, but Amazon is given an opportunity to buy stocks in really cheap and for the reminder of the 3.15 million warrants, a 30-day moving average at October 2025 or the consummation of the first tranche of shares is finalized. Hawaiian Airlines currently has 51.4 million shares outstanding, and essentially issuing warrants to Amazon will dilute shareholders by as much as 18%.

In some way, this is an unfortunate set up because shareholders get diluted as warrants are vested and exercised and it puts Amazon in a position of being the customer as well as the client. They have interest in buying shares at a low price and keeping prices on their contracts low. One can lead to the other and with that in mind it is not a set up I would be very happy with. In some sense, there is a $1.8 billion revenue potential and Hawaiian Airlines is paying Amazon, its customer, to unlock that potential by diluting shareholders. If share prices roughly double to $30 per share, for $950 million in revenues Amazon could exercise over $187 million worth of warrants and ultimately own 15% of the company. Amazon is known for taking stakes in its logistics partners and in some way they are aligned in their objectives, but I have a hard time seeing why taking a 15% stake at the expense of current shareholders is a good thing as it gives Amazon additional strength in negotiations for follow up agreements and contracts.

I do believe that this could ultimately be a good move for Hawaiian Airlines, but the opportunity for Amazon to acquire stock is not necessarily good for investors who could be diluted by 18% meaning that in order for this to be truly a good move for investors the contribution to earnings should exceed the rate of dilution.

For Amazon stock, I do not see major price movements but this agreement fits in a broader attempt to keep a diversified logistics chain in which it attempts to keep costs down and putting your eggs in different baskets making every party compete for contracts and chances of warrant exercise helps Amazon pushing down the prices.