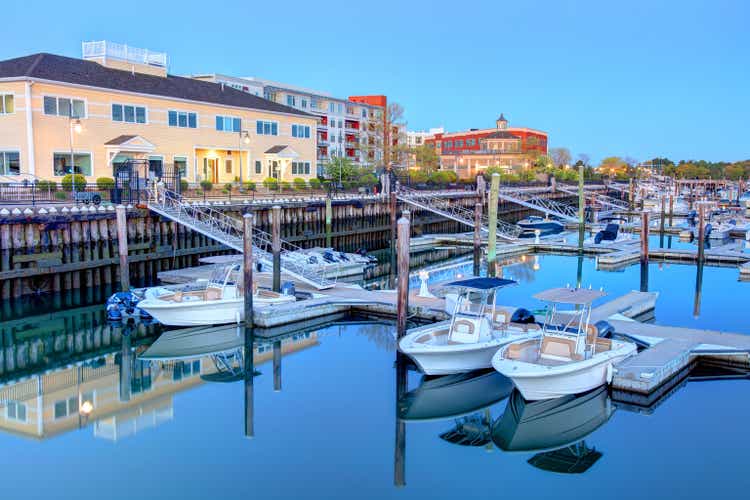 There are thousands of banks in the United States, and hundreds of them are publicly traded. Aside from the too-big-to-fail banks, it can be hard to get excited. There are so many quality regional and community banks out there, so any particular one can get lost in the shuffle.

To stand out, it pays to be the best at something. And Hingham Institution For Savings (NASDAQ:HIFS) does that. It’s the single most efficient multi-branch bank in the United States.

For Q3 of this year, the bank’s efficiency ratio was 25.0%. Like golf, a lower number is better. The median efficiency ratio for American banks is closer to 60%, meaning that for every $10 of net revenue a bank earns, it spends $6 on expenses. Hingham, by contrast, spends just $2.50. This is incredible work by the bank. Even in emerging markets where labor and overhead costs are much lower, it’s quite rare to see efficiency ratios below 45%. Hingham’s ability to maximize its resources is off the charts.

Combine with double-digit top-line growth, and this has been a tremendous formula for shareholders. Since the early 1990s, when the current operating family took the helm, a $10,000 investment in Hingham has turned into $668,800:

As the chart shows, however, Hingham shares have pulled back by nearly half off their recent highs. The bank has been a tremendous compounder in a difficult industry, proving to be even stable during the 2008 financial crisis. Now, however, shares are in a steep drawdown. What’s happened, and does it mark a buying opportunity today?

The reason for Hingham’s recent stock price decline is primarily falling earnings. On a headline reported basis, Hingham’s earnings appear to be down by nearly half, from $23.09 to $11.60 per diluted share over the first nine months of 2021 and 2022, respectively.

At first glance, this would appear to justify the sharp decline in Hingham’s stock price. However, it’s important to note that due to its legacy as a mutual savings bank, Hingham is one of the relatively few American banks that can hold a sizable chunk of stocks on its balance sheet. This has allowed Hingham to have securities such as credit card companies and other regional bank stocks on its balance sheet.

Historically, the value of, say, Visa (V) stock has appreciated much more quickly than a government treasury bond. Hingham’s long-term investments in quality stocks have led to tremendous book value growth through the years.

The drawback to this approach, however, is that Hingham marks its securities to market. So, in a bear market year such as 2022, Hingham has reported losses on its equity holdings, which show up as negative to earnings. 2021’s reported earnings were beefed up with stock market gains and 2022 is suffering from the flip side of that.

What happens if you back out mark-to-market results? Suddenly things look much better. Hingham’s core earnings for the first nine months of 2022 were $20.36 per share, which is up moderately from $18.88 per share for the same period of 2021.

If you’re a long-term owner, you should care about core earnings, not the short-term volatility in the bank’s equity holdings. Is the bank growing its assets, deploying them profitability, and avoiding any catastrophic risk? Largely, yes. There is one other concern worth monitoring, though.

I don’t worry about reported GAAP earnings too much, as security marks will fluctuate. Management has a long time horizon for its holdings and so I don’t lose any sleep about those assets.

Where I am more concerned is with the bank’s net interest margin “NIM”. Historically, Hingham has had a stable NIM which has only moved in a range between 2.7% and 3.4% over the past decade. Management has positioned the balance sheet for a prolonged low interest rate environment and done well with that historically.

However, interest rate increases in the past have clipped earnings a bit due to that positioning. Hingham’s NIM slipped from 3.0% in 2017 to 2.7% in 2019 during the last brief rate hike cycle. Now, however, we’re in a much bigger resetting of rates which is having a more profound impact on the bank.

Specifically, in Q3 of 2022, NIM came in at 2.76%, which was down dramatically from 3.48% for the same period of 2021. Hingham has substantially raised rates it pays to depositors to attract and keep capital at the bank. However, given the composition of its loan book, its loans don’t reset at nearly the same rate that its deposits do. This means that as rates rise, Hingham’s income will compress, at least until its existing loans mature and it can issue new ones at more attractive levels.

This set-up will give Hingham more earnings power when rates start to fall again, which is contrary to many banks. For the time being, however, Hingham is on the wrong side of the rate pendulum and is paying the price.

“[There is] continuing pressure on the net interest margin as the Bank’s balance sheet adjusts to significantly higher short-term interest rates. Such adjustments are particularly challenging for our business model.

During such periods, we remain focused on careful capital allocation, defensive underwriting and disciplined cost control – the building blocks for compounding shareholder capital through all stages of the economic cycle. These remain constant, regardless of the macroeconomic environment in which we operate.”

The second half of Gaughen’s statement gets to what Hingham is doing right. It prides itself on its exemplary loan underwriting. Hingham had non-performing assets of just 0.02% last quarter, which is among the lowest you’ll ever see at a bank. That’s hardly just a product of the strong economy either, Hingham had nearly no credit losses even during the 2008 financial crisis.

The company’s cost control is evident simply from looking at its efficiency ratio. It’s the best in the nation on that metric. In addition to keeping discipline on spending, Hingham also wins from getting high deposits per branch, which reduces overhead. Hingham’s presence in wealthy markets like Boston allows it to gather large amounts of assets and also find plenty of loans to high-net-worth individuals with low credit risk.

And while Hingham is currently having to pay more on deposits, its willingness to offer higher interest rates is bringing in a lot of new business. The company grew both net assets and net loans at a 25% annualized year-to-date rate. 25% growth from a bank is a tremendous figure. Given Hingham’s unparalleled track record of lending without taking credit losses and operating at unmatched efficiency, and you have a winning formula here.

To sum up Hingham’s appeal in one chart, look at tangible book value per share:

As long as tangible book value steadily grows, which all signs indicate that it will, the question is just how much of a premium to pay for shares:

Hingham has been available at tangible book a couple of times, but the most recent was in 2009. Since then, shares have never been cheaper than 1.3x. At today’s price, we’re just 10% above that level. Meanwhile, the historical average has been closer to 1.8x in recent years, and it’s quite possible to move above 2x in a more favorable economy and interest rate backdrop.

Throw in the fact that tangible book value itself is compounding at a steady double-digit annualized clip, and upside here is excellent from this low starting valuation.

Yes, interest rates have moved in a decidedly unfavorable direction for the bank in the short-run, and it has mark-to-market losses on its equity holdings this year as well. For people trading the stock on a quarterly earnings basis, the sell-off makes sense.

The bigger picture is that the bank is aggressively growing its assets and loan book and operates with exemplary levels of efficiency. The long-term formula is a dramatic winner, and the current share price is a big discount from where Hingham was trading a year ago.