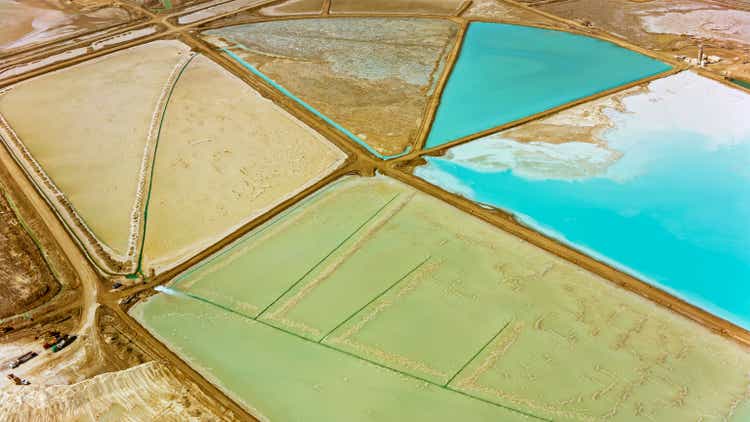 Is your portfolio positioned for a “white gold” rush?

In North America and the U.S. specifically, the hunt for lithium, a key component of batteries used in electric vehicles (“EVs”), has historically trailed a handful of other countries. That includes Australia, which mines more “white gold” than all other countries combined, and China, the leader in both lithium refining and lithium-ion battery production.

But with last week’s announcement that the White House is deploying nearly $3 billion to boost domestic output of EV batteries and the minerals used to make them, it may be time for investors to take notice.

In an October 19 press release, the Biden Administration said it was awarding $2.8 billion in grants to as many as 20 U.S.-based companies to “expand domestic manufacturing of batteries for electric vehicles and the electrical grid.” The lion’s share of the investment-part of the $1.2 trillion Bipartisan Infrastructure Law, signed in November 2021-will go to three companies involved in the production of critical minerals including lithium.

More than $114 million is set aside for Talon Metals (OTCPK:TLOFF), which will use the grant to support the construction of a battery minerals processing facility in North Dakota. In January of this year, the Minnesota-based company entered into an agreement with Tesla to supply 75,000 metric tonnes of nickel concentrate from its Tamarack Nickel Project in Minnesota.

Piedmont Lithium (PLL), one of our favorite industry plays, was selected to receive $141.7 million. The North Carolina-based company says the investment will go toward the construction of a new lithium project in Tennessee, which aims to supply up to 30,000 metric tonnes of lithium hydroxide per year.

Also based in North Carolina, Albemarle (ALB) is the recipient of a $150 million grant. The company says this will help support the construction of a new lithium concentrator facility at its Kings Mountain location in North Carolina. Albemarle hopes to eventually have the capacity to produce up to “100,000 metric tonnes of battery-grade lithium per year to support domestic manufacturing of up to 1.6 million EVs per year,” the company said in a press release.

As context, the entire global lithium industry produced 100,000 tonnes in 2021, according to the U.S. Geological Survey (USGS).

Shares of all three companies traded sharply up on the news last week, with Talon Metals both more than 16%, Albemarle 13% and Piedmont Lithium an incredible 22%.

To impress upon you how much of a game-changer these investments are expected to be, the U.S. has been a virtual non-player in the global lithium game until now, with production limited to a single brine project in Nevada. Besides Australia and China, other big suppliers include Chile and Argentina, with Zimbabwe, Brazil and Portugal gaining ground.

This presents a national security issue, especially if the U.S. is to meet the Administration’s goal for EVs to make up half of all new passenger vehicle sales by 2030. Lithium is quite literally poised to become “the new gasoline.”

As for batteries, Asia is hands down the global leader in manufacturing, with only 10 companies accounting for 92% of the world’s supply. Close to two-fifths of all batteries are produced by a single Chinese company, Contemporary Amperex Technology Co. Limited, or CATL. Earlier this year, CATL introduced its EVOGO system, which allows Chinese EV drivers to swap out batteries at special stations in a fraction of the time it takes to charge them. The company now has plans to expand to international markets.

Driven by increasing global demand, lithium carbonate prices have exploded worldwide. But in China, where the renminbi has plunged to near-record lows against the dollar, a tonne of the stuff now trades at more than half a million yuan, or approximately $75,000. That’s up 13-fold in just two years.

What this means is that Chinese inflation is being exported alongside the physical batteries that CATL and its peers supply to Tesla (TSLA), Ford (F), and other U.S. carmakers. Bringing end-to-end production to the States would not only bolster national security but also stabilize prices. It might also give investors better investment options in more favorable jurisdictions.

Tesla Confirms Plans To Refine Its Own Lithium In Texas

I’ve often said that corporate investment and innovation should be the main driving force behind finding solutions to lower emissions, and I hope that Musk can deliver.

Although Tesla vehicle deliveries in the third quarter came in below expectations, largely due to logistics and shipping snarls, Musk expressed confidence in an “epic end of year.” He also shocked listeners by saying he believed that Tesla’s market cap would one day eclipse the combined market caps of Apple and Saudi Aramco, the world’s two most valuable companies. As I write this, Tesla’s valuation stands at around $661 billion, while Apple and Saudi Aramco’s is $4.5 trillion. No one’s ever accused Musk of lacking ambition.