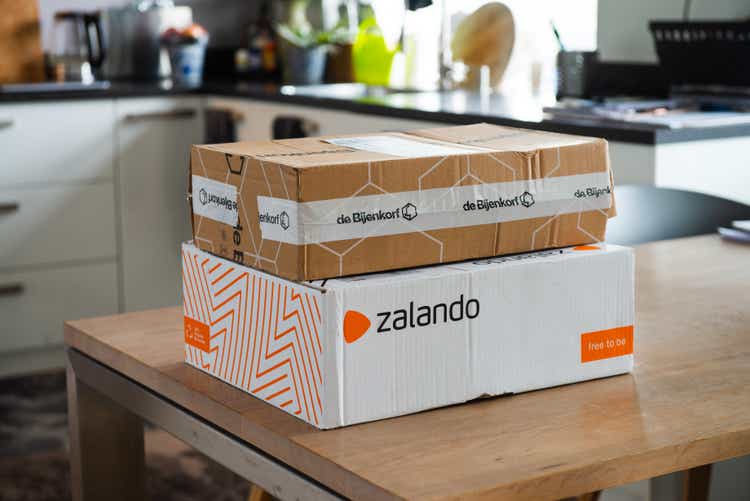 Right off the bat, here’s a number to get started with. Germany-based online fashion retailer Zalando SE (OTCPK:ZLNDY) has seen a CAGR in revenues of almost 24.5% over the past decade. While it wasn’t profit-making for the first two years of the decade, over the last eight years, earnings, too, have clocked around 22% growth. Clearly, it’s an e-commerce success story, which has quite likely not played out fully even now. Apparel e-commerce is expected to grow at a CAGR of 7.9% between 2022 and 2028, which is indicative of the potential for companies like Zalando.

This is promising from a long-term perspective, but the question on my mind right now is the following. Companies across sectors are facing the heat because of a perfect macroeconomic storm, consumer discretionary companies even more than others. Are ZLNDY’s financials robust enough to weather it? Or is it susceptible to losing its way through these times?

Some challenges are certainly visible. The slowdown shows up in its revenue numbers. From a high growth of ~30% in 2021, in the second quarter of 2022 (Q2 2022), they actually shrank by 4%. The speed with which it has lost steam makes me cautious. This is particularly so since the company operates in only the European markets, which haven’t yet seen the worst of the slowdown.

According to the IMF’s latest forecasts released earlier this month, Advanced Europe will grow at 3.1% this year, while Emerging and Developing Europe is expected to show no growth as both Russia and Ukraine see shrinking economies this year. Next year, though, Advanced Europe will slow down to a crawl, even as Emerging and Developing Europe picks up a little. While it doesn’t provide a country-wise split-up of sales, it does focus on the DACH countries of Germany, Austria, and Switzerland, which together accounted for around 38% of its total sales as of Q2 2022. All three of them are expected to wind down significantly in 2023, with Germany being the most affected since its predicted to be in a recession (see chart above).

It might not entirely be a lost year for Zalando, though, considering that some pressures could ease off. Inflation, for instance, is expected to reduce significantly by this time next year. Also, supply chain pressures that have held the company back can ease off as China’s situation improves. Even for the remainder of the year, the company was relatively positive at the time of the release of its last results. It expects revenue to rise between 0-3% this year, which is a break from the decline it has seen so far.

Margins under pressure, debt in check

Zalando’s operating profit margin, however, is expected to weaken further from the already low 2.3% for Q2 2022, already down from 4.1% in 2021. Based on the average of its expectations for revenue and EBIT this year, it’s forecast to be at around 1.5%. The company’s adjusted operating margin is a shade better, in that it’s at 3% for the latest quarter and Zalando managed a positive EBIT for H1 2022 (see table above).

It says in the H1 results report that both inflation and slowing consumer confidence have impacted its numbers. The fact that it had to sell overstock at discounted prices suggests a genuine erosion of pricing power. This indicates that if the macroeconomy takes a turn for the worse, its profitability could be affected for a longer time period. This would also impact its interest coverage ratio, which is at a healthy 4.3x for Q2 2022. Its debt ratios look under control, though, as both of them are under 1x.

Coming to its valuations, Zalando’s price-to-earnings (P/E) ratio is at an eye-popping 276.1x, but it needs to be considered with care. Its trailing twelve months (TTM) P/E covers two quarters (Q3 2021 and Q1 2022) when it reported a net loss. If it reports a profit in the next quarter, it would come up to three-quarters of profit, and its P/E could fall dramatically. Also, if instead the earnings number considered is for the full year 2021, its P/E comes off to a reasonable 12x which is actually a bit lower than that for the consumer discretionary sector at 12.15x. Its ttm price-to-sales (P/S) ratio is also lower than the industry at just 0.6x as is its EV/Sales at 0.6x.

It’s not as if its price has not been affected by a challenged financial performance this year, to be sure. Just year-to-date, it’s down by almost 70% compared to S&P 500 (SP500), which is down by 21%. In fact, since the middle of last year, it has been falling pretty much consistently. Until then, returns on ZLNDY were looking quite good. At the same time, the price decline suggested by its P/E ratio right now doesn’t quite seem convincing. That said, with both growth and profitability underperforming the consumer discretionary sector, there could be some more correction due.

Next week, Zalando releases its third-quarter earnings report, which might just change this picture, though. I’m waiting to see if its results are in line with the relatively upbeat forecasts compared to the performance seen so far in the year. If it does show improvement, there would be a case to dig deeper into the company’s story to see how far it can sustain its performance in what would clearly be a downbeat 2023. If not, it would indicate that the company is in a deeper decline than expected.