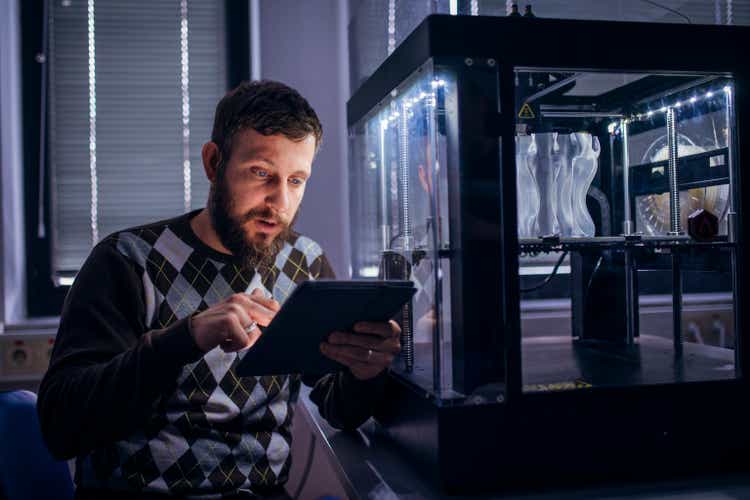 Markforged (NYSE:MKFG), a company in the Additive Manufacturing space, is down beyond what one would call brutal. Year-to-date, the stock is down 61.60% after going public in 2021 via a De-SPAC at a valuation of about US$2.1BN.

Today, the company trades near a market capitalization of US$400 million, and at that point we believe it has become a very reasonably valued company when viewed from the perspective of a long-term investor. The company may not be profitable yet, but it’s moving in the right direction, and in our view has a serious moat. The company, in our opinion, fits a description that one of the most legendary investors ever told us:

Markforged is a relatively new company, having been founded about 10 years ago when it raised US$1.1M in funding. Therefore, our forecast will take into account both Markforged’s quarterly financial data available from the past 2 years, competitors and overall market growth for the industry.

In the limited time that Markforged has been reporting, there have been many positive developments and forecasts. In Q2 of 2020, Markforged managed to bring in US$14.17M in revenue, which grew to US$24.23M in Q2 this year, despite the sharp decline in its share price. During 1H, the company brought in US$46.09M in revenue, but expects revenue between US$100M-US$115M for FY2022, which means revenue should be weighted toward 2H and can also be seen as a positive catalyst.

Gross margins have remained surprisingly high, roughly between 53% and 64%. Margins have fallen recently, but that was addressed in the last earnings call, and was due to “rising labor and material costs.” They also added that the commercial launch of their new FX20 printer is responsible for about 1% margin compression, which could decline in the first quarter of next year. However, freight costs and some raw materials appear to be cooling off, meaning margins could continue to surprise positively in the second half of the year.

Another reason we are bullish on the stock is the excellent capital management the company is conducting, and their clear path to profitability compared to other companies such as Desktop Metal (DM). We think Desktop Metal may have been chasing revenue growth too aggressively because it could not deliver on its plans to achieve positive cash flow without raising additional capital and losing the confidence of its investors.

Especially in an environment of monetary tightening, where a strong balance sheet and conservative capital management should be appreciated. While Markforged has outlined its plans to break even by 2024 without raising additional capital, Desktop Metal could find itself in a liquidity squeeze in times of monetary tightening and high debt service costs. Not to mention that Desktop Metal’s gross margins last quarter were 15%, compared to Markforged’s 53% gross margins.

After Desktop Metal had to raise capital last quarter, it has net debt of about -US$120M, compared to free cash flow of -US$57.45M, which we believe poses a serious threat to shareholders, with the risk of dilution or liquidity problems if management does not take drastic action.

Markforged currently has US$243.22M in cash to support its operations, while free cash flow as of last quarter was about -US$23M. That means the company should be able to sustain itself for at least 10 quarters, or 2.5 years, at its current burn rate without raising cash.

It is also worth noting that in 2021 management said they made a significant investment in infrastructure in R&D and SG&A, meaning leverage in terms of OpEx. This should become more visible in the coming quarters and 2023 as the company works toward breakeven.

It is projected that Markforged will generate between US$174M and 200M in revenue by 2024, with an average estimate of US$184.02M. We believe these near-term projections are quite accurate and adopt them in our thesis. Between 2024 and 2031, we expect Markforged’s revenues to increase in line with the forecast market average of 19% CAGR, to US$621.79M in 2031.

On a P/S basis, there are multiple categories into which Markforged can be bundled. We think it mostly fits into the “machinery” category, although we think it could also be seen as a software company because of their Digital Forge, and basically a digital cloud for parts storage. It also capitalizes on AI, which we think is a major disruptor, with their Blacksmith software automation.

On an EV/EBITDA basis, the company said at the last investor conference that it would probably spend about another US$100M to break even, meaning they would still need to maintain a US$100M+ buffer of cash while bringing in additional cash flow, as they have US$243M in cash.

On an EBITDA basis, we believe Markforged should be able to achieve an EBITDA margin of 15%, which is comparable to the industry average of 14.85% for machinery. We think this estimate is even conservative, given Markforged’s ability to leverage its software division, and given its very high gross margins. If 15% of EBITDA were to funnel trough from US$621.79M in revenue, that would mean an annual EBITDA of US$93.27M.

At an average EV/EBITDA multiple of 16.27x, that would put the company at an enterprise value of US$1.52BN or a market cap of US$1.62BN, taking into account excess cash. A weighted average of our P/S estimate and EV/EBITDA estimate brings us to a share price of $8.80 or a market cap of about US$1.70BN. That would imply a CAGR of 17.76% in terms of price growth, meaning it has a substantial potential to deliver significant alpha above broad benchmarks.

We believe these numbers are supported by Markforged’s moat, its powerful branding, AI implementation, blue-chip customer base, stable management and solid product portfolio. The FX20, for example, still has an order book and some customers have even ordered multiple units.

We think Markforged’s value proposition can generate organic revenue growth quite easily, given their already large user base, broad product portfolio and strong demand across that portfolio.

We also see some serious strength among institutional investors, and believe it may be in our interest to “follow the big money.” Investors like ARK Invest have added Markforged to their Robotics & Autonomy ETF (ARKQ), 3D Printing ETF (PRNT) and Space Exploration ETF (ARKX). Most of those 16.6M+ shares were added in the past 16 months.

Other institutions like BlackRock have also loaded (+5.55M shares), along with State Street at +2.55M shares and popular investor Ron Baron who owns 1.84M shares with Bamco.

The number of shares held by these institutions is quite astounding, as we think many public individual investors liquidated the stock when the hype around the stock waned, as 2020 became the year of the SPAC, with a huge boom in listings and public interest in these SPACs.

That said, there are still some risks to consider in our thesis. One of our biggest concerns is insider sales by the CTO, CEO, GC and 10% owner. However, given the total number of shares owned by all individuals, we believe that these sales are minimal.

These sales also occurred at a share price averaging $4.69 to $7.20, which is well above the current trading range. Perhaps a big trigger to make this stock to move and become more heavily weighted in our portfolio would be an insider purchase, as this would confirm management’s belief in why the company is severely undervalued and where it is headed.

Another risk and reason the stock could fall, in our view, is that it is related to SPACs. This is especially focused in this macroeconomic environment with tightening monetary policy. Many SPACs can be characterized as early stage companies, with low sales or not yet profitable. Algorithms could bundle Markforged with other SPACs that have performed poorly over the past year.

There is also an acquisition that Markforged made earlier this year that is expected to close in the third quarter. General headwinds may also be expected due to the current difficult macroeconomic environment, which may pressure companies to buy a machine and increase their CapEx, just as many companies limited their CapEx during the 2020 lockdowns.

As Markforged pointed out in its Q2 earnings call, 2023 and 2024 should be “very, very interesting years,” involving development and innovation.

We believe the company has significant potential to deliver more alpha than broad benchmarks, and look forward to the third and fourth quarter results.